Over One Trillion Eight Hundred Sixty-Seven Billion in Shares Sold

Another big week for the New Order--let's get to it.

We begin with William Rageclaw, whose name might have a familiar ring to some readers. William purchased several blocks of shares, totaling 1,566 in all, and sent us over the 1,866 billion isk mark. William earns a Supreme Protector's Tip of the Hat™ for his efforts to support the Code in this manner.

At just the right moment, Aiko Danuja increased her own holdings with a purchase of 100 additional shares. This had the effect of sending us past the 1,867 billion isk mark and earning Aiko a Supreme Protector's Tip of the Hat™. Wonderful!

On rare occasions, a miner who owns a permit may nevertheless be the recipient of a gank. Each of these cases is carefully investigated. 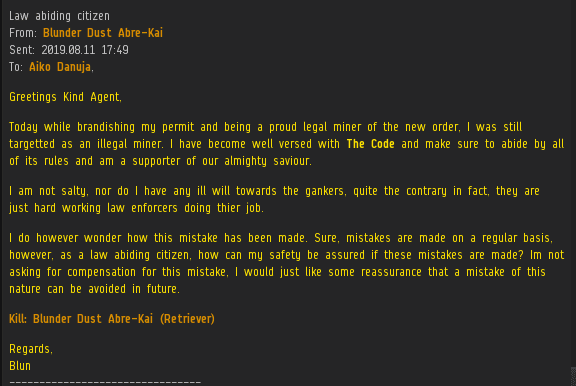 Blunder Dust Abre-Kai lost her Retriever when it was ganked by Agents Mal Warre and Fury al-Shabazz. At the time, she owned a mining permit--which she purchased after being ganked a week earlier by Agents Lewak and Aiko Danuja.

And that is how the matter landed on Aiko's desk.

In response, our Agent requested that Blunder answer a series of questions to facilitate her investigation. 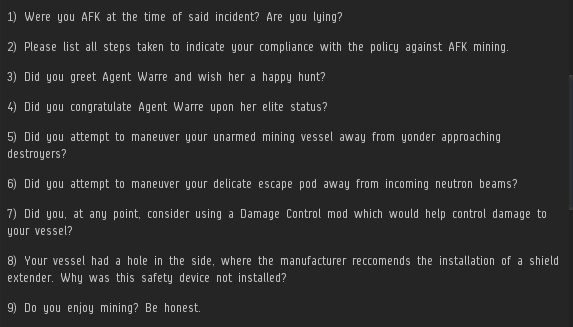 Now the ball was in Blunder's court.

The miner quickly backpedaled, but she complied with the information requests: 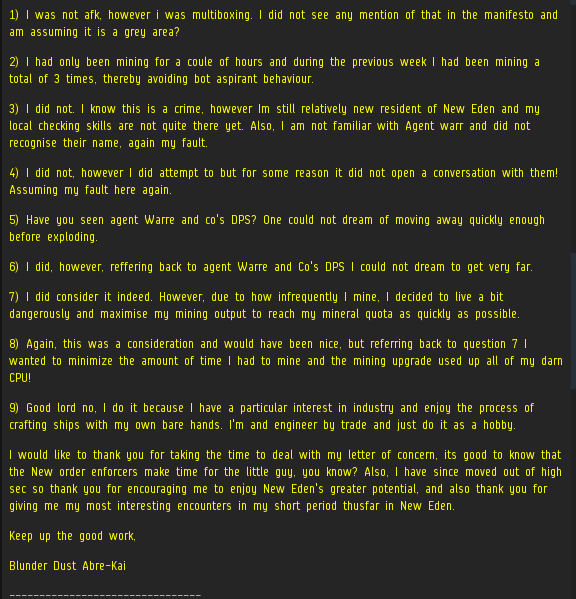 Maybe the reason CCP requires a 15-minute break between ganks is so that our Agents have time to handle all the paperwork involved.

Aiko thoroughly reviewed the matter and found that everything was in order. And that meant--you guessed it--another victory for the New Order!
Posted by MinerBumping at 18:02