Over One Trillion Eight Hundred Sixty-Five Billion in Shares Sold

A lot of people are asking questions about buying shares these days--and a lot of former bot-aspirants are seeing the light. 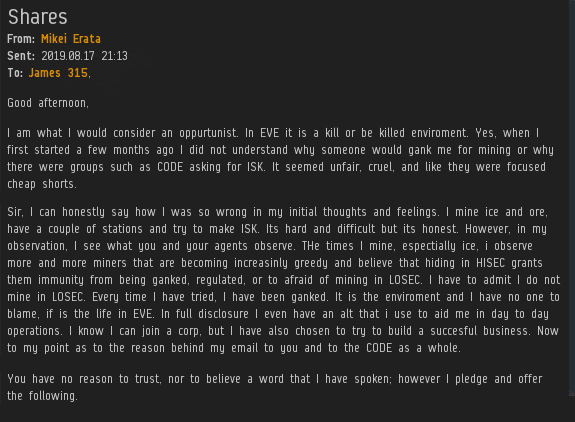 Miner Mikei Erata was, he admits, biased against people who gank miners. But that changed when he opened his eyes and took a good, hard look at highsec.

Now, buying shares is always a good idea. It's an especially good idea now: At a permanent price of 1 million isk per share, they're an ideal hedge against Chaos.


Now for the Supreme Protector's Tip of the Hat™:

Lack of sportsmanship is a serious problem in highsec today.

Tessa Cadelanne couldn't stand the fact that she'd been bested in combat, so she declared the battle illegitimate.

Later, Agent Revis Owen bumped into Tessa. She still held a grudge against him, so she decided to air her dirty laundry in local chat. How embarrassing!

Miners, don't pick a fight with an Agent unless you enjoy losing. This may sound like strange advice, but one can only assume with all of the losing that highsec miners do, that some must enjoy it.

The most powerful piece on the board--or, some might say, the board itself--is the Code. Checkmate!
Posted by MinerBumping at 18:05