Previously, on MinerBumping... Moetel Soikutsu attempted to debate the Code with Agent Aiko Danuja, only to find herself in a very tricky position: Aiko challenged Moetel to explain how she would run the New Order. Moetel struggled. But the rebellious mining CEO still had a few tricks up her sleeve.

Moetel's hypothetical reign as Saviour of Highsec had been a disaster. So she came up with a scenario of her own. 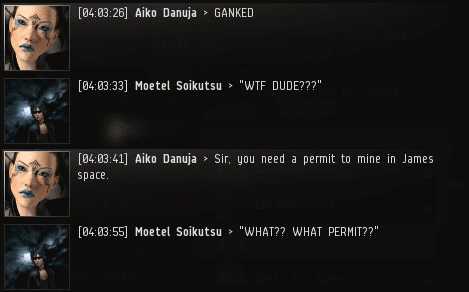 Agent Aiko willingly participated in the simulation. So far, everything proceeded in a realistic manner.

Both Aiko and Moetel convincingly portrayed their characters. Now it was time for Moetel to make her point in the demonstration: 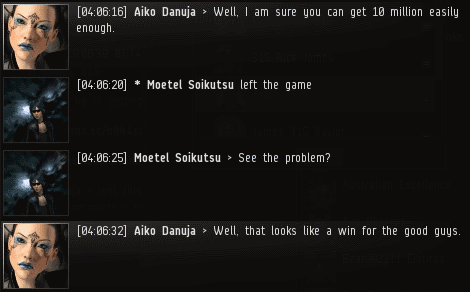 Moetel's imaginary miner quit the game. Even in a simulation engineered by an anti-Code miner, the CODE always wins! Always! 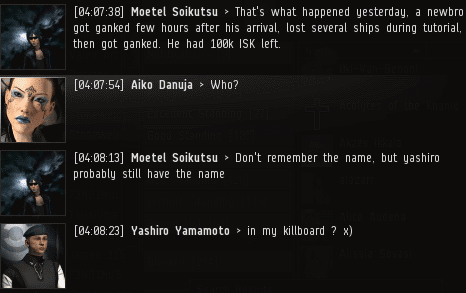 Yashiro Yamamoto continued to observe the debate in polite silence. Yashiro was mesmerized by Aiko's skill in verbal PvP against his former CEO. 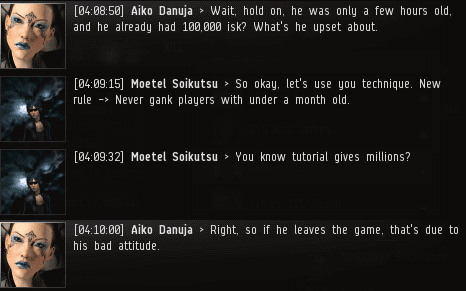 Moetel proposed blanket amnesty for new players. In effect, she sought to ostracize newbies from PvP at the very moment they need excitement and adventure the most.

According to the rebel, ganked miners hate the mighty CODE. alliance and, therefore, they hate the entire game. If true, this is evidence that the Code = EVE.


Moetel Soikutsu > Oh, trust me, he was very salty at first lol
Yashiro Yamamoto > ^-^ of course god save James 315 !
Aiko Danuja > Yes, but he learned what side the bread is buttered on.
Aiko Danuja > We save the miners from themselves.

Moetel undermined her own argument by citing Yashiro as an example of someone who needed to be protected from ganks. Yet there he was--active subscription and all. 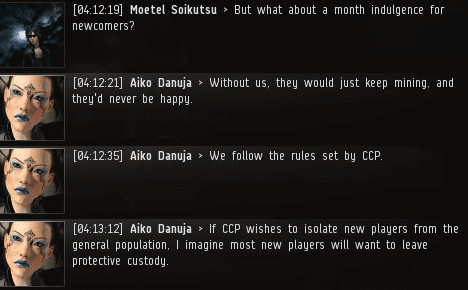 Since the beginning, the New Order has always followed all of the rules set forth by CCP. Indeed, were it not for the kind assistance of a certain GM Banana, the Code never would have been written. 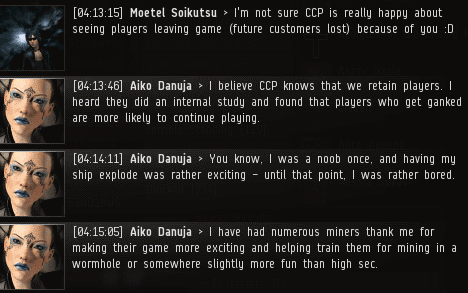 Does CCP truly appreciate the work we have done in keeping EVE alive? Maybe more than you think. But we'll talk about that a little more on another occasion. 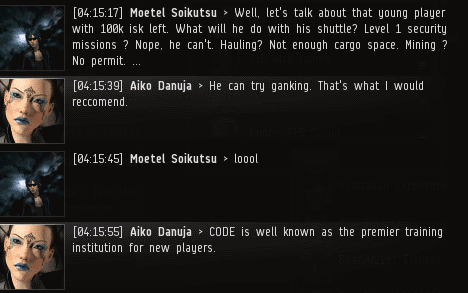 Moetel suggested that violating the Code by illegally PvE'ing in highsec is the only way for a new player to make a living. In her mind, 'twas as if the entirety of lowsec, nullsec, and wormhole space didn't exist. 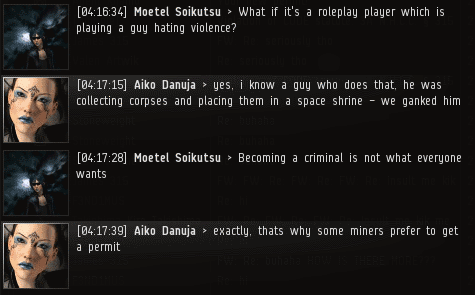 Try as she might, Moetel could not trap our Agent. Instead, the light of the Code burned a hole through the rebel's every argument. Would Moetel give up and buy a permit? Or would she continue to get burned?