Time flies, doesn't it? Prepare yourself yet again for the latest edition of the Highsec Miner Grab Bag!

When miners make excuses for violating the Code, one must parse their messages very carefully. Though it's not exactly clear how, the scare quotes around the word "was" represent a loophole for this miner to excuse his crime of botting.

Keep repeating "in-game" to yourself and you'll get an idea of what it's like to be a GM who has to deal with miner tears all day.

This is one of the better uses of the contact info function that I've seen.

One of the countless tasks that a Code enforcer masters: Separating Russian miner tears from pure gibberish. Here's another example: 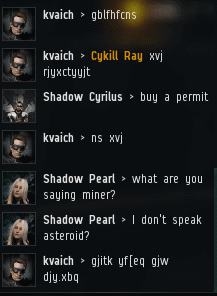 The differences are subtle, but this is actually pure gibberish.

Don't judge 3z richard for his inappropriate statements. He lost a Retriever or whatever so he had to say it. 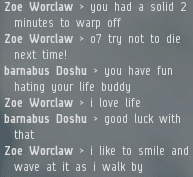 One key difference between Agents and carebears is that Agents are always enjoying themselves, whereas carebears seem to be in a state of perpetual misery. 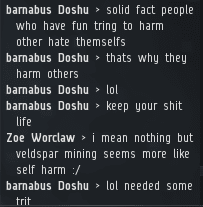 ...And they need a lot of Tritanium for some reason.

Sure thing, shoot me an EVEmail sometime.

Check out the Become an Agent page.

The Agents of the New Order are busy saving highsec each and every day. That kind of heroism doesn't go unnoticed.
Posted by MinerBumping at 18:02