In highsec as in life, there are heroes and villains.

...And they quickly make themselves known. 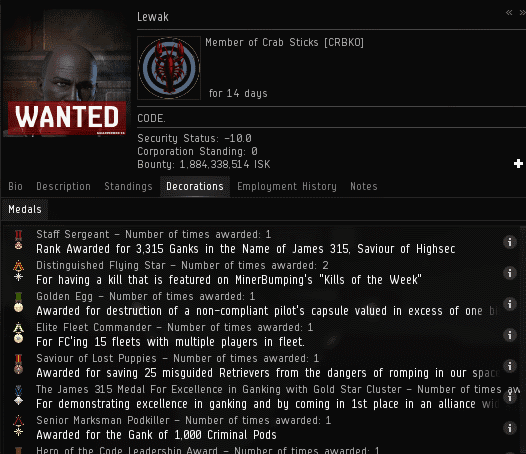 One of highsec's greatest champions is Lewak, a highly decorated Agent of the New Order.

Lewak has heroically slaughtered thousands of bot-aspirants in his day. Even more than that, though--Lewak reasons with them.

Gobloks respond to Lewak's wisdom in many different ways. Some react in anger.

Others react by attempting to bargain. As well as a carebear knows how to bargain, anyway. 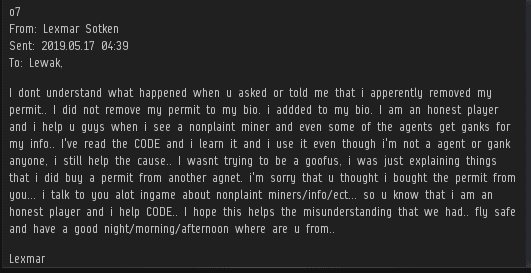 On some occasions, miners claim total innocence. Such claims are processed in accordance with the applicable laws and regulations. We can have absolute confidence that justice is always done when people like Lewak are involved.

Greedy miners never lose sight of their true goal: The accumulation of isk. They don't bother to work for it--if they did, they'd get permits--but they attempt all sorts of manipulations.

They'll claim to be new players, regardless of whether they're new. And if that doesn't work...

...They'll deflect, throwing others under the bus. Miners are perfectly willing to throw entire countries under the bus, if needed.

Failing that, an angry miner may resort to empty threats--the only kind the lazy carebears ever make.

Rebels and skeptics accuse our Agents of driving people away from the game. Yet no one works harder to retain EVE subscriptions than the mighty CODE. alliance.

In the end, EVE comes down to life and death. PvP is a kill-or-be-killed situation. Thanks to Lewak's elite skills and his trusty Code, Lewak does the killing and the dead carebear can only wish death upon him. That's EVE working as intended. But the carebear need not remain dead. He can get another ship, undock, and win in his next encounter--but only with the Code.
Posted by MinerBumping at 18:02