Previously, on MinerBumping... Highsec firebrand William Rageclaw caused a revolt to break out in the Nakugard system, where Agent Alt 00 had been governing according to the Code. When William's Kikimora destroyed one of Alt's gank Coercers, it emboldened the rebellious miners. 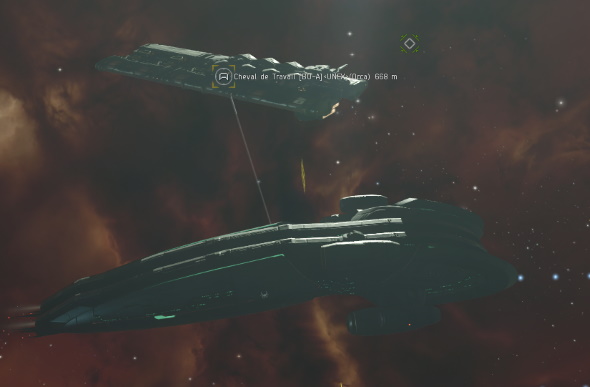 Orca miner Cheval de Travail was thoroughly subdued by the bumping prowess of our Agent's Machariel. However, Cheval refused to buy a permit so long as there was hope of a successful anti-Code resistance movement. 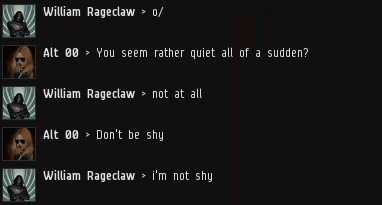 Agent Alt 00 recognized that William was the source of Nakugard's ills. If she could defeat him, then the system might yet be saved. 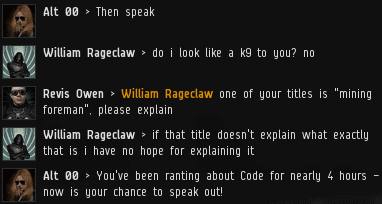 Alt 00 devised a bold strategy: She invited the rebel to speak with some of her fellow Agents in the MinerBumping channel.

Nakugard local chat was given a respite while the debate about the Code moved forward in a more relaxed environment. 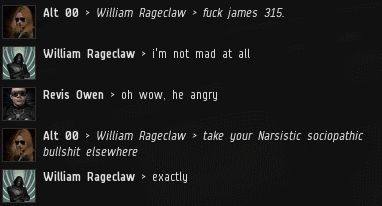 The Agents of the New Order put aside any biases they may have had; they were there to hear William out in an objective and nonjudgmental way. 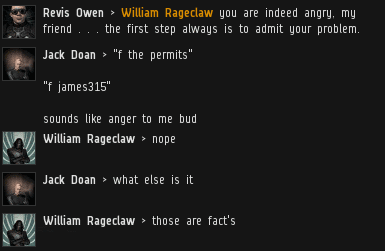 ...And objectively, nonjudgmentally, William was wrong about the Code.

After carefully weighing everything, the Agents were able to correctly determine that the Code was right and that William should absolutely comply with it.

But there was another reason why Alt 00 was interested in having this conversation take place... 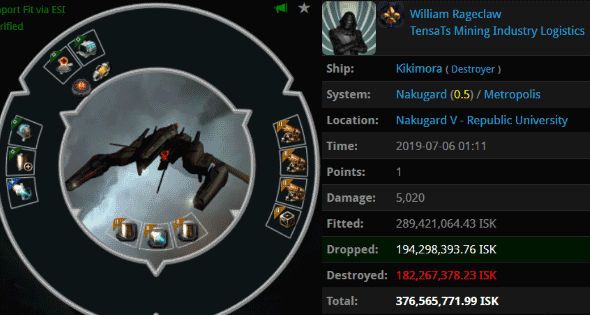 ...Distraction. As William was conferring with the Agents, Alt 00 launched a devastating attack against William's prized Kikimora.

Alt 00's skill during the battle was exceeded only by her sportsmanship after it concluded. William vowed revenge. 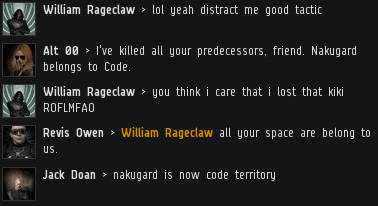 Regardless of William's dreams of retaliation, the truth was that the battle had been decisive. No longer would William be in a position to interfere with Alt 00's ganks. Nakugard was wide open. 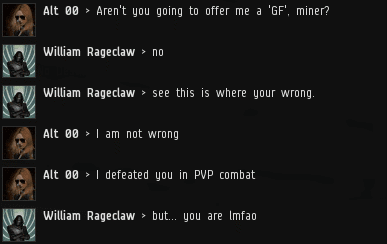 Our Agent's victory was complete. But an Agent of the New Order is never satisfied by just one victory. 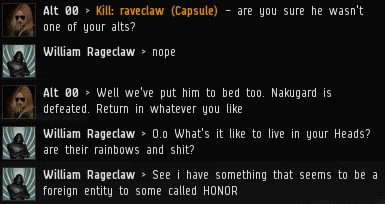 Alt 00 was determined not only to rescue the Nakugard system, but to rescue William himself.