Previously, on MinerBumping... Highsec mining CEO Moetel Soikutsu engaged Agent Aiko Danuja in a lively debate about the Code. Moetel accused Aiko and others of failing to obey the Code, but she was caught off guard when Aiko asked her how she'd run things if she were put in charge. 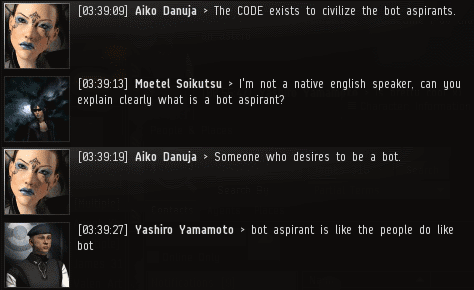 Yashiro Yamamoto watched as his former CEO floundered in the debate. 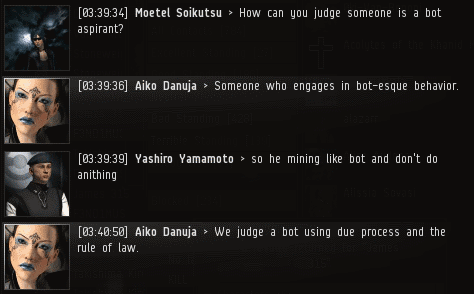 The carebear CEO took a big risk by asking Agent Aiko a bunch of questions to which Moetel didn't know the answer. Aiko's responses only served to show that the Code enforcement process was reasonable and fair. 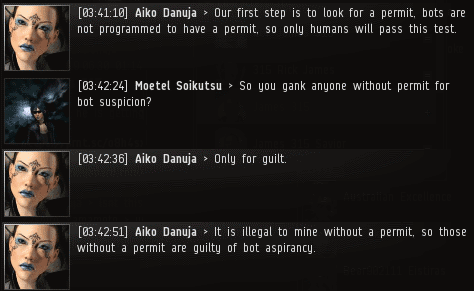 Moetel couldn't allow the conversation to continue like this. It was time to go on the offensive.

Like so many others of her ilk, Moetel pretended that the reason miners didn't own permits was because they didn't know about the Code.

Unfortunately for Moetel, Aiko had trapped her in a thought experiment about what Moetel would do if she ran the mighty CODE. alliance. The miner would be confronted with the consequences of her ideas. 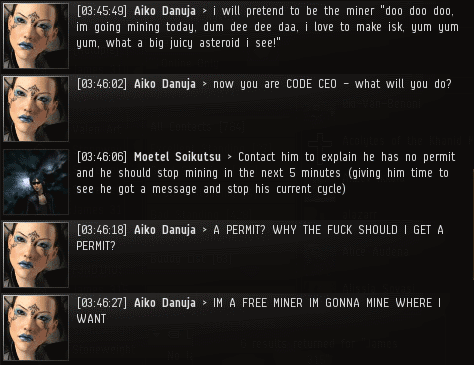 Despite being an elite PvP'er and possessing personal qualities entirely opposite to those of a bot-aspirant miner, Agent Aiko had encountered enough enemies of the Code to know how to convincingly portray one.


Moetel Soikutsu > Explain him why he should get a permit, the costs and benefits
Aiko Danuja > FUCK YOU MOETEL 315 YOU CANT STOP ME FROM MINING
Yashiro Yamamoto > so true x)
Moetel Soikutsu > Tell him that if he has no permit, the next time his cargo will be confiscated (orange standing him if he refuse to get a permit)
Aiko Danuja > THE NEXT TIME? HAH, I WILL GO MINE SOMEWHERE ELSE< YOULL NEVER FIND ME HAHAHAHA

Moetel tried to reason with the fictional (but eerily accurate) miner. But unfortunately for Moetel, rebellious miners are characteristically unreasonable.

It seemed as though Moetel's big idea was to create some sort of universal "Not Orange Don't Shoot" scheme for highsec.


Aiko Danuja > Ok, let's try that scenario
Aiko Danuja > So I'm the miner u warned before and I'm mining
Aiko Danuja > "what are u gonna do? u gonna gank me?"
Moetel Soikutsu > Contacting him, explaining that's the second time he mines without a permit, it's his last chance to buy it before having his cargo seized. If he try to flee, attack.
Yashiro Yamamoto > you are realy so friendly...

So far, Moetel remained confident that her proposals would hold up to the scrutiny of Aiko's simulated Goblok. 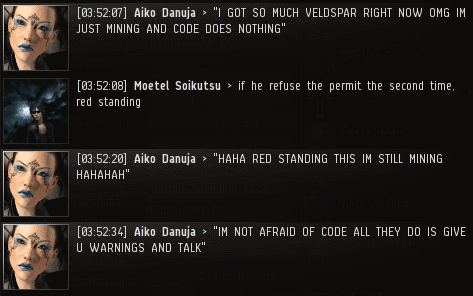 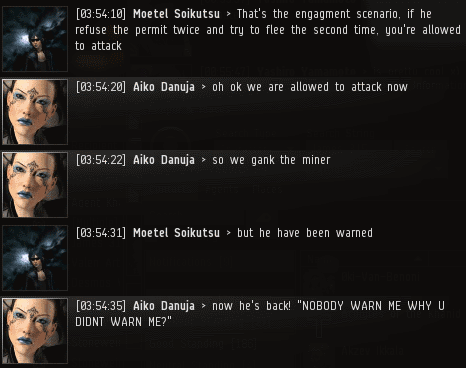 The carebear CEO authorized action, only to find herself right back where she started!

In a matter of minutes, Moetel's version of CODE. found itself strangled by red tape and layers of bureaucracy. But Moetel was determined to find a way to win the argument and prove herself the superior Saviour of Highsec.