Previously, on MinerBumping... Highsec mining corp CEO Moetel Soikutsu was challenged to come up with ways of improving the Code. When she failed, she invited Agent Aiko Danuja to participate in a simulated permit sale. But even in Moetel's own scenario, the Code prevailed. 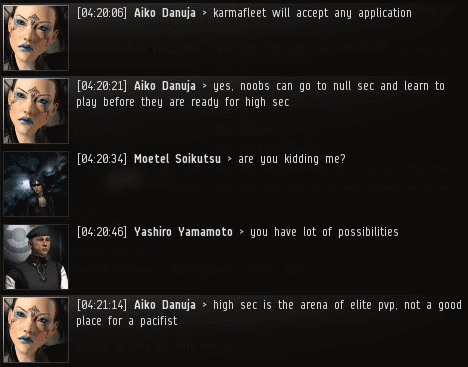 These days, a lot of people who don't live in nullsec claim that nullsec is safer than highsec. Surely, then, new players should go to null.


Moetel Soikutsu > Ohhh, suicide gank is elite pvp? Good to know...
Moetel Soikutsu > Seriously, your way of applying the code is wrong at the core.
Yashiro Yamamoto > if you are disagree with the code you can come inside and change the rules :)
Moetel Soikutsu > No, I don't want to be assimilated as a code member. No honour in it. Just lies as far as I have seen.

Moetel got herself twisted into knots--a common fate for miners who try to debate the Code. 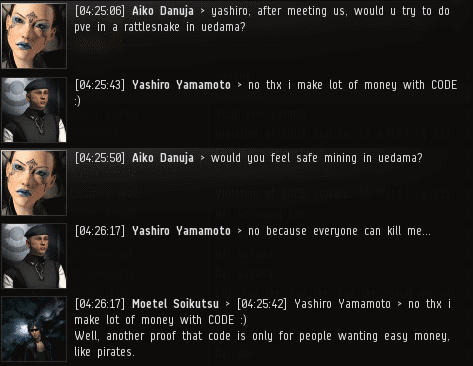 Our Agents teach the lessons that a carebear CEO wouldn't dare. In fact, carebears only teach each other how to lose more and more expensive ships. 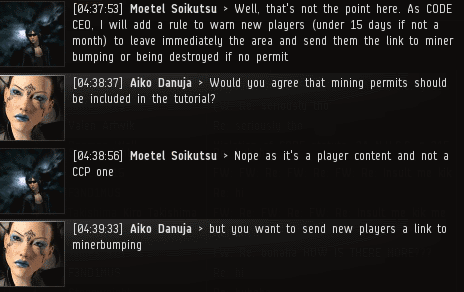 Moetel returned to her list of ideas on how to "improve" the Code. Two steps in, she tripped herself up again. 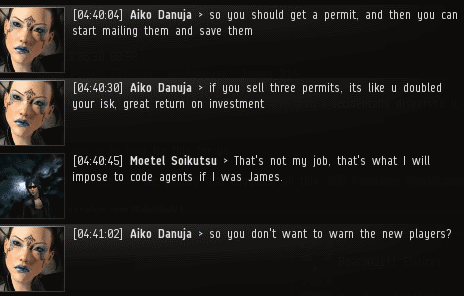 The truth is, anti-Code miners are full of contradictions. They want all the miners to be warned about the Code, but they also want to minimize the publicity that the Code gets. 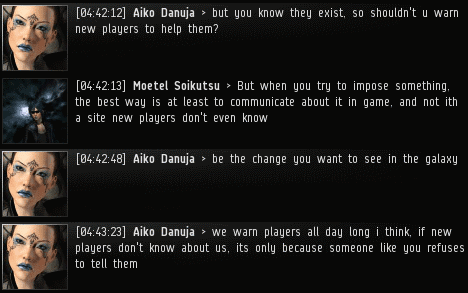 In theory, the rebels should be telling everyone about the New Order. But they can't quite abandon the notion that if everyone ignored the Code, it would disappear. 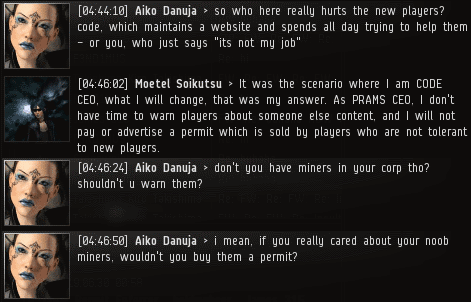 Moetel excused herself from her obligations. She was too busy running a mining corp to spend any time helping miners.

For the anti-Code rebel, having a conversation with an Agent of the New Order can be a dangerous thing. The rebel learns that he is his own worst enemy.

Agent Aiko offered Moetel the chance to do something really useful for her miners. Alas, Moetel couldn't consider parting with any isk for anyone or anything. 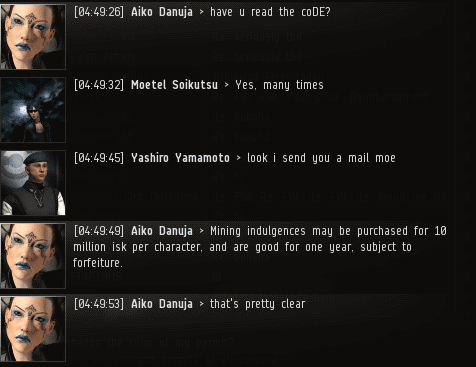