Previously, on MinerBumping... Agents Zaenis Desef and Aiko Danuja to the rescue! Yashiro Yamamoto had his first conversation with good EVE players when our Agents dropped by to teach him about Code compliance. Yashiro eventually purchased a mining permit. But there was still a danger, one that stalked Yashiro like a wolf: The danger that Yashiro only cared about getting his Hulk reimbursed.

The moment of truth would soon arrive.

The miner expressed undue anxiety about the outcome of his reimbursement application. If only he showed such concern about the plight of the unlicensed miners.

Yashiro took a few tentative steps toward compliance when he offered up a "gg" to his superiors. Would the positive change last? 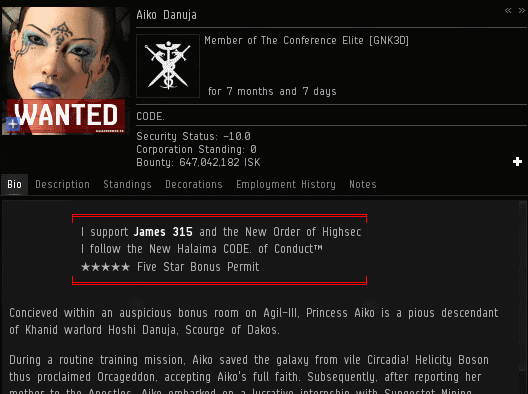 The next day, Agent Aiko reviewed Yashiro's reimbursement request. She liked Aiko, and she yearned to give him some isk. Yet she was an Agent of the New Order, and she could show no partiality to her new friend. Her decision would be made on the facts and on the Code.

Alas, she had no choice but to reject the application. With a heavy heart.

Some rebels and skeptics scoff at our Agents. "Of course she refused to reimburse him," they would say. "Your Agents never give miners any money." However, Aiko's rejection letter was filled with solid reasoning and damning evidence. The outcome was undeniably the right one. Even a harebrained Anti-Ganker (are there still any Anti-Gankers out there?) would have to agree. 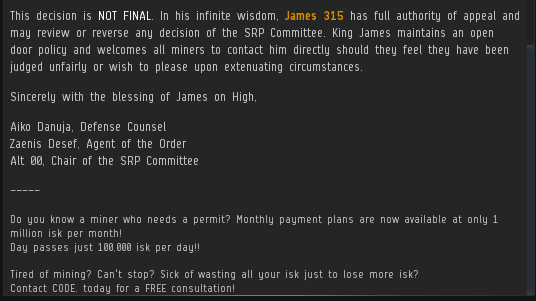 Everything had been done strictly by the book. Now Yashiro's heart would be put to the test. Was he still willing to obey the Code, even if he didn't get his Hulk reimbursed? Upon receiving the EVEmail, Yashiro immediately requested a convo with Aiko. 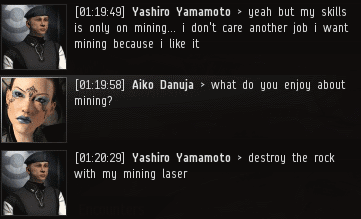 Yashiro was disappointed; he was unsure of how he could continue in his current profession. Our Agent urged the miner to change careers and kill miners instead. 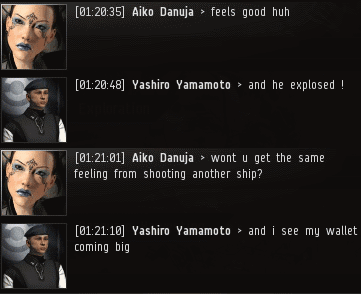 Yashiro wasn't interested in ganking. He simply desired to go back to mining. However, that wasn't what Aiko wanted for him. And it is the responsibility of our Agents to lead the people of highsec.

Yashiro couldn't imagine spending his days shooting at other EVE players. So our Agent had to help him imagine it.

Eventually, Aiko prevailed. The miner reluctantly agreed to give ganking a shot--so to speak.

Over the next few hours, Yashiro's personal killboard began to fill with miner kills and Catalyst lossmails. 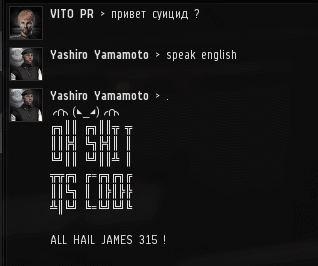 Consuming the blood and tears of highsec miners has a rejuvenating effect; there's hardly an ill it can't cure. Yashiro was transformed. 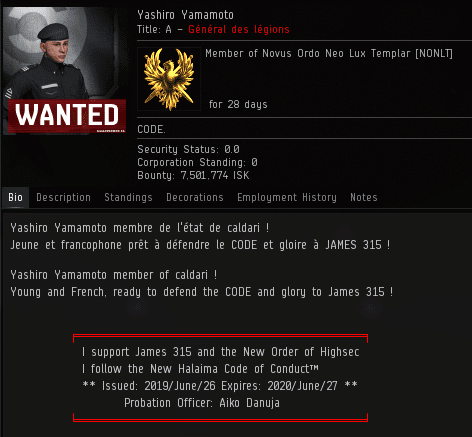 Inevitably, Yashiro joined the mighty CODE. alliance. For the joy of the Code is far more valuable than any amount of isk.
Posted by MinerBumping at 18:05