The New Order is the only organization in EVE that can create a civilization out of the mess that is highsec. Civilization--and civility.

Foul-mouthed miner Herp n'Derp made a Goofus of himself in local and was the recipient of a speedy serving of karma. But now he hated the mighty CODE. alliance. 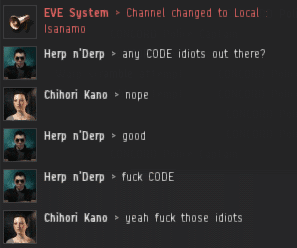 The next day, Herp attempted to spread his hate... 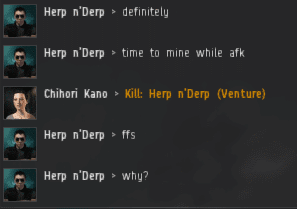 ...But he received a second helping of karma instead.

You've heard the saying, "Never judge a book by its cover." Does this apply to EVEmails sent by highsec miners?

...No. Judge away. The sooner the better, actually.

Two lessons about highsec miners. Number one: they lie. 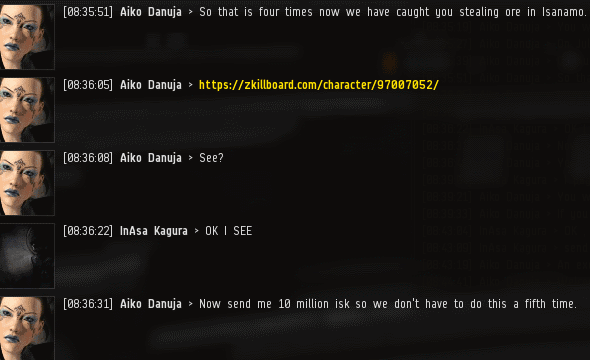 Sargut Kowalski wasted his time and money by coming up with an original--if crude--way to express his refusal to buy a permit. Miners, it's much easier and more affordable to quietly buy a permit at the price of 10 million isk.

These days, it's almost a relief when you gank someone and they do something other than give you a speech about how they're a new player and you're ruining the game.

Is EVE getting a huge influx of new players? Not at all. Just an influx of old players calling themselves "new" for some reason.

It may not be great for PCU, but on the plus side, even someone who plays for a few minutes before rage-quitting counts as an "active user".
Posted by MinerBumping at 18:01