When you fly through highsec, you're likely to find corporations with descriptions like this:

As you can see, members of FlyingBadgers corp are laid back. They enjoy PvE, but they're open to participating in PvP when the opportunity presents itself.

...And no one presents more opportunities than an Agent of the New Order of Highsec. 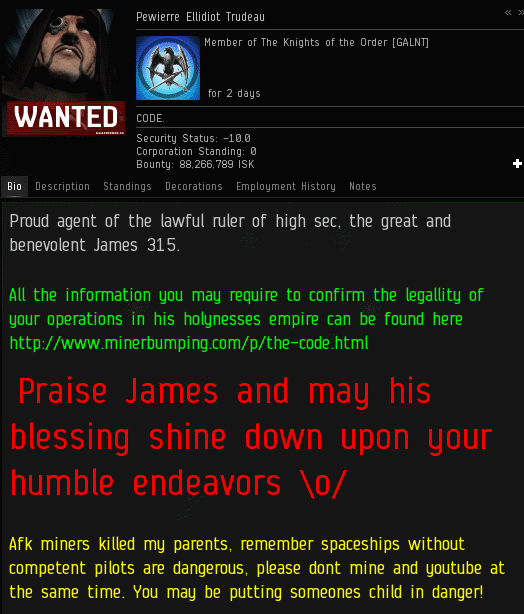 Agent Pewierre Ellidiot Trudeau encountered a member of FlyingBadgers corp. Our Agent was eager to engage in some friendly PvP. But would the FlyingBadgers member live up to his corp's description?

Though they'd somehow gotten off on the wrong foot, Agent Pewierre was confident that he could win over the carebear. First he would need to penetrate Commander Gensis Throne's shield of salt.

The two EVE players reached a crossroads when Pewierre name-dropped the Saviour of Highsec. From this point forward, things could either go really well--or not.

Our Agent took careful note of the miner's reaction. Pewierre put him down as a "suspected Goblok".

The miner had already been angry, but there was something about the "roleplay" of the Code that got under his skin. Commander Genesis Throne wanted absolutely no part of it.

Some might say this miner was mindless, but actually he was of two minds--neither of them good. On the one hand, he didn't care about our Agent or the mighty CODE. alliance. On the other hand, he vowed to hunt down and kill everyone in CODE.

As time went on, Commander Genesis Throne became increasingly fixated on his own bizarre notions of what life in the New Order is like. Kinda makes you wonder about those FlyingBadgers.

The miner simply couldn't shake the terrible feeling that someone had imposed "roleplay" upon him against his will. It disturbed him greatly. But why?

In fact, it's not uncommon for EVE players to be offended by the existence of what they perceive as RP in this MMORPG. They feel it is beneath them; they take their internet spaceships too seriously to engage in such childlike behavior. It's undignified and immature.

...The only solution was for Commander Genesis Throne to tattle on the ganker for engaging in harassment.

The time had come for the miner to report Agent Pewierre to CCP. As we all know, it's against the EULA to shoot a spaceship without the pilot's permission.

The miner temporarily put aside his plans to hunt down and kill all of the gankers. After all, if the gankers were going to be banned anyway, what was the point? As for Pewierre, he decided to move on and see if anyone else in the neighborhood was more receptive to purchasing a permit.

We have one loose end to tie up, though. What was the ship that Commander Genesis Throne lost? 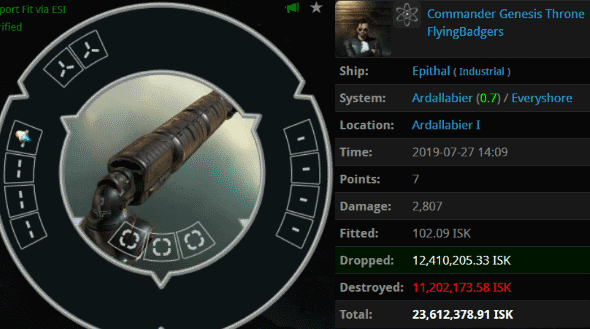