Previously, on MinerBumping... When highsec mining corp xxXSalvationXxx spammed everyone in sight with recruitment EVEmails, other industrialists grew annoyed and threatened to report them to the mighty CODE. alliance.

News of trouble in the Esteban system reached the ears of Agent Koizumi Taira of 44th Recon Unit. She decided to check up on the reports by performing a bumping patrol in the system.

Koizumi confirmed that there was indeed a nest of bot-aspirants in Esteban. It took the miners quite some time to respond in any way to being bumped out of range. They were obviously accustomed to being AFK.

Our Agent provided the warning that most miners complain they never get. But instead of buying a permit--as post-gank miners always claim they would've--the miners remained defiant.

Red Cerex spoke for the rebellious miners. Apparently he was their leader. 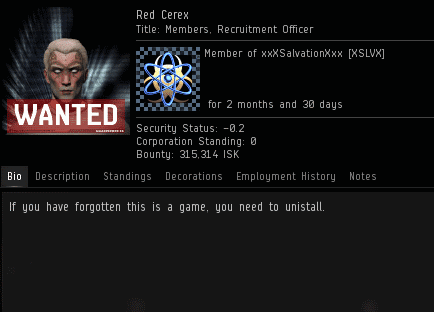 Red Cerex was a recruitment officer for xxXSalvationXxx. He encouraged his fellow miners to resist the Code, claiming that he could drive CODE. from Esteban and keep the system safe for AFK mining.

The rebel leader accidentally condemned himself and the rest of highsec minerdom by admitting that everyone in highsec--even brand-new players--are aware of the Code. Oops!

Agent Koizumi was surprised by the intensity of Red Cerex's anger. Had he been bumped before--or was xxXSalvationXxx simply that much of a negative influence?

Judging from what little Koizumi had seen from the corp thus far, xxXSalvationXxx was as bad as the rumors suggested.

Another miner awoke from her slumber: Kasakabe Anzomi, who would later attempt to use space lawyering against Agent Minx Mattel in the Phantom Menace series.

Our Agent tested the miners by reporting what she'd heard: xxXSalvationXxx taxes and exploits new players. Would this charge touch a nerve with "recruitment officer" Red Cerex?

The rebel leader grew more agitated. Something was definitely amiss.

The bumps were taking their toll. Budding space lawyer Kasakabe gave up mining for the day.

Agent Koizumi's bumping patrol had yielded valuable information about xxXSalvationXxx. Yet there was still the possibility that Red Cerex was a rogue element; maybe the bot-aspirants Koizumi had seen were merely an aberration. Further investigation was needed.