Previously, on MinerBumping... Highsec carebear corp xxXSalvationXxx came under investigation after it broadcast evidence of its bot-aspirant ambitions far and wide. Before long, Agent Koizumi Taira was on the case. Her bump patrol in the Esteban system confirmed that there were indeed AFK miners operating out of xxXSalvationXxx.

Agent Koizumi engaged some of the miners in conversation. Future space lawyer Kasakabe Anzomi tried to justify her illegitimate playstyle by unironically invoking the "if I mine minerals they're free" fallacy.

xxXSalvationXxx "recruitment officer" Red Cerex had promised to drive the Code out of Esteban. Thus far, he was only able to deploy F-bombs. They were ineffective.

Our Agent again reminded the miners that they were being exploited. Would they see reason this time?

The carebears dug in their heels, as carebears are wont to do. But if they wouldn't listen to Koizumi, perhaps they would heed the next Code enforcer who came their way? 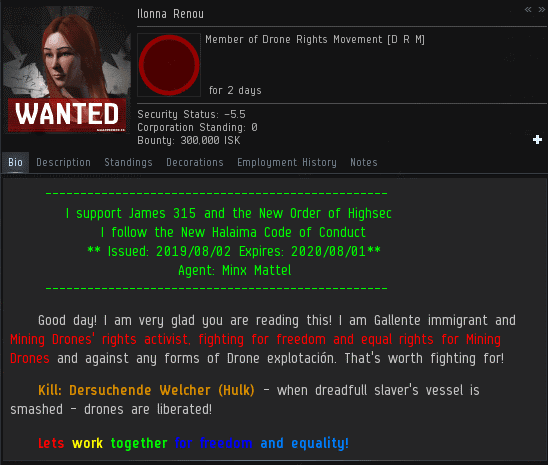 Not long afterward, Agent Ilonna Renou found her way into the Esteban system and encountered the nest of xxXSalvationXxx carebears. Like her predecessors, she came to the conclusion that the corp was a scam. Since Ilonna cared about the fate of the newbros, she frankly informed everyone of her feelings.

This provoked a member of xxXSalvationXxx to send a corp-wide EVEmail.

The sender of the EVEmail was someone named RebelKiwi. Whoever she was, she didn't use paragraphs. Or sentences.

In fact, RebelKiwi was the CEO of the corporation, which by this point had grown to 483 members. One might look at RebelKiwi's messages and be surprised that so many people would follow her. But one should never underestimate how miserable things can get in a highsec "industrial" corp.

Printed below is the entire text of RebelKiwi's anti-Code morale message, which she sent to her hundreds of corp members. It is also a confession of her guilt: 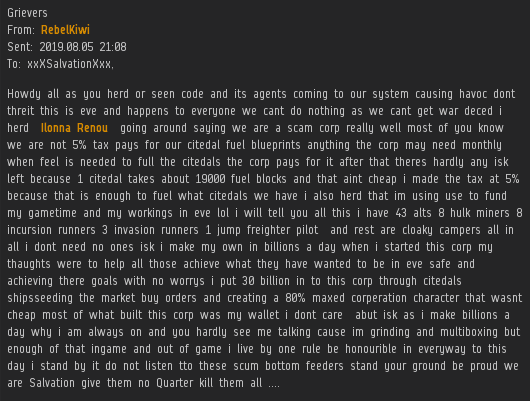 RebelKiwi claimed that her corp was not a scam. She had no need of anyone else's money, as she made billions of isk per day. And while she pointed out that her terrible corp was exempt from the wardec system, she also encouraged her corp members to kill everyone in the mighty CODE. alliance.

In case you couldn't make it through her entire filthy wall of text, this is the explanation for how RebelKiwi makes "billions per day": An armada of alts, including 23 highly lucrative cloaky campers. 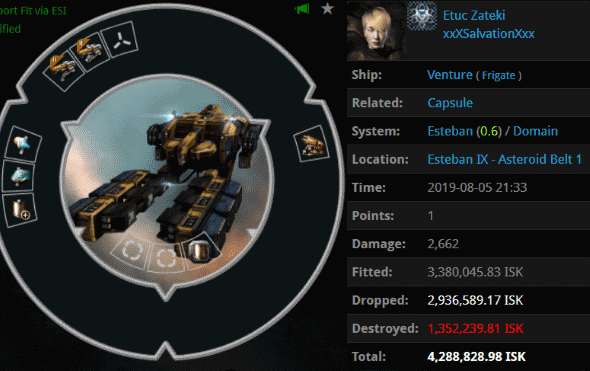 Agent Ilonna Renou responded to RebelKiwi's propaganda barrage by ganking an xxXSalvationXxx Venture. Maybe that would bring RebelKiwi to the bargaining table.

No one ever said diplomacy was easy.