Previously, on MinerBumping... William Rageclaw and Agent Alt 00 went head to head in a battle for the soul of the Nakugard system. The epic struggle culminated in the destruction of William's Kikimora, apparently paving the way to a bright future for all. 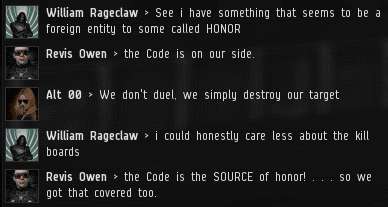 Despite the loss of his prized ship, William wasn't ready to call it quits just yet. For some reason, he remained unconvinced of the Code's goodness and/or truth. 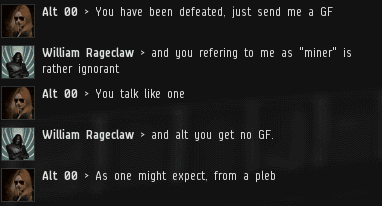 Alt 00 was stunned by the lack of chivalry. She had earned a great victory; it was a time for celebrating, not petty quarreling. But William took his leave without offering a "gf". 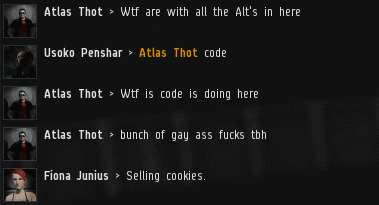 As the threat of William's Rebellion passed from the system, life began to return to normal in Nakugard. 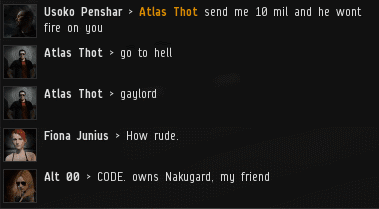 Now the New Order would rebuild. And teach. And grow. 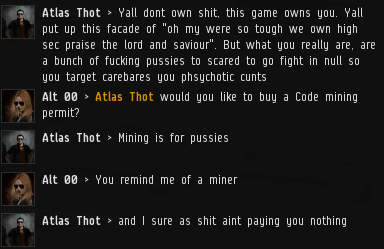 To be sure, other miners would rebel. Unless they were willing to bring a Kikimora into the field, though, they posed less of a threat than William had. Our Agent was more confident than ever. 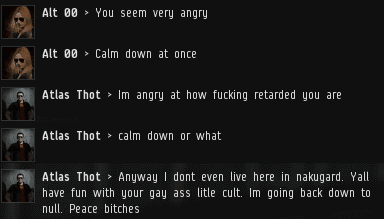 In most situations, Agent Alt 00 was able to defeat potential resistance leaders with a few words of wisdom. And there was another advantage to the post-William era of Nakugard:

Alt 00 had the Kikimora killmail to link as evidence of the Code's power. This sword could be unsheathed whenever our Agent felt the need.

And so it was that William's Rebellion passed into the pages of history. The matter was laid to rest. 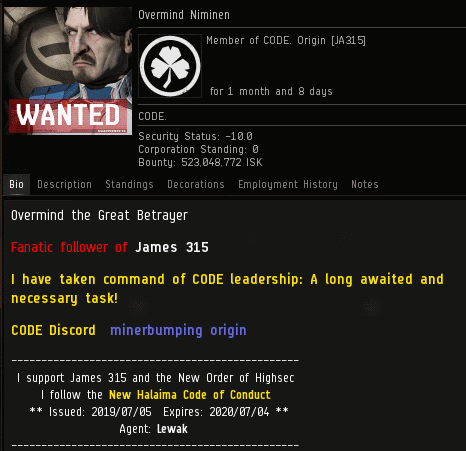 Overmind Niminen, sometimes referred to as a "Schrödinger's Agent", has a convoluted history. His motives are often questioned--frequently by himself. Regardless of his intentions, the fact is that Overmind came into contact with William and informed him of the "William's Rage" series, which was being posted on MinerBumping.

This, in turn, eventually led to a lively comments section on many of our fair blog's posts.

William turned down Overmind's offer to sell him a mining permit. Instead, the anti-Code rebel would revisit his old enemies and renew the conflict with a new strategy.

A storm of controversy was brewing. And what happened next would take the highsec community by complete surprise.