Silent Company is a highsec carebear alliance with over 9,000 members. Why do so many join Silent Company? For the perks--like getting these kinds of EVEmails:

Sabus Narian considers himself an expert in EVE. And one of his fondest dreams is to help other players mine AFK in highsec.

Judging by the number of bot-aspirants dying in highsec these days, Sabus' informative EVEmails haven't quite done the trick. But he is an ambitious carebear. 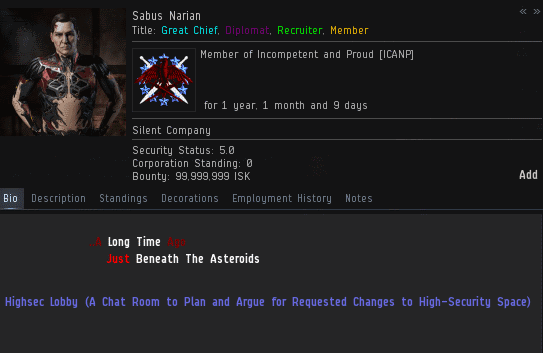 Most recently, Sabus found himself at the center of controversy when he founded the "Highsec Lobby".

Most carebears lobby CCP to nerf highsec risk. This makes sense, because they desire absolute safety for their AFK isk grinding. Sabus, too, wants to skew the risk-to-reward ratio in highsec. But he's not satisfied merely by making highsec safer...

...He also wants to skew highsec risk/reward by making the rewards greater. (That's the gist of all that wallet warrior gobbledygook seen above.)

Of course, one whiny carebear rarely moves CCP. To do the job properly, many whiny carebears are required. That's where the 9,000-member carebear alliance comes in.

In order to mobilize this silent army of AFK miners, Sabus created the Highsec Lobby. 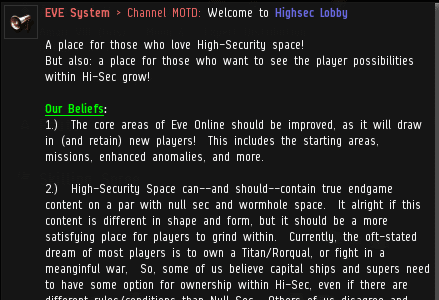 Sabus genuinely believes that highsec income should be equal to nullsec income. His grand vision is for highsec to be filled with Nyx ratting bots--all operating under a CONCORD umbrella. 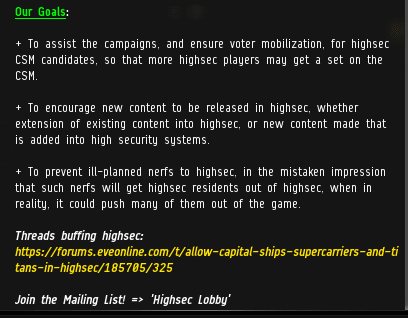 Needless to say, Sabus' dream is inconsistent with the Code. But how would the mass of highsec receive Sabus' message?

The Highsec Lobby announcement was jeered in posts like this one.

Knowledgeminer suggested that if Sabus' petition for greater highsec rewards was to be granted, highsec must first achieve a higher risk level to balance it out. And the first targets should be members of Sabus' own alliance, Silent Company.

That sounds like the logic of a ganker--of an Agent of the New Order, even. Is this Knowledgeminer fellow a member of the mighty CODE. alliance? 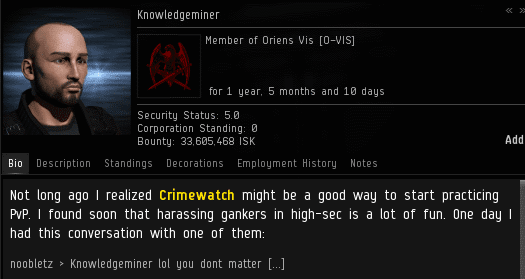 In fact, veteran MinerBumping readers may recognize Knowledgeminer as one of the most notorious Anti-Gankers. Yet even he was disgusted by Sabus and the Highsec Lobby. But what would the rest of the Anti-Gankers think?