Previously, on MinerBumping... All was well in the world of aiva naali until he encountered Ulukamuk Shimaya. The shadowy figure offered to tell aiva dark secrets--for a price.

Ulukamuk wanted half a billion isk. It was an expensive ask from a stranger, but aiva was too darned curious to pass it up.

The mysterious informant was operating with a "burner" character: Ulukamuk was newly created and would be biomassed shortly after the conversation ended.

aiva couldn't wait any longer. He handed over some assets and awaited his prize.

The informant found himself struggling to get his point across.

aiva didn't rattle easily. Finally, Ulukamuk produced a link to the MinerBumping series about aiva, which by that point was already on Part 19.

aiva went silent when Ulukamuk--apparently the alt of a scam victim--dropped the bombshell about the MinerBumping series. Ulukamuk claimed that aiva wasn't really involved with the Imperium at any level. Then who the heck was saluting his dolphin flag?

Now, it seemed, aiva had become convinced of his council's betrayal. His mind was focused on only one thing: Revenge.

aiva intended to plot a way to destroy those who had betrayed him. However, as we saw, after the convo ended, aiva contacted his council and confronted them with the evidence.

We now return to that conversation, already in progress. aiva was playing a double game. No, a triple game: He presented one face to Ulukamuk, another to Agent Aiko Danuja and the council--and he planned to show yet another face to the readers of MinerBumping. But what was he really thinking? No one could say what was going on inside aiva's head. 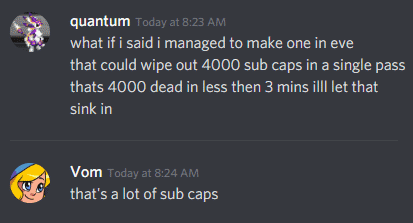 As aiva navigated the increasingly complicated waters of espionage and spycraft, he continued to work on designs for his superweapon projects. But despite his unflappable exterior, aiva's future with the Imperium was more uncertain than ever.