The Genesis of Compliance, Part 8

Previously, on MinerBumping... William Rageclaw was just seconds away from finding out who had muted him in the MinerBumping channel. At the last moment, William made a series of mistakes that resulted in Agent Alt 00 being forced to place her intel-sharing plan on hold. William retaliated by muting our Agent in his own in-game channel. But then a new hope appeared.

Agent Alt 0--Alt 00's older sister--suddenly entered the channel. Could she save the day?

Alt 0 claimed to have information sourced directly from Alt 00. If so, she could explain why William's Orca had been teleported to nullsec and destroyed.

The Agent had in her hand a link to an API-verified killmail from the zKillboard database. What secrets did it hold? 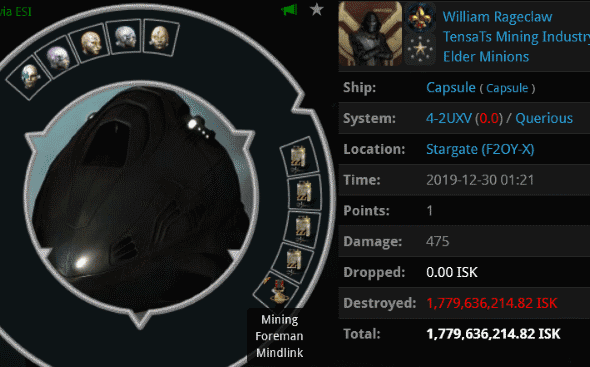 The killmail in question recorded the contents of William's pod, which had been popped shortly after the destruction of his Orca. The pod contained a Mining Foreman Mindlink.

The evidence was clear. Now William found himself in an impossible position. Should he challenge the validity of the killmail--or come up with some excuse for why he'd plugged in an illegal implant?

William staggered, set back on his heels. Alt 0 courageously pursued the truth like an avenging angel.

William took a moment to regain his composure. He realized that relying on Alt 0 had been a mistake. If she was allowed to continue in her crusade, she would destroy him!

The battle was lost. William's only hope was to turn back the clock.

Even the fence-sitting Overmind Niminen found himself convinced of William's guilt. The former Orca pilot's position had completely imploded.

William stubbornly clung to his pre-Orca "accord" with the mighty CODE. alliance. He viewed the "accord" as his only lifeline.

In the aftermath of the revelations about William's secret implant, though, it was a whole new world--for William, a much darker one.

In a last-ditch effort, William urged Overmind to support the "accord" and restore his status as a Code-compliant miner. But was it too late?