He Took the Bait 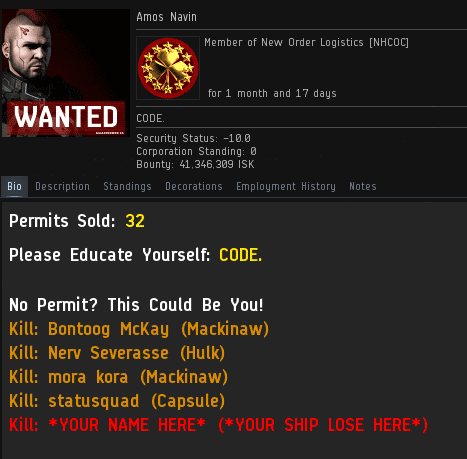 Meet Agent Amos Navin. He is a relatively new member of the mighty CODE. alliance. An idealist, he is deeply committed to the principles of the Code. 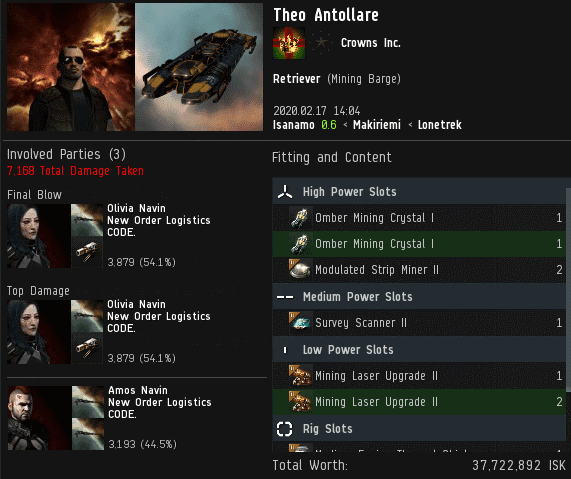 Agent Amos came across an unlicensed Retriever AFK mining in highsec. As a Code enforcer, he didn't hesitate to gank it. Why would he do otherwise?

The Retriever pilot, Theo Antollare, eventually returned to his keyboard. Amos began to provide the miner with vital information about the Code. Amos had already done this sort of thing many times before, and he expected there was a reasonable chance that he'd be able to sell Theo a permit.

...But Theo Antollare was no ordinary Retriever pilot. Our Agent was about to get more than he'd bargained for.

Theo's threat level rose exponentially: He had a PvP ship, a desire for revenge--and some allies willing to help him get it.

Despite mining in highsec with a Retriever, Theo had been playing EVE since 2014. He didn't take kindly to being ganked by someone much newer to the game.

Theo was further enraged by the Agent's attitude. It was clear that Amos wasn't the least bit intimidated by Theo's threats. It was like Amos just didn't get it about the PvP ship and friends coming to get him.

The miner (caveminer?) sought to make it clear how serious the situation was. The next six months were going to be brutally difficult for Agent Amos. Pure hell, in fact.

...So why wasn't Amos afraid? Was it because he had the Code on his side?

A massive revenge fleet was forming up. People were rallying to the cause of Theo's slain Retriever at an alarming rate.

Just when it seemed as though the walls were closing in on Agent Amos... Nothing happened. For some reason, the revenge fleet(s) failed to materialize, as did Theo's PvP ship. It was a miracle. How did Amos win against such incredible odds? Actually, the answer is simple:

The CODE always wins. Always!
Posted by MinerBumping at 18:05