Previously, on MinerBumping... aiva naali's plans to have the Imperium conquer Pandemic Horde and/or Test Alliance Please Ignore were repeatedly foiled by the Imperium's Corps Diplomatique. aiva was left with no choice but to regroup and re-fund his supercapital flagship(s).

As he waited for his flagship to be completed, aiva passed the time by planning how to restructure the Imperium's economy.

As a general rule, aiva wasn't interested in small ideas; he preferred grand designs. He intended to completely remake the map of nullsec.

Of course, aiva couldn't fundamentally transform nullsec all on his own; he needed a couple of guys in a Discord channel to help him.

aiva's hard work wasn't wasted: His ideas were thoroughly examined and debated at the highest levels of the Imperium.

aiva understood that modern nullsec revolved around the humble renters. Managing them properly was the key to a good economy and strong security.

To be sure, it would cause no small disruption to reshuffle all of the renter alliances in accordance with aiva's design. But the end result would be worth it--aiva did the math.

While the Imperium's economy was being restructured, aiva went to work analyzing the Imperium's most dangerous enemies. He had recently deduced Pandemic Horde's secret plans.

Pandemic Horde had a guerilla-like approach: After aiva's fleets took all of their space, Pandemic Horde would create alts and resettle in Imperium territory. But aiva would root them out.

It suddenly dawned on aiva that some of the enemies previously conquered by the Imperium might actually be using Pandemic Horde's roach strategy even now. 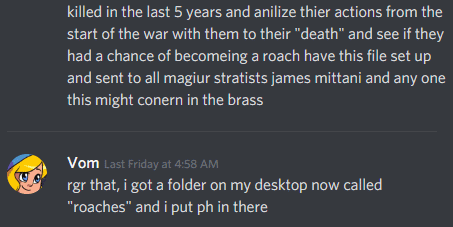 Agent Aiko Danuja was appointed chief of the roach patrol.

With most of the Imperium's foreign and domestic issues worked out, aiva turned his attention back to his long-awaited Nyx. By his calculations, it was fully paid and ready for delivery. 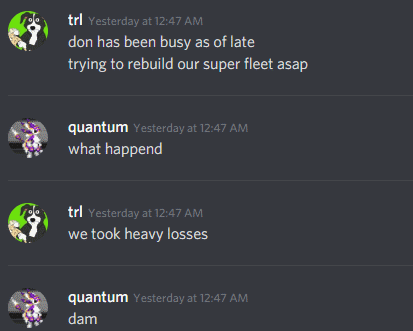 But there was a problem.