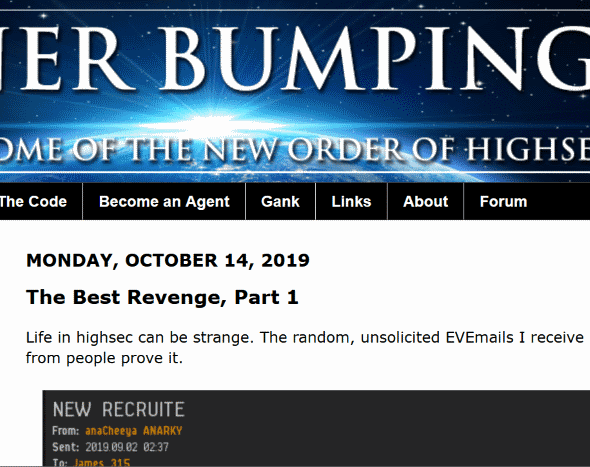 For months, the misadventures of aiva naali had been documented on MinerBumping, EVE's finest news source. During that time, aiva had invested over 20 billion isk into a supercapital project--all the while running the Imperium. Or so it appeared.

Then, suddenly, aiva discovered the MinerBumping series, which was already on Part 19.

aiva didn't like surprises. He confronted his council with what he'd learned. Since their communications had been posted on MinerBumping, at least one of them must've been a leaker.

With this breach of trust, the future of the council was in serious doubt. Everything from the past few months had to be questioned.

aiva now knew that the Saviour of Highsec had eyes and ears everywhere. Which, admittedly, is something I have been telling people from the beginning. Total transparency. 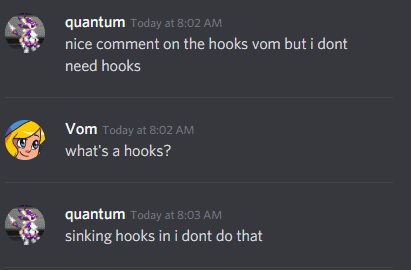 Perhaps aiva's closest associate in the council was Agent Aiko Danuja. aiva knew that Aiko was also an Agent of the New Order--and therefore directly linked to the Saviour of Highsec. Could aiva even trust her anymore? 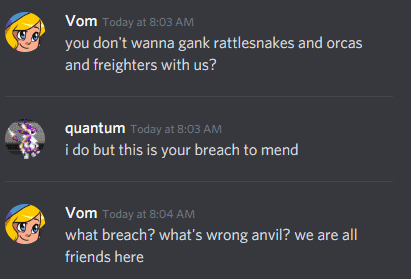 Despite the overwhelming weight of the evidence, Aiko insisted that all was well. There was no reason why anything had to change.

From aiva's point of view, though, things had changed. He could no longer speak freely about his secret weapons projects. Months of classified work had been posted on MinerBumping!

aiva and her council struggled mightily with the problem of how to move forward. But in the background lurked another important question: How did aiva come across the MinerBumping posts in the first place?

Earlier that day, aiva had been contacted out of the blue by a mysterious individual named Ulukamuk Shimaya. Within moments, aiva sensed that this was going to be a conversation of the cloak-and-dagger variety.

aiva was intrigued. He knew that intel was the most valuable commodity in EVE--and it wasn't for sale in Jita 4-4. The secrets of nullsec were bargained for in dimly-lit parking garages and private convos like this one.

The intel being offered wouldn't come cheaply. And for good reason: It would change aiva's life forever.