The Genesis of Compliance, Part 9

Previously, on MinerBumping... William Rageclaw demanded that Agent Alt 00 honour an "accord" that William supposedly made between himself and the New Order. But Alt 00's older sister Agent Alt 0 unearthed a scandalous secret: William had been caught using an illegal implant! 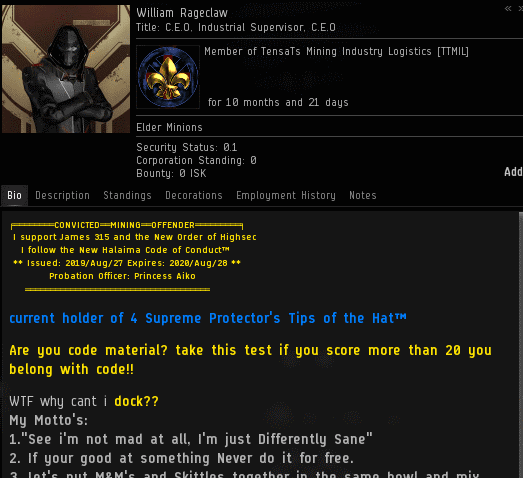 Despite his best efforts--and despite having control of his own in-game channel--William's attempt to negotiate an "accord" fizzled out. He found himself left in limbo. But the New Order's quest to save highsec could not be put on hold.

Our Agents had many other people to help. While William considered his next move, the "Why Was I Ganked?" channel hosted another recent client of the New Order. 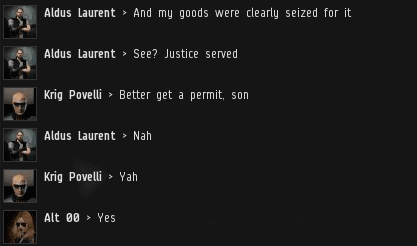 With virtually no prompting, highsec "industrialist" Aldus Laurent confessed to being AFK in highsec. He even admitted that he was justly ganked. Although he conceded the facts, he wouldn't accept the obvious conclusion--he needed a permit.

Aldus was confident that he could disobey the Code and escape judgment. Over 80 trillion isk on the mighty CODE. alliance's killboard suggested otherwise.

There was no doubting that Aldus had been bested by our Agents. For whatever reason, though, he had faith in his ability to become a more elusive Code violator.

Our Agents knew that Aldus' attitude would only get him ganked again. They were not satisfied with that outcome. Aldus could do better.

Tipping a ganker is considered good manners. It's something that carebears don't do often enough. In fact, highsec miners are known for being ill mannered. No wonder people don't like them!

Aldus intended to disobey the Code again in the future, but he had to admit that our Agents deserved some money for the service they provided to highsec.

Twenty million isk was a good start, but it was less than Agent Aiko Danuja had asked for. Alt 00 encouraged the miner to start off 2020 on a good note. After all, 100 million wouldn't exactly break the bank. 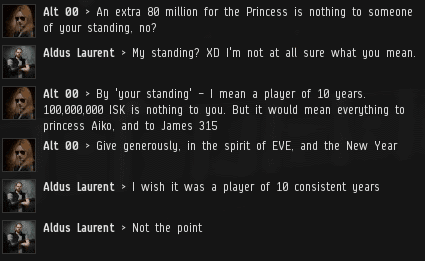 Alt 00 put Aldus on the spot. Now the miner was feeling the heat. If he didn't open his wallet again, would everyone think he was cheap? 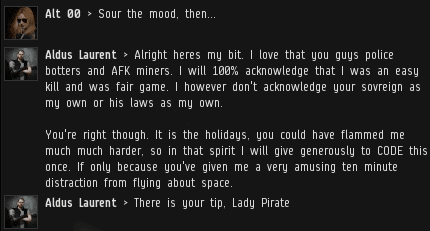 Aldus once again confessed the Code's justice and gave some isk to Agent Aiko.

But the controversy was only just beginning.