We Expect You to Do Better, Part 2

Previously, on MinerBumping... An egregiously AFK Deen Ume was podded by Agent Katy Melons. Deen should've counted himself lucky and purchased a mining permit. Instead, he cried about the unfairness of the Code. 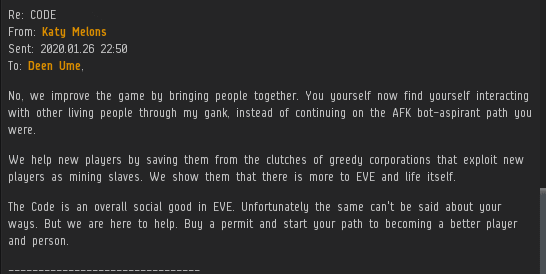 Many non-compliant miners think themselves morally superior because they're less skilled at a video game. In fact, our Agents are the good guys--a fact which greatly disturbs the carebears.

In reply to Agent Katy's well-reasoned arguments, Deen could only grumble and grouse. Deen's "tell" was prefacing his mindless comments with the word "wow".

Deen dismissed the notion that he was part of the problem in EVE. Yet the idea nagged at him.

Mining permits are not in-game items that can be purchased from the Jita market, but that doesn't diminish their impact on the game. Much of EVE can be similarly described: As far as the game mechanics are concerned, the Imperium, for example, does not exist.

The miner didn't consider pod kills to be real, either. Apparently they were worth crying about, though.

Deen continued to argue. He didn't see the wisdom in purchasing a permit. And he kinda sorta admitted to the crime of bot-aspirancy.

With each new exchange, Deen found himself boxed further into a corner. He had no excuses and nowhere to hide.

In a triumphant moment, our Agent let loose with a ringing endorsement of the Code and all good things in EVE. What sort of miner could read her words and not feel compelled to hand over 10 million isk?

In a desperate moment, Deen threw out the old "I'm a newbie and exempt from being ganked" trope. He immediately regretted it.

Flailing about, Deen suggested that his words may have been misinterpreted and his character's age may have been misleading. May have. Deen didn't even have the guts to assert his lies as facts.

With that, the miner went silent in a huff. If only he'd been courageous enough to embrace the Code. EVE is no game for Goofuses!
Posted by MinerBumping at 18:02