Meanwhile, Arnisador returned to the ice anomaly in a Deimos. He gave Zazz the carebear stare.

Zazz was focused on his goal of bumping Menja. To his surprise, Arnisador accidentally bumped Menja with his Deimos.


Zazz Razzamatazz > Arnisador thank you for bumping him for me
Arnisador > whats it like to be the slow kid in class zazz?
Arnisador > and this idiot is still bumping
Menja Long > I am making a ticket as we speak as isk spamming is a voliation or it would be an option when bringing up player info

Eventually, Arnisador had to concede that yellowboxing Zazz with a Deimos wasn't very productive. Menja's mining was becoming less productive, too, since she was bumped out of range.


Menja Long > For those of you mining and fell as I do that what is being done at this moment falls within the non-harrestment rule please submit a ticket as I just did. If players allowed to keep doing this type of thing the game will not be playable
Zazz Razzamatazz > Menja Long it's not harrasment. I'm providing a valuable service
Zazz Razzamatazz > for a profit

Menja sounded the call for all rebels in system to join her petition against the New Order. Just like a space lawyer, Menja assumed that hers would be the first anti-Order petition to be granted.


Zazz Razzamatazz > Kill: Arnisador (Mackinaw) :)
Capt Bloodykirk > its like obama taking credit for Osama bin Ladin
Arnisador > ooooooh ... i killed a mackinaw... shit... you guy guys are retarded
Arnisador > shut the fuck up
Kasmire Long > he probilly was flying the Mack with an alt so he could be brave enough to kill it so to try and impress others!
Arnisador > as i said before PW ....fuck off!!!
Zazz Razzamatazz > Arnisador as I said before, buy a permit!

To reinforce his claim to authority, Zazz waved the Arnisador killmail in local. Capt Bloodykirk objected that one Agent shouldn't take credit for another Agent's kills. But from the perspective of the New Order, all such kills are made in the name of the Code. To paraphrase the Reverend Doctor Martin Luther King, Junior, justice anywhere is a help to justice everywhere.


kate Kafshaz > im going to put this as simple for you tards to understand......FUCK YOUR PERMITS
Zazz Razzamatazz > "Without rules, there is no such thing as freedom. By enforcing a system of just laws, I give the miners liberation from their own worst instincts. And through this process, the miners can be molded into better people,
Zazz Razzamatazz > the kind worthy of joining the new community of EVE. I'm no idealist to believe, firmly, in the integrity of the Code and the New Order of Highsec. It's no ideal to me: It is a living, working reality." James 315
kate Kafshaz > rules and laws are meant to be broken
Zazz Razzamatazz > I am off- obey the Code!o/
kate Kafshaz > fuck the code!

Satisfied that justice was done, Zazz took his leave and wished the miners well. But he decided to give a parting gift to Menja Long:

With bounties affixed to Menja's characters, she rebel was put on notice. Would she receive the notice gracefully?

Menja noticed the bounties and sent Zazz a curt EVEmail from her alt, Kasmire Long. The bounties were small, but they were enough to convince Menja that Zazz would ruin EVE for everyone. 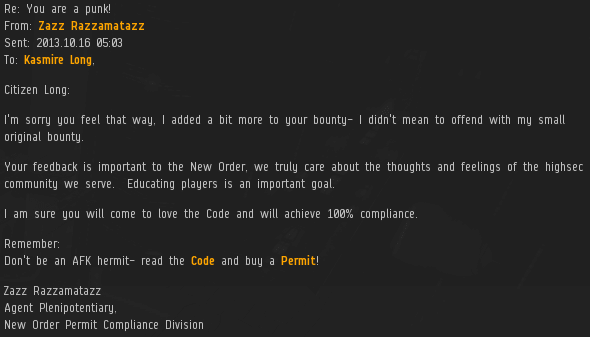 Zazz was too busy helping Menja to be offended by her nonsense. To aid her in remembering to purchase a permit, he concluded his reply with a catchy little jingle: "Don't be an AFK hermit, read the Code and buy a permit!"

Hours later, Menja was still livid and let Zazz know it. But she also let him know about something she didn't intend to. The reference to "pulling down POS's" piqued Zazz's curiosity. 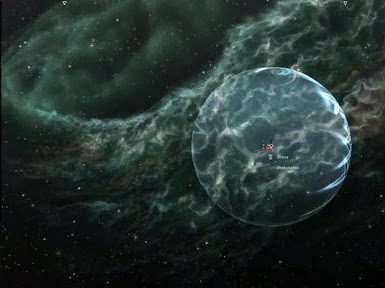 One locator agent later, Zazz set eyes on a tower of bot-aspirancy. When Zazz looked upon it, he knew in his heart what needed to be done.