Previously, on MinerBumping... Former Orca pilot Avacyn Eternal started making a bunch of excuses for not obeying the Code. Agent MotherSammy caught her in numerous lies. MotherSammy won the argument, but could she win the mining permit fees that she was owed? 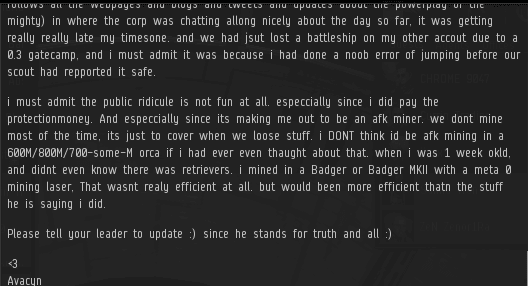 In response to Part 2 of this series, Avacyn sent MotherSammy another EVEmail complaining and justifying her actions. (Or, in the case of her 25-minute hibernation between losing an Orca and convo'ing MotherSammy, her inaction.) 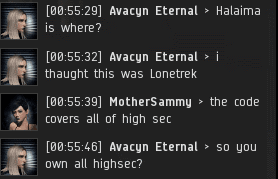 Avacyn began reading the Code. She asked a common newbie question about the reason for "Halaima" being in the title. The New Halaima Code of Conduct, like the Geneva Convention, was named after a place but applies everywhere. 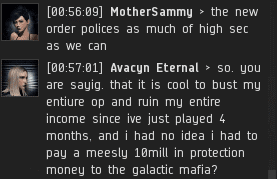 In her earlier EVEmail, Avacyn claimed that she had waited 25 minutes before initiating the convo so she could discuss the matter without being angry. She still seemed bitter, though. 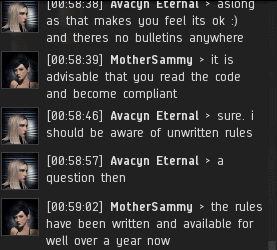 Case in point: Avacyn's complaints about the Code being a set of "unwritten" rules. 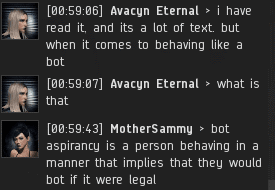 MotherSammy is a professional. Within seconds, she got Avacyn to concede that yes, the Code is a written set of rules. 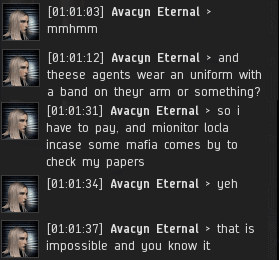 When she finally came to understand the anti-AFK provisions of the Code, Avacyn fumed. She couldn't imagine having to respond to an Agent in local. 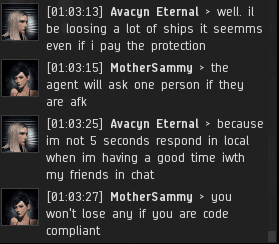 Avacyn tried to justify her concerns by saying she was too busy "having a good time" with friends in a separate chat. Nonsense. If you put a bunch of Code violators in a chat together, you get an empty chat. A bunch of AFK'ers don't exactly make a lively party. 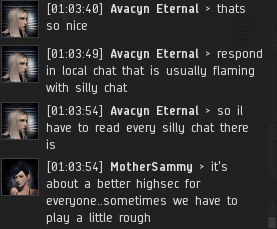 A protip for the sociable miners out there: Conduct all your conversations in local. No corp/alliance/whatever chat windows are necessary for miners. Anything you say to your fellow miners should be fine to say in front of an Agent of the New Order. If you don't feel comfortable saying something in the presence of an Agent, maybe you shouldn't be saying it at all. Or thinking it.

Drama queen that she is, Avacyn declared that the new rules would make her world collapse. Yet she hadn't even tried following the Code yet. Miners, don't knock the Code until you've tried it. And even then, don't knock it. It's the law--have some respect. 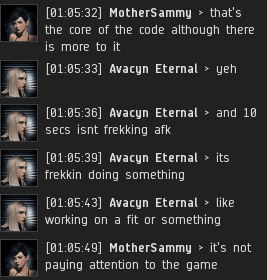 More and more excuses poured out of Avacyn's mouth. As usual, the excuses were without merit. If a miner wants to work on a fit, they can dock up first. If you want to mine, mine. If you must multitask, mine while contributing to local chat, such as by praising me in local. 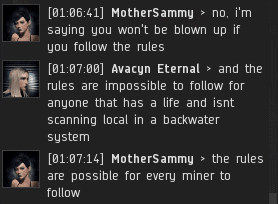 Some miners claim the Code is "impossible" to follow. So how do they explain the thousands of miners who have already gotten into compliance? 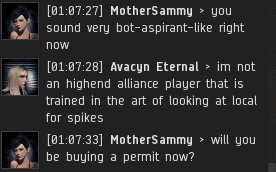 Avacyn moaned and groaned. She wasn't "trained" for this, she said. MotherSammy knew it was time to get Avacyn to grow up and make a decision. The miner would buy a permit, or she would declare herself an enemy of the Order.