Previously, on MinerBumping... The latest in a long line of resistance movements, THE GIMA CONSORTIUM declared themselves the galaxy's only hope against the New Order.

Agent Neobdragon reported the existence of a new rebel alliance. I assumed he was referring to GIMA, but no, it was yet another rebel-aspirant group: Warlords of the Heavens.


Neobdragon > Greetings!
Leutra > Hello
Neobdragon > I would like to learn about your corporation!
Leutra > Alright... Small, rag-tag, pissed off at this whole new order crap. ready to stand up for ourselves and others. We are small - 6 members - but actively growing. We are, not soon to be a member of the USATO aliance which is also working to put up a
Leutra > stand against the new order. That is our recruting effort so far.

Since no one else had an interest in joining them, the corp's CEO had plenty of time to answer questions from Neobdragon.


Neobdragon > Oh cool.
Neobdragon > How do you intend to stand up against them?
Leutra > I have a couple of key positions I am trying to fill: Warlords of the Heavens Seeks Members We are starting with our home system and the plan is, for now, to just work out from there.
Neobdragon > But then what makes this different from any other mining corporation?
Leutra > We have a few aces up our sleeves - the USATO aliance among others - I am also putting a strong emphasis on intelligence gathering in our efforts towards bringing bringing down the new order.

Leutra had hopes of joining the USATO alliance, a group best known for being chased around by solitary New Order Agent Bing Bangboom.


Neobdragon > Oh?
Neobdragon > What kind of intelligence gathering would bring down the New Order?
Neobdragon > I've heard of something similar but as you can see, they still stand.
Leutra > It is no doubt a difficult task, but we have the skills and expertise in the areas required for that. The start will be difficult but like dominos the hope is things will eventually start toppling

Neobdragon pressed for more information on the corp's ambition to gain valuable intelligence about the New Order. So far, rebel organizations have been very lacking in the intelligence department. 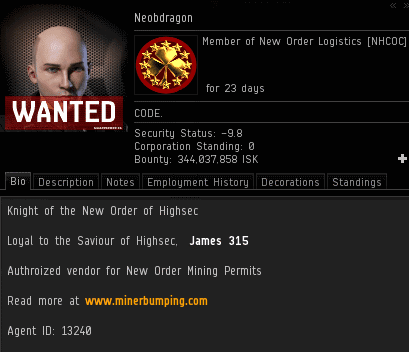 Then Leutra finally bothered to look at Neobdragon's bio. After carefully studying it, Leutra came to a stunning realization: Perhaps Neobdragon wasn't a highsec miner, after all. He accused Neobdragon of being in league with the New Order!


Neobdragon > Just curious as to what measures of protection there are out there. So far none have appeared effective.
Leutra > You may want to mention that to Bing Bangboom who shat himself yesterday as we cased him out of Kobam.
Leutra > Well, you, like your New Order shit - bore me... I really must be going... I must clean my ships windscreen after Bing shat himself yesterday. Hey, maybe I could use some of those permits you guys keep hauking to clean up his little mess. 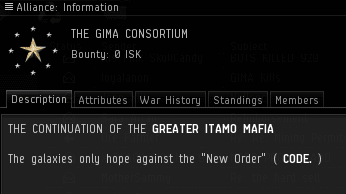 But what of the "GIMA" rebels? A group of New Order Agents infiltrated their channel, hoping to learn more about the organization from Bna'i, the self-proclaimed rebel leader.


Bna'i > you are one of the CODE.
Bna'i > just like a GOON pet too stupid to know his right from left
Agent 057 > I am accepting payments for mining permits.
Agent 057 > get yours or get ganked
Bna'i > you guys are a copy cat off of us
Bna'i > you know that right

The rebel leader was much more diligent about inspecting our heroes' credentials than Leutra had been. He leveled an extraordinary accusation against them: The New Order is nothing more than a rip-off of the anti-New Order alliance!

Bna'i claimed his group had done everything the New Order had done, years ago. Yet his claims aroused suspicion, because no one could find anyone who had ever heard of him. Also, the whole "rebel alliance" gimmick kind of implies that there was some preexisting thing that they were rebelling against in the first place.

Agent Crazy Bill Ovaert attempted to explain to Bna'i the difference between the two groups. But Bna'i was only interested in venting his anger against the Order.


Bna'i > i hope you are getting that bucket to catch your fucking head when i cut it the fuck off
Agent 057 > you mad bro?
TearsForThePoor > mmmm those tears
Bna'i > mad about what
Bna'i > i just come for what you owe me
Bna'i > or your fucking head
Agent 057 > if you need a permit . . .let me know
Bna'i > i dont mine
Bna'i > Im a proffessional GOON and CODE. hunter

Our Agents felt compassion for the poor man. Bna'i went into fits of rage, which were punctuated by his protesting that he wasn't really mad. But he did seem mad.

Out of nowhere, Bna'i called upon any neutrals in the convo to join his side.

Another member of the rebel group, Hikaru Inumakari, condemned the New Order corps for their lack of honour.


Agent 057 > need to get a bigger bucket
Bna'i > like i sd im a professional GOON hunter
Hikaru Inumakari > yep code will soon have to dock up or run from fights in the war comes to them
Balthier Van-Graff > So you can gank a few miners. yay. But can yu fight a straight up war? Not a chance. Fucking noobs
Bna'i > We are the Anti CODE see..... GIMA CODEBREAKERS (-CODE) as the ticker
Bna'i > we are sooo anti you

Apparently abandoning all claims of originality, Bna'i declared that the entire purpose of GIMA's existence was to be the opposite of the New Order. In that much, he succeeded. The New Order has achieved nothing but victories, and GIMA, well... They do the other thing.
Posted by MinerBumping at 19:52