Le Judge Not, Lest Ye Be Le Judged

I don't spend much time reading EVE-O. Probably less time than I ought. However, it occasionally yields useful intel about anti-Order activity brewing among the rebels of highsec. The New Order is known for being proactive, so it shouldn't surprise you to learn that I have a top-of-the-line system in place for detecting potential threats.


"My beef is with the Order, or more specifically the "Code" .. the crap that is being force fed to us and shoveled out to justify unacceptable behavior on a massive scale. CCP are unable or unwilling to respond to it and I'm suggesting someone does."

Take, for example, the quote above. It was written by a disenfranchised young rebel named Le Judge. My system immediately flagged this post and uploaded it automatically into the New Order Threat Matrix. By which I mean I glanced through another carebear complaint thread on EVE-O and thought it was funny. 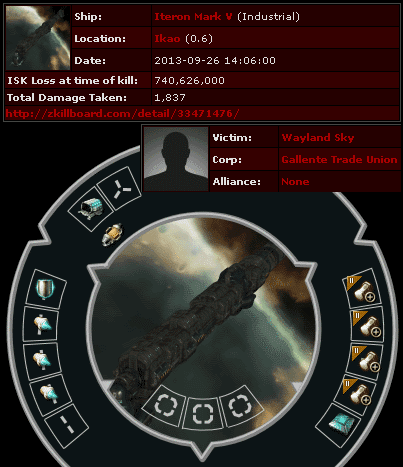 Le Judge's alt, Wayland Sky, was killed by Agent D400. The Wayland alt was schlepping around a PLEX and other items worth 740 million isk in an Iteron V. Let's be honest, this Iteron V fit probably could've been improved upon. But Le Judge didn't think it was necessary to put any additional effort into it, because highsec. Agent D400 would have begged to differ, but Agents of the New Order do not beg. They act. 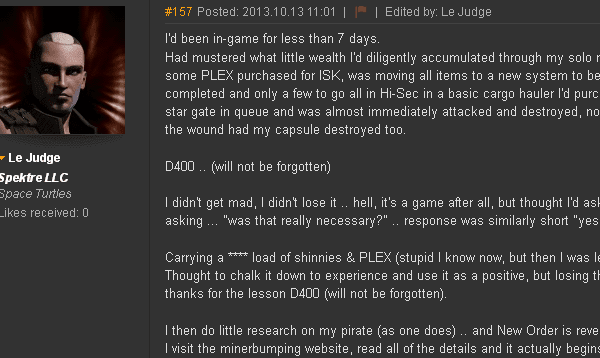 Thank goodness for people like D400. Most people look at an Iteron V autopiloting through highsec and shrug their shoulders. D400 looks at such a ship and sees an opportunity. For some reason, Le Judge thought he was the good guy in this scenario, despite having PLEX in his cargo--PLEX that he admitted he purchased for some quick isk. (Everyone knows how I feel about RMT: I will not have it in my highsec.) And so, Le Judge went to a preexisting complaint thread about the New Order and spilled his guts:


"I'd been in-game for less than 7 days.
Had mustered what little wealth I'd diligently accumulated through my solo mining efforts outside of any Corp and had some PLEX purchased for ISK, was moving all items to a new system to begin life with my new Corp. Over 20 jumps completed and only a few to go all in Hi-Sec in a basic cargo hauler I'd purchased just for the task, had warped to next star gate in queue and was almost immediately attacked and destroyed, not only lost my hauler but then to rub salt into the wound had my capsule destroyed too.

I didn't get mad, I didn't lose it .. hell, it's a game after all, but thought I'd ask the question so I'd sent a one line eve-mail asking ... "was that really necessary?" .. response was similarly short "yes" came the reply.

Carrying a **** load of shinnies & PLEX (stupid I know now, but then I was less that 7 days in).
Thought to chalk it down to experience and use it as a positive, but losing the PLEX somehow felt like "theft" to me but ..
thanks for the lesson D400 (will not be forgotten).

I then do little research on my pirate (as one does) .. and New Order is revealed to me for the 1st time.
I visit the minerbumping website, read all of the details and it actually begins to sounds like wisdom !
Saving us from the Bots .. sounds like a plan.. and one that I'd willingly subscribe to for 10Mil, even be tempted to assist.

HOWEVER .. A shiver crept up my spine and I then I also remembered that it doesn't resemble or explain what happened to me and most likely, a lot of others. I'd received no "bump" to see if I was a BOT, no nice polite message declaring to hand over the 10Mil and/or shown a link to explain WHY.
No .. just like a pirate would, and out of no-where everything I had accumulated was now gone..

Some would say "hey dude it's just a game".. I understand it's a game, but I tend to think that if I had possibly been a younger person, or someone less emotionally mature (say, my younger son) could have potentially caused a Log out, quit game, Gone!
So, how does "Eve" and it's gaming community benefit from this? Does it become a better place? How does the wisdom and this sanctioned activity by the Order hold up to being any way justifiable? .. Quite simply, It doesn't.

The more I'd read the more I was reminded of another who had very successfully hood-winked the masses and declared to be performing a public service "Al Capone" and how well that worked out for the communities he had professed to be serving, the USA (in-fact the WORLD) is still reeling today from the aftermath of this initial organised criminality. When put on the spot the Orders members are fast to declare that "it's only pixels and to just get over it" or "if you don't like it, leave". CCP should hide it's head in utter shame for not recognizing and to act upon activity which so obviously DOES cause discomfort and IS causing it's PAYING MEMBERS a degree of unnecessary anxiety. This goes beyond being acceptable behavior in a game IMHO.

We all of us know that in a pixel world there are no emotions, but on the other side of a computer monitor ... life just doesn't work that way, and there are ALWAYS consequences to our actions in cyber space, ask any parent who's lost a child through cyber bullying and they'll tell you. A bit extreme of an example I know, but you get my point, no difference!
Ever been scammed on-line on Ebay perhaps or fallen foul to some other scam? It's not nice to be conned in any shape or form, and intimidating activity being "in-game" is no cloak to hide behind. Shouldn't we stand up to the ones responsible or is the truth that we just look out for ourselves now and laugh at the victims for not being more aware?
Ladies and Gents have we become so morally bankrupt to permit what we abhor in our RL's to now filter in and become the norm and accepted behavior even in the very place we try to escape to, to forget the world outside for a while? Not only is it being unchallenged but the protagonists have the balls to publicly recruit and justify their actions being in accordance with a "Code"!

After thoroughly examining all the information that I could about the Order, and now while I am presently (off-shore) working and cannot get into game, I have spent some time reading through the many Forums for information but seems no mater which forum, which topic, time and time again the Order is coming to the forefront. Warning signs becoming more and more prevalent, and to my mind come and old saying ..
... "All that is required for Evil to prevail is for Good men to do nothing!"
...

Well, I intend to do something .. however insignificant it may prove to be.
This is not a clarion call to others who may feel the same, I'm just airing my opinion which is my right, as is the next persons.
I know there must be HORDES of others who would be more willing but remain anonymous and that is completely understandable.. also many others who most likely never read the forums, but I will not remain so. There is no fear for those who are unwilling to be subdued by it.

I've no wealth of knowledge about Eve as yet .. seriously, I'm still very much only at the infancy of my learning curve but have learned enough that will act as solid foundation for good progression I believe. I plan to continue this and when I am ready .. have the experience and means to bring to bear and counter the Order.. it is going to be for me, my mission in game!

For Good or Evil.. It's unnecessary to advertise.. if the community wills it .. it will happen.

Needless to say, Le Judge's radical views put him on the radar. He is now officially a Person of Interest, and his corporation's ties to anti-Order resistance movements will be investigated with a fine-toothed comb. Le Judge also made the following reply later in the thread, the source of the quote at the beginning of this post:


"The entirely of my post had been on topic for "Minerbumping" and expressing my opinion.

I don't suggest Eve to be a "Safe Game" .. where did I ever say that? ... But it's my opinion and I don't accept under any circumstance that I should have to ACCEPT an environment where gamers are left free to intimidate and extort ISK from people who only wish to "PLAY A GAME".

You can window dress this all you like, hide behind your monitor and tell yourself whatever you wish to exempt yourself from responsibility of sometimes (even if only possibly) hurting others. But the fact remains, that is entirely what you are doing !
But i'm not concerned with the occasional ganker. Don't begin to put words into my post .. You really think that is what my post is all about? Me being ganked? ( LEARN TO READ )
I am explaining that it being "Organised" is my issue.. To the degree that many people are stepping up and joining the ranks of the gankers because they know they can get away with all manner of crap and push people around with impunity.
In a nut-shell all i'm saying is .. "I intend to push back!"

My beef is with the Order, or more specifically the "Code" .. the crap that is being force fed to us and shoveled out to justify unacceptable behavior on a massive scale. CCP are unable or unwilling to respond to it and I'm suggesting someone does.
But should you ask would it come as any surprise to me that some people would attempt to belittle my opinion? Miss-quote me entirely? Not in the slightest! Frankly I'd be surprised if it was not the case.

You'll have to get up very early to rattle my cage !"

I hope this post has been an eye-opener for everyone. We mustn't become complacent. The next time you see a sullen, hollow-eyed youth trudging across highsec in an industrial ship, know that you could be looking at the next Anslo or Ledrian Saisima or Mine Teck. Remain on your guard.
Posted by MinerBumping at 18:15