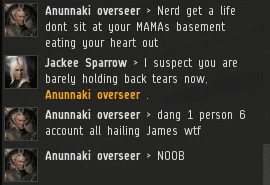 Each time the New Order makes first contact with a miner, the miner must decide what to make of us. 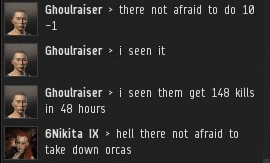 As our legend grew, many miners heard about us even before they laid eyes on their first Agent. 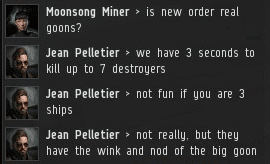 Eventually, the news about our Agents' heroism spread. But it was distorted through the lens of the bot-aspirants' troubled minds, and rumors were born. 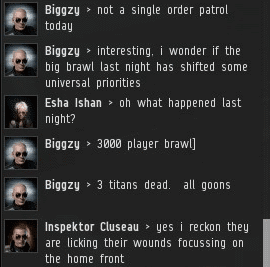 Activity in highsec was interpreted based on what was happening in nullsec. Rebel Inspektor Cluseau, seen here, speculated on the effect of the massacre at Asakai. 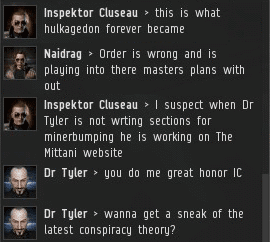 Conspiracy theories and rumors about the New Order have been the subject of many MinerBumping posts. 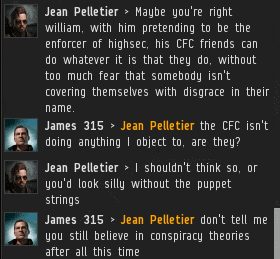 Curious to see if the old conspiracy theorists still held onto their beliefs, I was fortunate to run into longtime curmudgeon Jean Pelletier. 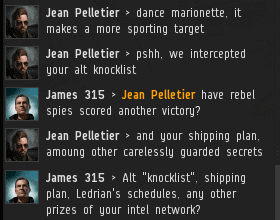 We had a lot of catching up to do. Jean informed me that he no longer needed to believe in conspiracy theories, because he was sitting on hard proof of the CFC/Order connection. 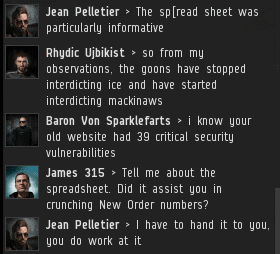 The smoking gun that tied it all together: A spreadsheet of something. 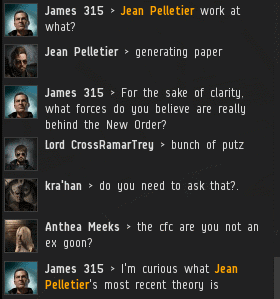 However, Jean preferred to speak obliquely on the topic. It simply wouldn't do for a rebel intel officer to talk about things in a direct, matter-of-fact manner. 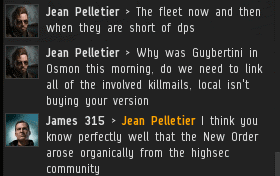 Jean began throwing out places and names. Agent Guybertini was given the honour of a name-drop, without any context. I don't want to say Jean was paranoid, but he was getting pretty close to passing out "Fair Play for Kino" pamphlets. 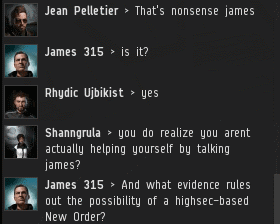 I floated the possibility that the New Order of Highsec arose from among the people I'd encountered in highsec, without any official nullsec sponsorship. Jean dismissed the idea out of hand. Too far-fetched. 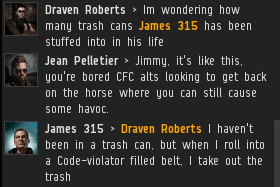 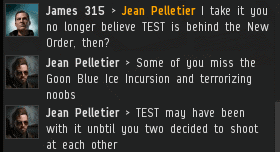 One of the more popular conspiracy theories had been that Goons and TEST were the same entity, and that they were behind the New Order. After the war between those two powers, things got muddled. Now any New Order Agents with connections to TEST presumably do not exist, or they were all my alts to begin with and never had such a connection. 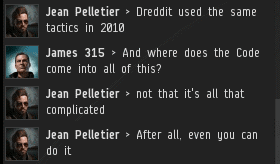 I could only speak to Jean Pelletier for a few moments before he got too grouchy to continue. Switching to nullsec terminology, he questioned CODEdot's "relevance" and then stormed out of local chat.

You know, it's funny. Rebels who search for answers will spend all day trading rumors, reading the tea leaves of nullsec happenings, and tracking Guybertini's movements. But they're so reluctant to go to the one place where they can truly discover the animating spirit of the New Order. It's the Code, folks. Download a copy of your very own from MinerBumping.com!
Posted by MinerBumping at 18:17