Previously, on MinerBumping... The Knights of the Order won a hard-fought battle against an Orca. Nearly half an hour later, the Orca pilot finally woke up and convo'ed Agent MotherSammy. Our hero recommended that the carebear pay 10 million isk for a permit, but she claimed she was down to her last 0.5 million isk, and couldn't get any more, because she couldn't mine.

After Part 1 of this post was published on MinerBumping, MotherSammy did Avacyn Eternal the favor of inviting her to read it. Avacyn was furious. She insisted that she wasn't really AFK for 25 minutes--she merely took 25 minutes to respond because she was busy "calming down". You can tell this is true, because she was so calm during that convo.

Avacyn also objected to the assertion that the mining drones found in her wreck had been used for mining. They weren't in use. The Orca was there to provide bonuses, clearly not a task that could have been performed AFK.

The EVEmail concluded with Avacyn's complaint that the MinerBumping post was "slanderous" and "borderline criminal". My dear Avacyn, there's no such thing as borderline criminal. Something is either right or wrong. Violating the Code by mining in highsec without my permission is as criminal as it gets. Now, on with the show. 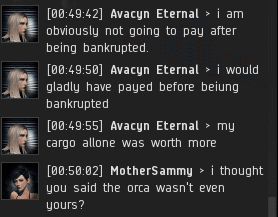 MotherSammy and Avacyn's convo continued. Avacyn repeatedly insisted that she had been bankrupted by the New Order attack, and that she couldn't possibly pay. 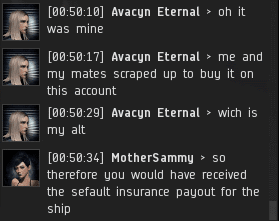 MotherSammy was skeptical. What about the funds Avacyn would have received from the default insurance payout when her Orca blew up? 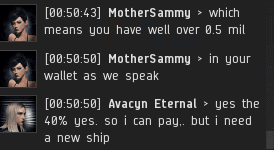 Avacyn suddenly realized she had the money all along. She still felt she needed a new Orca, though. 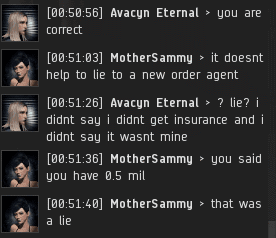 MotherSammy wouldn't let up. She interrogated Avacyn about her earlier claims of poverty. 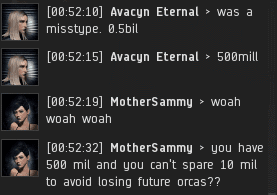 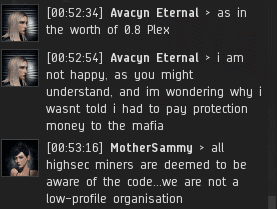 Agent MotherSammy successfully established that Avacyn had plenty of money to spend on a permit. But Avacyn was slippery as an eel. What new excuse would she come up with? 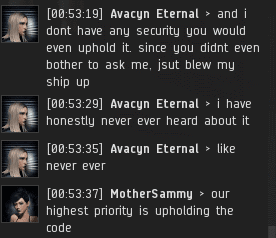 Next, Avacyn made the outrageous claim that she had never heard of the New Order or its Code. Even if she'd been living under a rock for the last year, she still would have heard of us. People who mine rocks talk about us all the time. 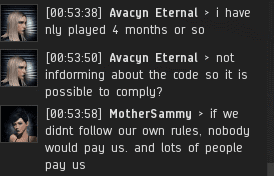 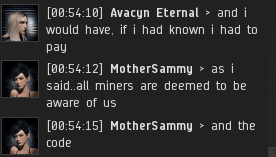 Once again, a "new" player of more than four months in EVE. This is no excuse. I know of plenty of people who first read MinerBumping even before they came to EVE. As for the rest, you can't spent four months mining in highsec without "bumping" into us. We're the only thing the carebears ever talk about in local. 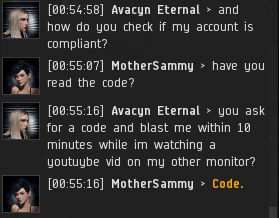 Avacyn opened her mouth to change feet. While making a disdainful remark about the Code, she admitted to watching YouTube videos during mining time. MotherSammy had her hands full with this carebear. Could she be saved?