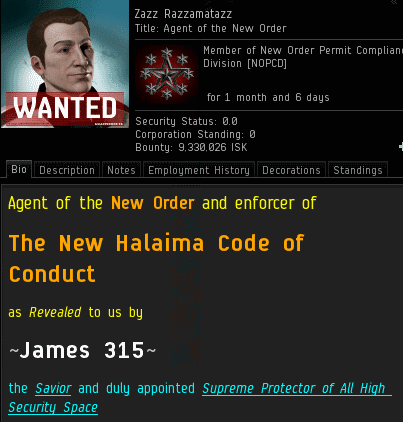 Zazz Razzamatazz is a proud Agent of the New Order. He loves the Code almost as much as he loves the letter "Z". And when he sees a miner disobeying the Code, he swings into action.

Zazz was flying through the Halaima ice anomaly on a routine patrol. He spotted Arnisador piloting a Mackinaw and behaving suspiciously. So Zazz did what any Agent would do. He tapped on the Mackinaw's window with his Stabber and asked if everything was okay.

Zazz's finely-honed instincts were right on. Arnisador's own words in local convicted the miner of being a villain. Clearly, clearly, Arnisador had no love for the Code.


Zazz Razzamatazz > Arnisador you have been removed from the ice belt. Pay 10mil to resume mining activities.
Arnisador > suck a dick
Balthazar Sikadi > Zazz Razzamatazz yo, is there anything over in caldari land that's easy to fit a 100MN to? Looks like fun, but skillqueue on this account is for another char
Zazz Razzamatazz > This ship is the best for bumping
Arnisador > better than the fuckin big wheel you were in last time....you are learnig kiddo
Zazz Razzamatazz > What are you doing Arnisador ? You can't mine that without a permit
Arnisador > just wait till you leave

Freedom of speech is a fine thing. But the Code has done a lot for Zazz, and he doesn't like to see miners showing it such disrespect, especially on New Order soil. Arnisador was defiant, vowing to resume mining once Zazz left. But as I said, if I have enough Agents, I can be everywhere... 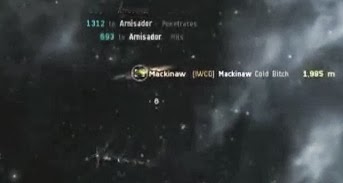 Agents Connor O'Keer and Stimfisk Lennelluc came out of nowhere and landed within firing range of Arnisador. The miner went boom. They also recorded a video of this kill, which you can watch on YouTube. Above, you can see a screenshot from the video of Arnisador at the "Schrödinger's Mackinaw" moment: He is simultaneously a Mackinaw, a wreck, and a pod.

It was an extraordinary victory. Arnisador had been bumped out of the ice anomaly and then killed. What a great lesson for Arnisador and all the other carebears in system. Connor wasn't lying; I send my regards with each lossmail that a Code-violator receives.

Zazz thought he had made his point: The New Order is too big to run from. Arnisador seethed, complaining that Zazz had called in support from other Agents rather than pulling the trigger himself. But the New Order is also big enough for bumpers and gankers alike.

As Arnisador's pod retreated to the station, Zazz moved on. He was surprised to see an Orca piloted by Kasmire Long assisting a mining vessel piloted by Menja Long. Neither had permits. So Zazz pulled up his sleeves and began bumping Menja. He immediately received a convo from her.


Zazz Razzamatazz > Greetings
Menja Long > what the hell are you doing?

One line into the convo, and Menja was already channeling Mine Teck. Not a good sign.

The situation escalated far more quickly than Zazz could have imagined. Menja was ready to petition him, and she wasn't going to do it the slow way. She had a telephone. Could a representative of CCP already be on the other end of the line?

Zazz had encountered a space lawyer of the first degree. She was absolutely confident that she could ban the bumper, and that would be the end of it. But this was Halaima, birthplace of the Code, and Zazz had no fear of space lawyers. The conflict between Menja Long and the New Order was only beginning.