The Hunt for the Truth, Part 1 In Kamio, a carebear named alexhunter seyah was busted for illegal ice mining by a group of Agents led by Lord Mandelor. This police action, and its aftermath, were the subject of two MinerBumping posts. Our heroes attempted to reason with alexhunter, but he refused to purchase a mining permit. Instead, he vowed revenge. 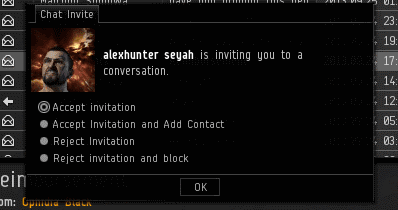 As I was conducting my correspondence, I was suddenly convo'ed by alexhunter seyah himself. Had he finally come to his senses? If so, I could tell him to transfer me some isk, and that would be that. 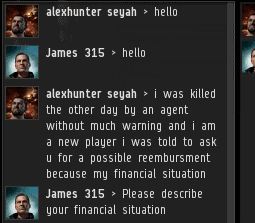 Unfortunately, alexhunter had got it backwards. He wanted me to send him money, rather than the other way around. I pity the miners for their greed. 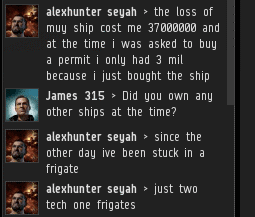 alexhunter gave me a sob story. I was instantly suspicious, since this particular sob story was standard issue. "I have no money, I just bought a ship" is a square on Miner Bingo, for goodness' sake. It's a tech I sob story.

If you can imagine a "flashback" sound, now would be a good time for it. alexhunter had threatened to use a battleship against Lord Mandelor. Now he was telling me he was down to a pair of frigates.

Luckily, I was able to remove alexhunter's phantom battleship from the New Order Threat Matrix. We only had a couple rogue frigates to worry about. 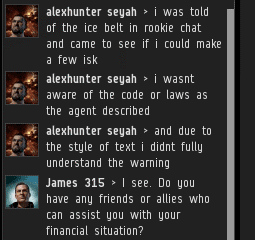 But there was another potential threat I wanted to get off the chessboard. 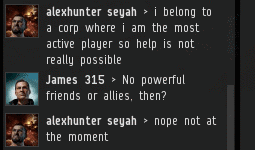 ...Now I had an estimate of alexhunter's "powers and allies". He was fresh out of both. 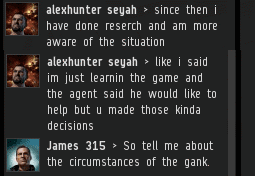 One thing that I'm really proud of is that apart from my scamming days, I've always played a good, clean game. I don't have much use for lying carebears. If alexhunter wanted to earn himself a spot on the Red Pen list, I wasn't going to stop him. 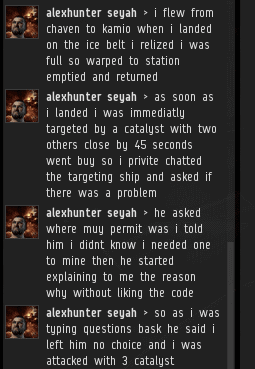 alexhunter gave me the same story he had given to my Agents, when he complained about not getting the chance to finish a mining cycle before he was killed.

Yet the illegal ice had been found in his wreck, pointing an accusing finger at the man. 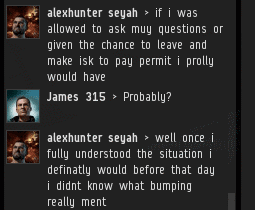 alexhunter had lied to my Agents, and he had lied to me. I'd given him the opportunity to come clean. After all, granting absolution to rebel miners is a hobby of mine. I was happy to hear alexhunter confess the truth about his lack of battleships and allies. I wasn't so happy to hear him lie to me about the timing of the gank. If there was any hope for alexhunter, I would need to find a way to get him to tell me the truth and nothing but.