Previously, on MinerBumping... As the rebel miners of Kino raged against the New Order, Dr Robotnik-x began a crusade to convince everyone that all New Order Agents are actually my alts. 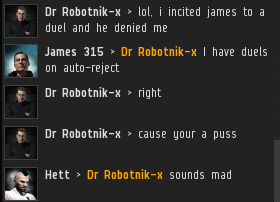 In a cringe-inducing breach of protocol, Robotnik invited me to a duel without first going through the proper channels. 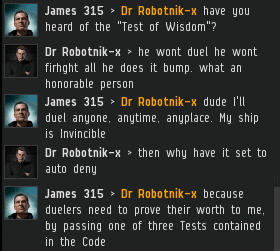 Robotnik had a lot to learn, and most of it was in the Code. Everyone knows that one must past the Test of Wisdom, Test of Valour, or Test of Fortitude before they earn the right to duel me.

Not only did Robotnik refuse to accept the authority of the Code, he questioned its objectivity. He felt it would be unfair for a duel participant to set the rules. Paradoxically, he tried to set the rules himself. 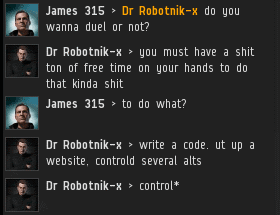 As Robotnik viewed the contents of MinerBumping, and as he calculated the number of alts I must have, it boggled his mind. If all Agents are my alts, then I must have hundreds of accounts. 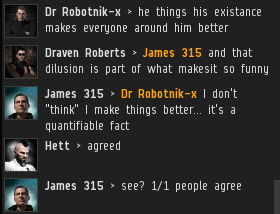 My support among the highsec community is wide and deep. Random local Hett agreed, and I was instantly at a 100% approval rating. 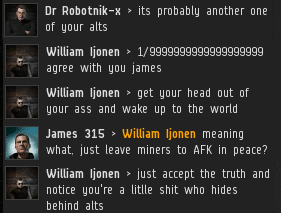 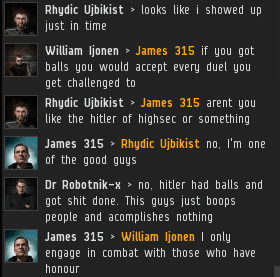 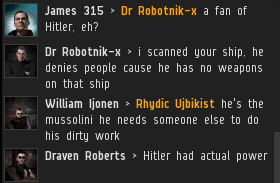 As time went on, Robotnik's anger grew. His hatred of me and my army of "alts" made him nostalgic for Hitler, who had no alts. 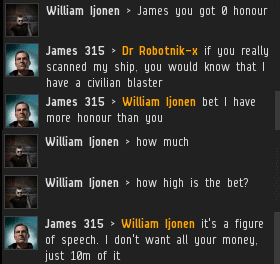 Incredibly, William questioned my honour. This was disappointing, because I have been very explicit in telling people that I have lots of honour. 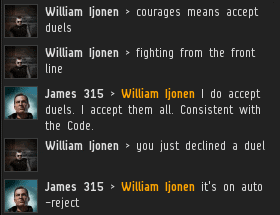 Talking to William was like talking to a brick wall. Even so, he seemed surprisingly willing to speak with someone whom he believed was besieging Kino with an army of alts. As more supporters of the New Order spoke up, Robotnik went dizzy with paranoia. I tried to help him, but he was drowning in denialism. 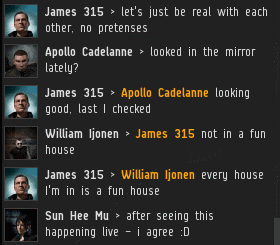 I am an optimist. Always have been. It's my firm belief that every man, woman, and child in highsec can be rescued by the New Order and its Code. The toughest nuts to crack are the nuts who refuse to acknowledge the existence of the Order. As the years go by, more and more Agents flock to the banner of the New Order and declare themselves Agents. Denialists will have a choice: Accept the truth, or embrace the mad vision of an EVE filled with nothing but alts.
Posted by MinerBumping at 18:33