Previously, on MinerBumping... Rebel mastermind Dr Robotnik-x began slandering the New Order to anyone in Kino who would listen. He revealed himself to be a denialist, claiming that the New Order doesn't really exist, and that all my supporters are really my alts! 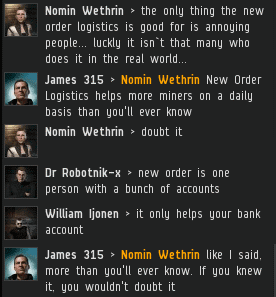 Fueled by Robotnik's passion for his new conspiracy theory, other disgruntled miners in the system expressed their displeasure toward the Order. 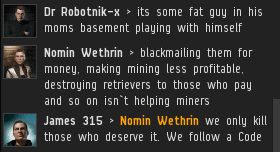 I have so much empathy for other people that it's practically a superpower. I could feel instantly that Nomin Wethrin was a wounded soul, a highsec miner who had been killed repeatedly in the past. I reassured her that the New Order wasn't like the other gankers she knew. 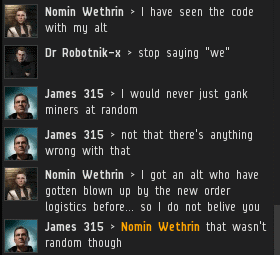 Indeed, Nomin had been ganked by Knights of the Order. It was clear that Nomin still felt the sting of that encounter. I moved quickly, making sure she knew that it was her own fault for being attacked. This is a very empowering message for a victim to hear, because it means that they can prevent the bad thing from happening to them again. 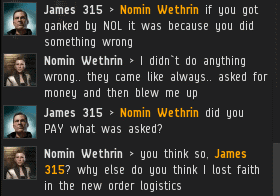 But Nomin wasn't having it. She insisted that she had paid for a mining permit. Could it be true? 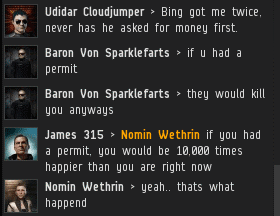 I doubted Nomin's story. If true, however, her story could blown the credibility of the Order wide open. 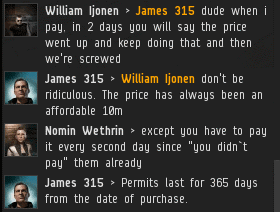 Highsec carebear and aspiring bot William Ijonen trotted out the same old miner fears about the mining permit price going up. It's been well over a year now, and the price is still 10 million. Time to put that nonsense to rest. 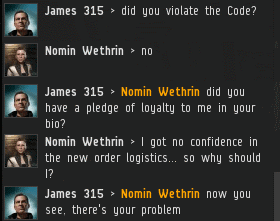 Gravity is one of the fundamental forces of the universe. It means that the other shoe will always drop. In this case, the second shoe came in the form of Nomin admitting she never put a pledge of loyalty in her bio, and that she lacks faith in the New Order--Code violations both. Her death sentence(s) had been just. 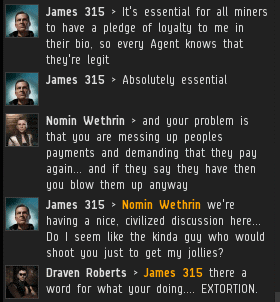 As I did my victory lap, a random rebel in system had a "Eureka!" moment and became the first miner ever to say that I'm guilty of "extortion". In his mind, that is. Everyone else has heard that one a million times already. 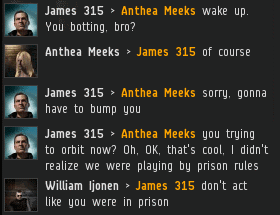 As the Kino system celebrated the continued credibility of the New Order, I located and punished a random bot. Foolishly, she attempted to evade me by orbiting the ice she was mining. Another invitation to display my power. 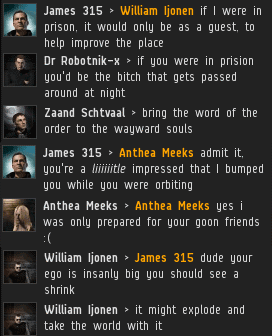 Anthea Meeks had to admit that I was very proficient in my bumping. The bumpers of the Order know how to manually navigate in space, rejecting the comforts of the "approach" and "orbit" commands that so many "elite" PvP'ers rely upon. 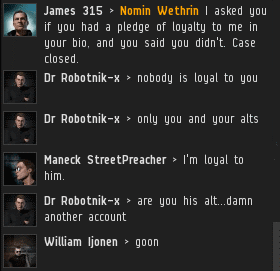 Robotnik's ally, Nomin, had been discredited. He returned to the comforting delusion of denialism, but was rudely interrupted by a pack of Goons who entered the system and pledged their support for me. 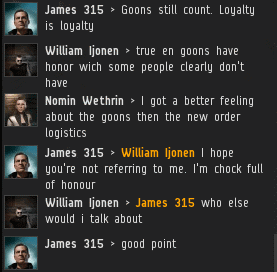 Incredibly, after having experienced the benefits of the New Order's governance, Kino rebels were now looking fondly upon their natural enemies, the Goons. Could a carebear-Goon rapprochement be in the offing?

To be continued...
Posted by MinerBumping at 18:44