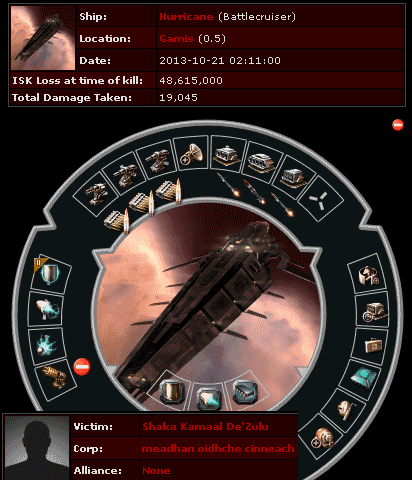 This. Perhaps the worst suicide ganking fit since the smartbombing Merlin.

After Agent Kalorned successfully bumped Shaka Kamaal De'Zulu out of the ice anomaly, this EVEmail was sent. Shaka's question answered itself: If it's a "grind", you shouldn't be doing it anyway.

Shaka responded to Kalorned's warning by pointing out that he was in the same corporation as two people. No, those two don't have mining permits or anything. They were apparently random people.

As always happens when a carebear argues with an Agent, the Agent won the argument and the carebear resorted to foul language. Kalorned underestimated Shaka's rage: Just two minutes later, the aforementioned worst-gank-fit-ever Hurricane plopped into the ice anomaly and unsuccessfully suicide ganked Kalorned's Stabber. 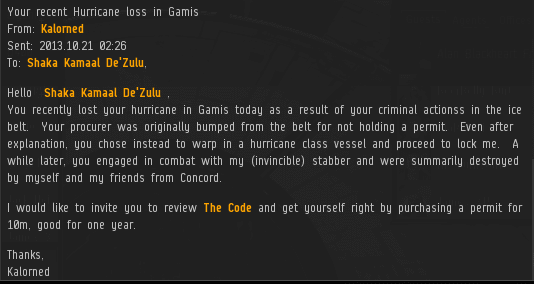 Having thus engaged in elite PvP, Kalorned emerged victorious. He could have gloated. He had every right to. But instead, he treated the glorious battle as a teachable moment and tried to help make Shaka a better EVE player. What a guy.

...But Shaka wasn't ready to go down the road of self-improvement just yet.

Kalorned kept prodding Shaka in the right direction, but he wouldn't budge. Instead, Shaka directed threats against his new benefactor. I have to give Shaka credit for one thing, though: Most carebears will assign the New Order's doomsday to some point in time weeks or even months in the future. Shaka had doomsday ready to go in four hours!

Shaka chose not to explain what would happen in four hours; he wasn't willing to give up the element of surprise. What did provide was a trio of increasingly bizarre EVEmails. The jibe about Malcolm X is particularly hurtful to the New Order, in light of our struggle for miner rights. Besides, some of my best friends have X's in their names. Agent xxBLACK SKULLxx 929 is even CEO of a CODE. corp.

Just minutes into the 4-hour deadline, Shaka's faith in his revenge was running out. His new plan involved running away to another system and catching Kalorned's steez.

Still, the rebel remains an ever-present threat. Be on your guard, Agents of the New Order: The next time you patrol an ice anomaly, you could be shadowed by Shaka Kamaal De'Zulu. And you don't even want to know how he fits his stealth bombers.
Posted by MinerBumping at 19:02