The New Order is all about making highsec miners' dreams come true. Sadly, due to the self-destructive bot-aspirancy so commonly seen today, many miners' highsec dream has become a nightmare. The New Order must therefore swing into action and wake the carebears up. On that note, let's check out some wake-up calls that took place during the week of September 29th @ 00:00 EVEtime through October 5th @ 23:59 EVEtime. 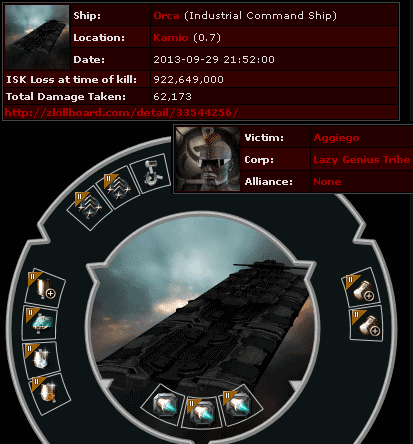 Knights of the Order love a good fish fry. Among the Orcas killed this week was Aggiego, who wasn't fooling anyone with his token shield mods. He lost over 900 million isk when Agents xxBLACK SKULLxx 929, Kristos Valamache, Agent 057, D400, Tyranis Gord, Maestro Ulv, DeepBlueMax, Darkstar22, admiral root, Pacanes Omega, Zane Arnolles, PanzarPanda, Riemansum, Backbastarea, and Capt Starfox rallied together and put him out of his misery.

(And yes, I realize that orcas are mammals rather than fish, since they have hair, produce milk, are warm-blooded, breathe air, etc. But since EVE Orcas do none of those things, I consider them to be fish.) 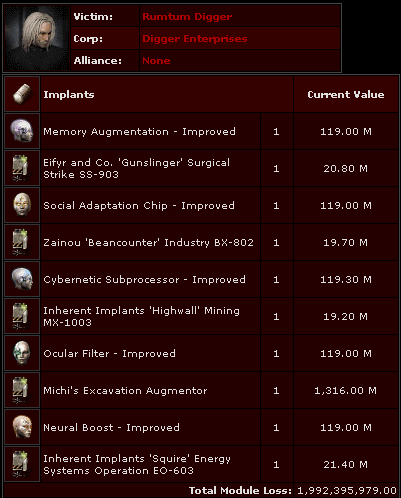 Rumtum Digger thought he was as clever as could be, hiding a Michi's Excavation Augmentor among his other implants. The name "Digger" gave him away, though. Enhanced mining abilities in the head of a Code violator? That needed to be removed. So Agent D400 carefully extracted the implant. Sadly, nothing could be salvaged after the operation, so Rumtum Digger was 2 billion isk poorer. Rumtum, please remember that there is a 10 million isk copay for all health care received in highsec. 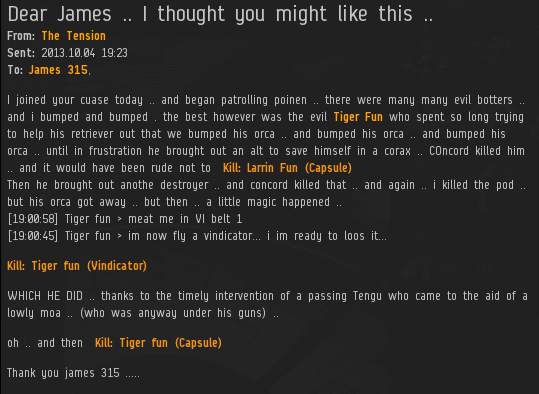 Seeing only one hope for highsec, The Tension decided to enlist in the New Order. He joined us with a bang, as you can see: 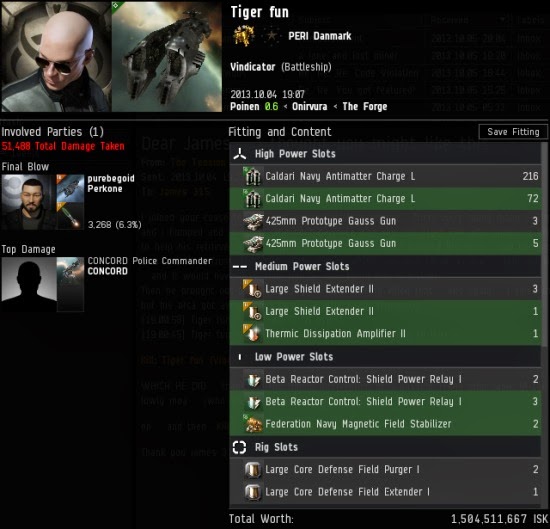 Yes, after being bumped long enough, Tiger fun went crazy and got himself CONCORDed in a faction battleship Vindicator worth 1.5 billion isk. purebegoid was lucky enough to get in on the killmail, which he linked for all to see. 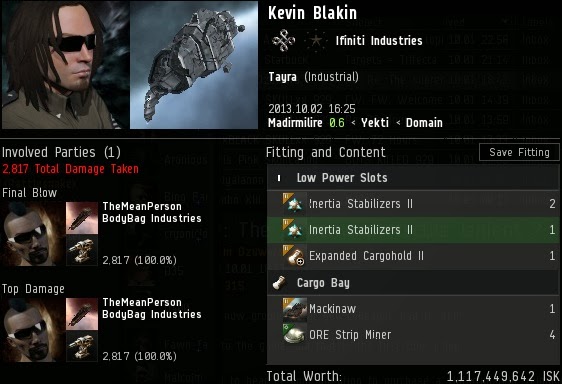 We've got the rebels on the run. Like cockroaches, they skitter and skulk around highsec. Kevin Blakin attempted to transport an unlicensed Mackinaw in the cargo of his new Tayra, along with other contraband totaling over a billion isk. TheMeanPerson taught Kevin a very important lesson: The sun may set, giving cover to the creatures of the night, but the sun also rises. The New Order is a rising sun indeed, and a carebear's crimes will always come to light. 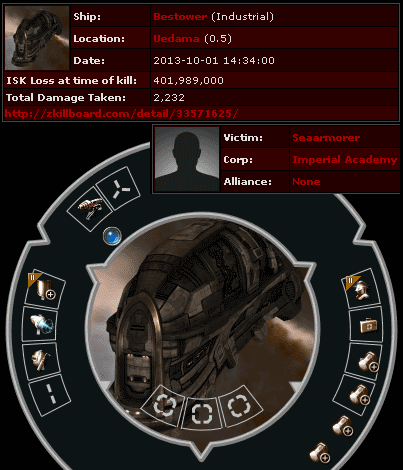 Seaarmorer didn't do himself any favors when he decided to fit up a tech I industrial Bestower with 400 million isk of cargo. Agent D400 was not even mildly intimidated by Seaarmorer's fit, which included a small laser and a hull repairer. D400 easily won the duel, and the mean streets of Uedama got a little nicer that day. One less criminal to worry about.
Posted by MinerBumping at 19:46