The Hunt for the Truth, Part 2

Previously, on MinerBumping... Illegal miner alexhunter seyah was greedily hoarding ice in highsec until Agents of the New Order destroyed his ship. After his threats and profanity failed to move them, alexhunter decided to appeal to the Saviour of Highsec himself, yours truly. I interviewed the young carebear as part of my own investigation into the affair. 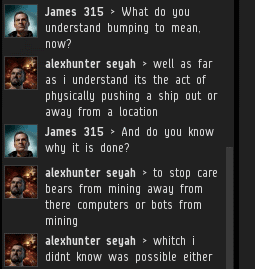 alexhunter wasn't interested in taking responsibility for his crimes. He sought asylum as a clueless newbie. 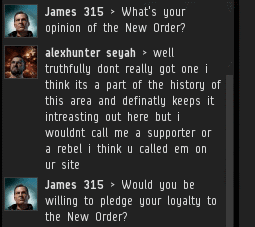 I knew I needed to start from the very beginning, and find out what alexhunter knew. When I asked him about the New Order, he claimed neutrality. No such thing. 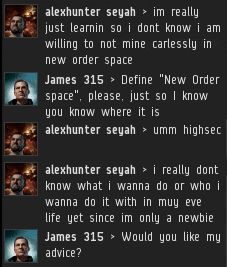 I was touched by alexhunter's admission that he didn't know what he wanted to do with his life. There are so many lost carebears in highsec who just need someone to tell them what to do. That's where I come in. 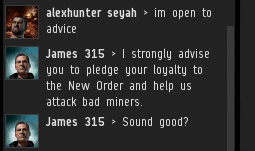 alexhunter had spent his months in EVE mindlessly AFK mining. I had bigger plans for him. 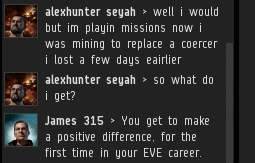 alexhunter's reaction sent off some alarm bells: He was still only interested in what he could get out of the deal. He was isk-focused, rather than Code-focused. 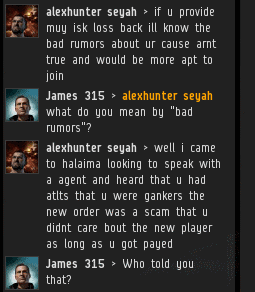 It was as I feared: alexhunter's mind had already been poisoned by all the slander and slime spread around highsec by the rebels. 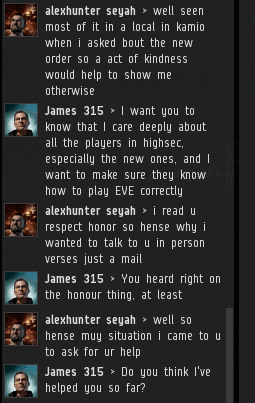 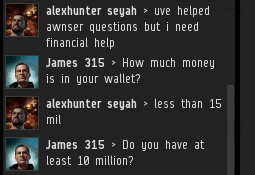 Now it was time to find out if alexhunter was still a lying little bot-aspirant, or whether he was willing to turn over a new leaf. The warning bells sounded again. "Less than 15 mil"? Like, 14 million? 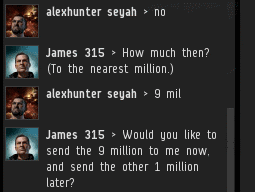 Just as I suspected. If you have 9 million in your wallet and someone asks you how much you have, there's no way you'd answer "less than 15 million". He was deliberately giving a figure of less than 10 million, because he didn't want to shell out for a mining permit. But since he'd admitted he was a millionaire, I didn't feel bad about telling him to start giving me what I was owed. 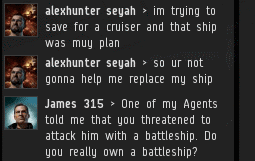 alexhunter again made a comment contradicting his earlier threat to attack my Agents with a battleship.

Getting away with crimes was so much easier before they invented the flashback. 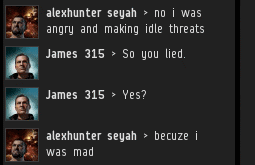 At last, alexhunter confessed one of his lies. He was a broken man. When carebears hit rock bottom, it's time to lead them into the light of the New Order. Would alexhunter follow?

To be continued...
Posted by MinerBumping at 17:51