Suicide Ganking for the New Order

I often write about the manifold means of promoting the cause of the New Order and its Code. In addition to bumping miners, Agents have distinguished themselves by joining mining corps to shoot blues, declaring wars and demanding ransoms, can-flipping, winning duels, and even threatening wardecs to get Code violators expelled from their corp.

Today we highlight a classic form of PvP: The suicide gank. 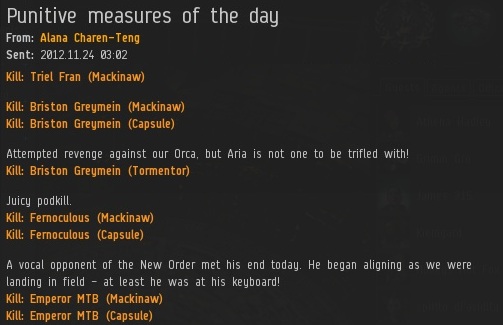 Agents 290xanaots, admiral root, Alana Charen-Teng, Casanunda, PinkOboe, and Winchester Steele formed up in the Abudban system. Each in a destroyer, they set out to suicide gank inveterate violators of the Code. Aria Stane provided Orca support to our heroes. 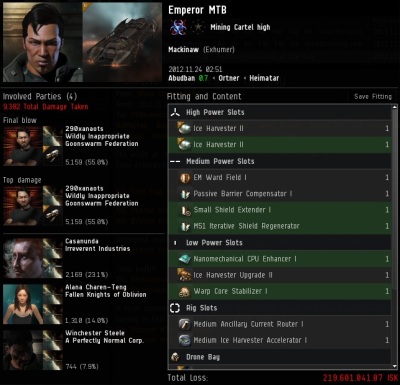 Rebel miner Emperor MTB has a history of showing disrespect to Agents of the New Order. His Mackinaw was destroyed, as was his Capsule. 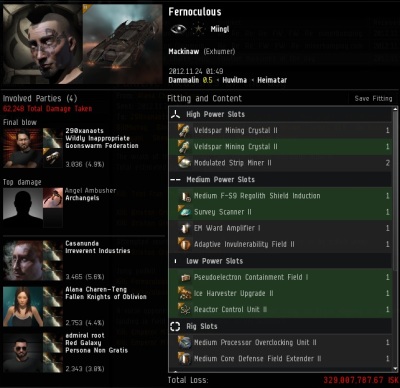 The gang also went to some ore-mining systems in the Abudban neighborhood and exacted swift justice for the Code. Fernoculous had the gall to mine without a permit just two jumps from our vacation home. He was punished with the loss of his Mackinaw. 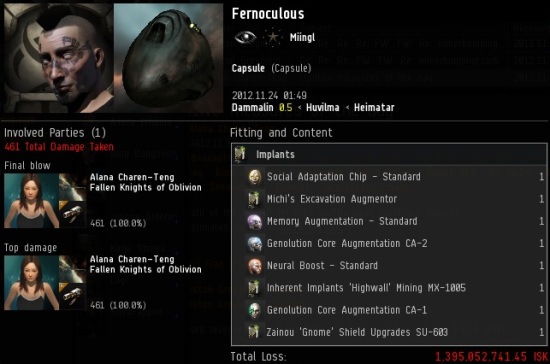 Agent Alana wanted to make sure Fernoculous didn't forget his lesson. For the third time during the operation, she squeezed out a podkill. Fernoculous lost nearly 1.4 billion in implants--a costly reminder of how much cheaper it is to pay one's annual 10 million isk mining fee.

In all, over 2.5 billion isk of damage was inflicted on the miners that day. Let it not be in vain, miners! If you don't get right with the Code, the next time it could be you.
Posted by MinerBumping at 19:11