At Whom Permission to Take?

Many of our Agents enjoy a bit of lowsec PvP every once in a while. They find it relaxing. Especially in comparison to the hectic pace of elite highsec PvP. The fact that our Agents occasionally kill people in lowsec is deeply, deeply embarassing to the "Grr CODE" crowd, which likes to accuse us of only shooting ships that can't shoot back.

Agent C-ta Vilosa and some friends from the Gallente Federation went in a lowsec roam. They'd heard disturbing reports about "pirates" with positive sec status.

An Agent of the New Order, when placed in a friendly fleet, serves as a force multiplier. The experience of a single Agent works wonders. We know how to make the most of any situation, no matter how exotic. We've seen and experienced things you wouldn't believe.

Our Agent, along with 11 other members of the fleet, got on the Retriever killmail. So did a Guristas Plunderer. Of course, the untanked, AFK Retriever had a smaller chance of survival against the 12-man fleet in lowsec than he would've in highsec. Like I said, lowsec roams can be relaxing. But then, suddenly, a pair of Dominixes appeared on scan!

Note the isk greed and bot-aspirancy at work here: The Dominix pilots were in the same alliance as the Retriever, but they didn't bother to help him. Nor did they even react to the death of their comrade. They went on, mindlessly ratting. The fleet destroyed one of the selfish Dominixes.

SET Tanator was the pilot (if you can call an AFK player a "pilot") of the untanked Retriever. We've all had encounters with ill-mannered Russian miners, but SET knew power when he saw it. He wanted to know at whom permission to take.

Our Agents, working together, form an intricate tapestry of goodness and wisdom. When Salah ad-Din translated the Code into Russian, he created a ripple effect of Code-compliance that would help rescue many miners in the future.

For someone in a lowsec pirate alliance, SET was surprisingly interested in purchasing a mining permit--even if it is divorce. I know plenty of carebears who could learn a lot from SET. 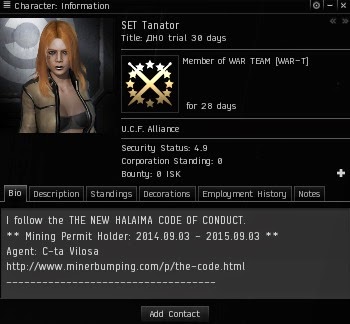 Victory! SET Tanator accepted the authority of the New Order and its Code. None of that "you can't claim sovereignty in lowsec" or "it doesn't say New Order in the upper-left corner of the screen" nonsense. Just straight to business.

Despite his bad habits, SET turned out not to be such a bot-aspirant after all. He was willing to brave lowsec, interact with other players, and participate in the emergent gameplay that is a mining permit. Maybe it's easier for lowsec players to accept the authority of others. But the New Order isn't about doing the easy thing. We play EVE on hard mode. We're out to save highsec.
Posted by MinerBumping at 17:30