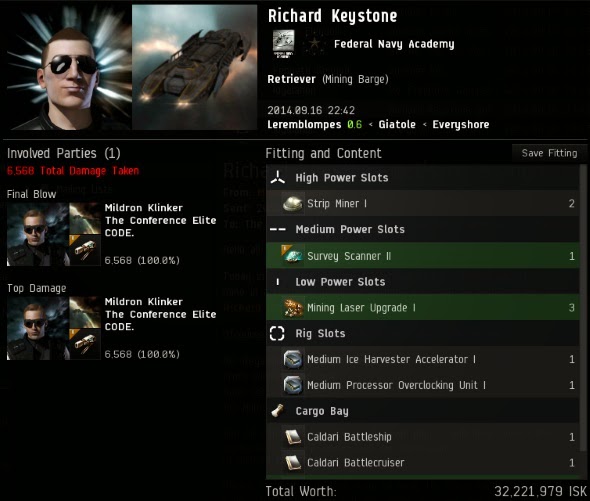 Richard Keystone fancied himself quite the PvP scholar-to-be. He kept his future battleship and battlecruiser skillbooks in his Retriever. As if their presence made him less of a miner. If you're an AFK ice miner in highsec, an entire library of skillbooks won't save you. Only the Code will.

The ambitious miner had no use for the Code. He said he would be in a battleship Soon™. Sadly, we all know that if we check in on him five years from now, he'll still be camped out in a highsec ice anomaly. Unless an Agent rescues him.

Agent Mildron Klinker wanted to help. But Richard was busy shouting at his fellow miners in local. This is how rumors spread!

Richard was huffing and puffing like he'd just finished running a marathon. His warnings fell upon deaf ears. Protip: If you want to get a miner's attention, take away his mining ship. He'll be preoccupied otherwise. It's like trying to talk to someone while they're tapping away at their smartphone.

For some reason, Richard thought that if he repeatedly said "miners" in local, that would increase the chances of a miner paying attention. If only it were that simple--we could save a lot of money on antimatter!

If you're watching local and you hear one thing from an Agent, and another thing from a hysterical miner, which one will you believe?

If you want to change the world, prepare to have a bunch of people who don't know you saying "fuck you". The world doesn't want to be changed. This is why world-changing men and women must vote on the world's behalf, by proxy. Otherwise we'd all still be living in the stone age, in caves, with no internet. CCP would lose money.

Richard conceded the New Order and/or Mildron Klinker had fancy names. A good first step. Yet Richard wouldn't buy a permit. What was he waiting for?

Eventually Richard will have a battleship with enough firepower to destroy the New Order once and for all. Fine. Until then, he can buy a permit like everyone else.

As Mildron continued his important work of killing miners, Richard came to realize the fatal flaw in any anti-Order plan: You can't coordinate with AFK people. It took rebel leader Anslo weeks to figure out the same thing.

When asked why he didn't see the gank coming, Richard blamed a bad camera angle. What is this, Zelda 64? The real problem was the angle of Richard's eyeballs: They were facing away from his computer screen.

Defeated, Richard began to seriously consider purchasing a permit. He came so close to accepting the Code!

Alas, at the last moment, Richard was led astray by some bad advice. He chose the path of resistance. It's a path that, as all the other rebels have learned, doesn't take one very far in life. One day Richard Keystone will be back. When he finally does join the New Order, we'll give him some skillbooks to read. Train Code V, everyone.
Posted by MinerBumping at 17:14