Before I say anything else, we have a very special podkill to show you this week. Don't miss it!

Good PvE'ers take pride and comfort in the sight of our fearless Agents patrolling highsec. The New Order is here to ensure your stay in empire space is an enjoyable one. Of course, there is no genuine enjoyment of EVE in highsec, apart from the Code. In the long run, failure to comply leaves one feeling empty. Therefore it is necessary to kill all those who violate the Code. Let's take a look at some players whose enjoyment of EVE was enhanced during the week of October 19th @ 00:00 EVEtime through October 25th @ 23:59 EVEtime.

And in case you're wondering how likely it is that your carebearism will be detected and penalized, consider this: 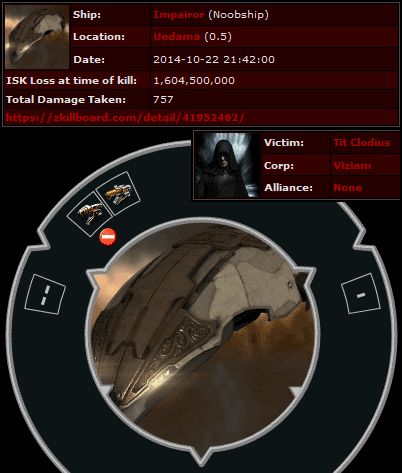 Tit Clodius was puttering around in a rookie ship, autopiloting his way through Uedama. He was caught and terminated by Agent PV Rock. Before you carebears start in with any of that "bullying new players" business, take a look at the isk value of the kill. 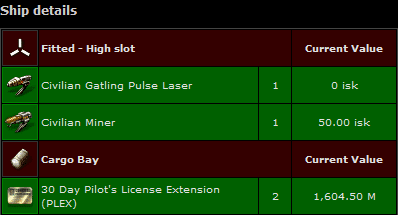 A pair of PLEX in the cargo of a rookie ship? There's no reason to be hauling around PLEX like that. Under the Code, it's considered evidence of RMT. We don't take kindly to such things. Tit wrote PV Rock a friendly little note:

Thank you very much, i've lost two plexes just due to lack of knowledge of Your System, being here for the first time. Nice day/night to You. Hope, my 2 plexes will lift your mood. With greetings from Ukraine!

Oh, also, having a "Civilian Miner" equipped to your ship without a mining permit? That suggests an intent to illegally mine. If you cannot yet afford a permit, please unfit the Civilian Miner from all your rookie ships before undocking. 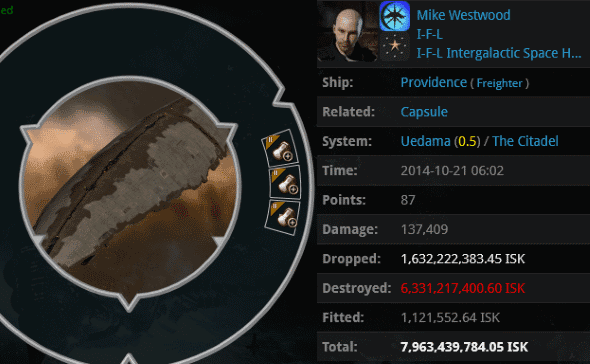 Among the many freighters killed lately was Mike Westwood's Providence. He had a lot of garbage in his cargo, but this did not go unnoticed: 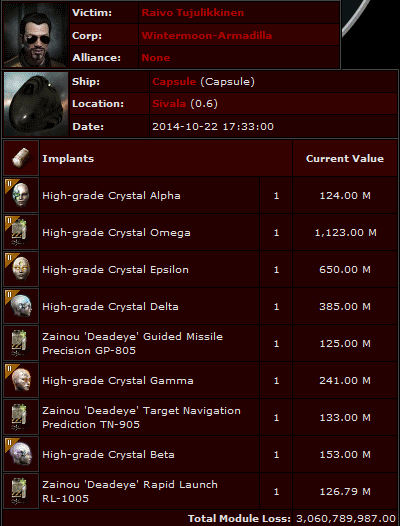 Raivo Tujulikkinen's crystal set was shattered by Agent PV Rock, who's still killing auto-piloting bot-aspirants, in case anyone hasn't gotten the memo yet. When put on notice, the carebear tried to explain away his crimes in a convo.

Rights are funny things. Your right to fly a ship ends where someone else's right to blow up your ship begins.

Raivo reasoned that our inability to stop 100% of crime makes us bandits. By that logic, all law enforcement is banditry. Yet, at the rate we're going, one day we will stop all Code violations.

Who am I? Let me put it this way: Before doing something, you should ask yourself, "Would James 315 approve of this?" If not, don't do it. The same principle applies to thoughts as well as actions, since we all know bad actions are merely symptomatic of bad thoughts. 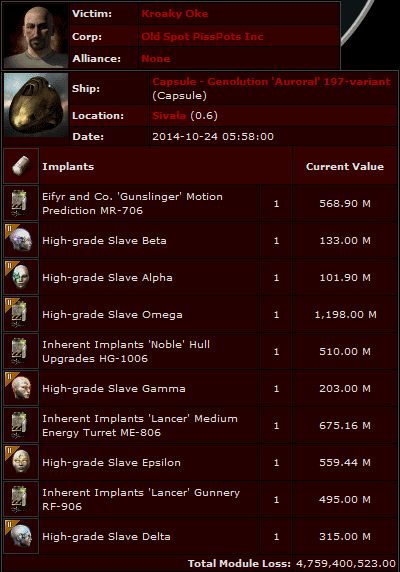 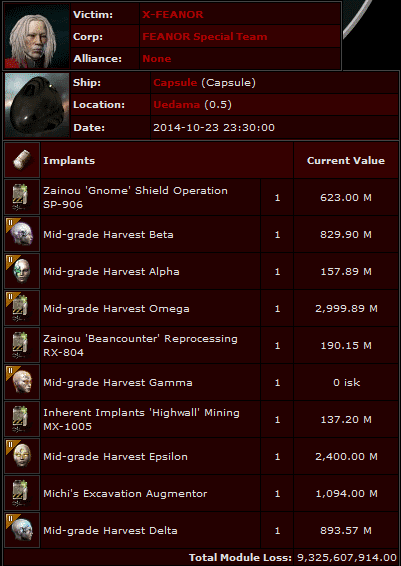 Now this is a podkill. X-FEANOR was autopiloting in a 4.7 billion isk freighter. After the freighter was dispensed with, Agent Oshrog moved in to smash the pod. Your eyes do not deceive you: It's worth over 9.3 billion isk.

In fact, if you look at the Mid-grade Harvest Gamma implant--part of the set that improves mining lasers, of all things--it lists the isk value at zero, since Eve-Kill lacks market value for it. zKillboard values that implant at 554 million isk. Taken together, that's over 9.85 billion isk. Almost 10 billion isk for a single pod. This is our most expensive podkill to date.

Consider what X-FEANOR was thinking when he went AFK and set his freighter to autopilot through Uedama with its cargo and a nearly 10 billion isk pod. Your immediate reaction might be, "He wasn't thinking." He was, though. X-FEANOR was thinking highsec is 100% safe, and that he was taking no risk at all. He was thinking the Code isn't important, that a 10 million isk mining permit isn't worth it, and that the New Order poses no threat to his operations. He was wrong on all counts.

We could have argued with X-FEANOR. We might've tried to reason with him. In this instance, it was far simpler to give X-FEANOR a practical demonstration. The question for the reader is, what kind of person are you? Are you the kind who listens to reason, or are you the kind who needs to lose a 10 billion isk pod to learn your lesson?
Posted by MinerBumping at 22:18