It's that time again--time for the good people of highsec to shower the New Order with money! 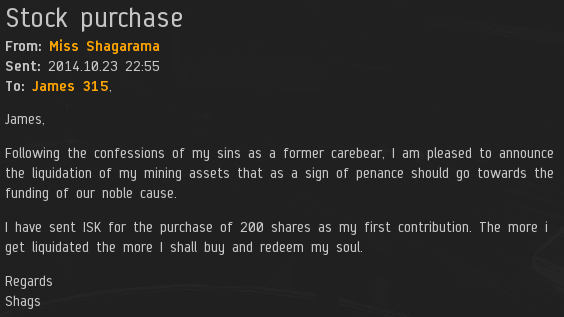 People give money to the New Order for all sorts of reasons. Some, like Miss Shagarama, do it to turn their lives around. Others do it simply because it's fun (try it!). But for most, the purchase of New Order shares represents the most efficient vehicle for assisting our Agents in their quest to save highsec.

The Conference Elite gained 1,000 additional shares by way of its CEO, loyalanon, who is currently the #1 PvP'er in all EVE according to zKillboard. Thanks to the new purchase, we've passed the 455 billion isk mark, and TCE earned yet another Supreme Protector's Tip of the Hat™ by proxy.

Miss Shagarama, the author of the inspiring EVEmail you just read, bought 200 shares. This sent us over the 456 billion isk mark and redeemed her soul to a degree. Miss Shagarama earned a Supreme Protector's Tip of the Hat™. She's come a long way!

Mistrum Ridcully bought 1,882 shares--an interesting number. It also happened to be barely enough shares to send us over the 457 and 458 billion isk marks and earn Mistrum a Double Supreme Protector's Tip of the Hat™.

Zepher Helen Hawat, formerly known as Colonel Falkenberg, bought 1,000 additional shares, sending us over the 459 billion isk mark and earning Zepher a Supreme Protector's Tip of the Hat™. A New Order shareholder by another name is just as sweet. 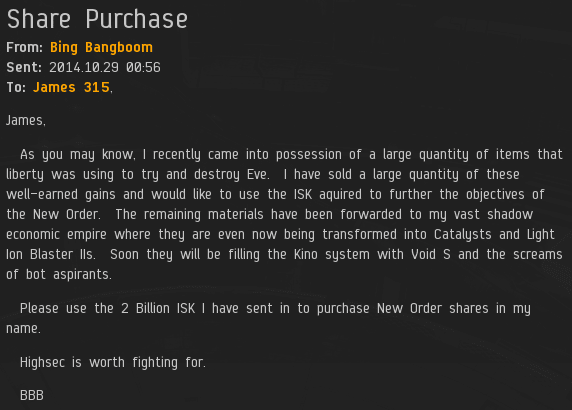 Bing Bangboom received a windfall and wanted to share. He bought 2,000 additional shares, sending us over the 460 and 461 billion isk marks and added another Double Supreme Protector's Tip of the Hat™ to add to his collection. To read more about his adventures and the circumstances of his recent acquisitions, you can head over to the MinerBumping Forum and check out his new thread.

Good news all around. And yet, as Agents of the New Order who care deeply about the fate of highsec, we must always be on our guard. Don't get complacent.
Posted by MinerBumping at 18:29