The Martyrs of Highsec #3

"We didn't want that ship/fleet anyway. Our losses have already been replaced." These are the words of the defeated in nullsec. There's only a kernel of truth buried in there: In-game assets can be replaced. They're interchangeable. Not so for the content creators of EVE. Each player who facilitates emergent gameplay is unique. When they are removed from the game, something of value is lost forever. Rather than dismissing such a loss in the nullsec fashion, we acknowledge and treasure the contributions of the permabanned.

If you were a carebear in need of a sympathetic audience, chances are your first stop was the office of DJentropy Ovaert. 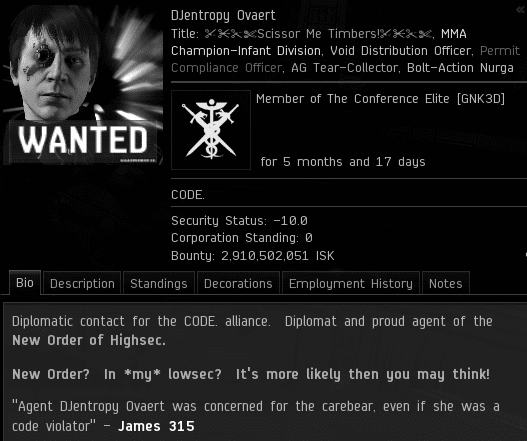 DJentropy loved to help people, even if they were bot-aspirants. In fact, the more bot-aspirant, the better. DJentropy wasn't like all those diplomats who cozy up to their host country's enemies and tell them whatever they want to hear. When carebears came to him, DJentropy told them to obey the Code. 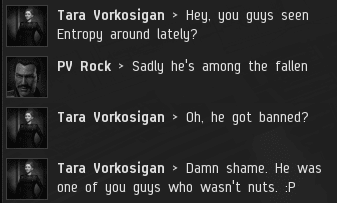 Enemies of the New Order couldn't help but appreciate his honesty. He told the carebears that they were sick. With a gentle bedside manner, he encouraged his patients to buy a mining permit.

But DJentropy was much more than that. As an Agent of the New Order, he knew well that most of the time, the only effective diplomacy is gunboat diplomacy. The bot-aspirants needed to be ganked, wardecced, or even scammed out of their isk before they could be fixed.

An Agent and a gentleman, DJentropy handled himself with dignity. He expected nothing less from the carebears of highsec under his authority. One can only hope they took his lessons to heart.

Zazz Razzamatazz may have been last in alphabetical order, but he was always first in line to sacrifice a gank ship for the Code. 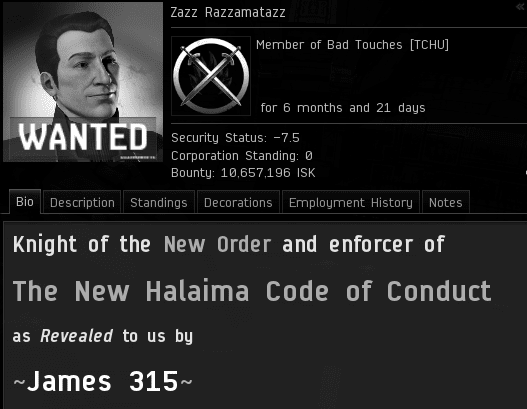 Like many Agents, Zazz had a main who lived in nullsec. The New Order's supporters come from all over. Yet Zazz never thought himself "above" highsec. He knew it was important to give something back to the homeland of EVE players. He gave generously.

Zazz's optimism was boundless. He always approached Code enforcement and the transformations it causes with a sense of wonder and enthusiasm. Intellectually curious, Zazz studied the carebear mind--such as it is--and collected data on the bot-aspirant condition. After exhaustive research, Zazz was delighted (but not surprised) to see confirmation that the Code is the answer to highsec's problems. 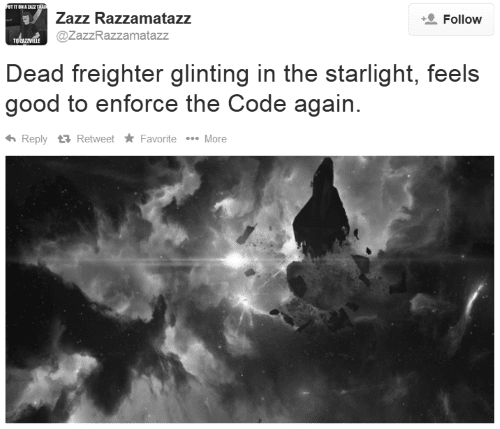 When the sand ran out in his hourglass, Zazz offered us these final words:


"I was told I am not allowed to make a new account. So I guess this is the end of my EVE experience. After all CCP's talk about the sandbox and all that, I'm perma-banned without any explanation or warning.

I know it's the cool thing among EVE players to refer to the game as terrible, but I always loved it.

It was an honor flying with you guys."

No. It was ours to fly with you.
Posted by MinerBumping at 18:34