If Only You Knew the Power of the Code

Time for a pop quiz. I'm going to show you two EVE players. Your task is to identify what they have in common. Ready? 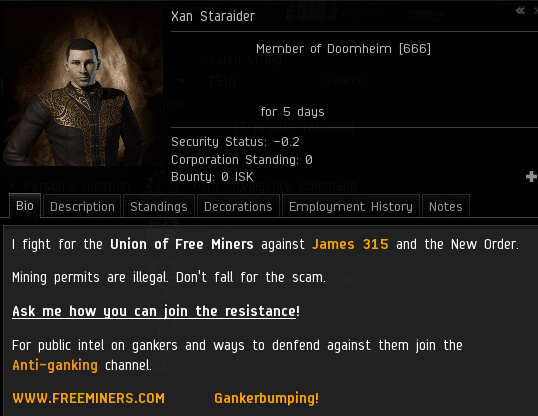 First, Xan Staraider. Several months ago, he was the leader of an anti-Order rebel group. The organization collapsed. As you can see from his membership in the "Doomheim" corp, Xan was biomassed. 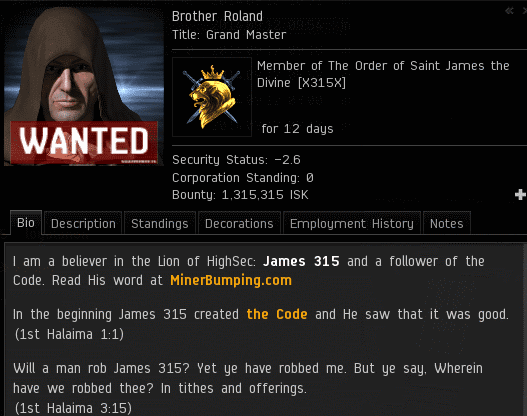 Next we have Brother Roland, an Agent of the New Order and member of The Order of Saint James the Divine. This organization was formed recently and went to work destroying bot-aspirants.

What similarities do the two share? Probably nothing, you would say. But they do have something in common: They are the same person.

A week ago, Brother Roland revealed the shocking truth. He'd joined the Order as an undercover rebel with sinister plans.

You might recall the "Ganking Is Bullying" crowd. New Order diplomat Capt Starfox's investigation into the group was described in a two-part MinerBumping blog post earlier this year.

Xan continued, telling the story of how his rebel group disintegrated:


"Maxime Forge joined the organization and I thought we were off to a good start. Maxime however turned out both belligerent and rude. What is worse is that we spent more time in meetings bickering on what to do next than we did doing what we planned. Everything was a debate. When we finally came up with a plan it was leaked out to Loyalanon and FighterJets. That was devastating. That’s when the wardecs started. About the same time the funding dried up and I was reimbursing everything out of my own pocket. It was a train wreck.

"I knew that there were spies in the anti-ganking channel and I wanted to make a separate secure channel for the white-knights: a gank-intel channel that was password secure that the different AG corporations could use to coordinate. I had asked Astecus about creating an official channel and he told me no way, and that he was disappointed with what little we had accomplished so far. I needed a means for secure inter-corp communication and a way to deal with all the wardecs so I decided to jump ahead and create the Blackwatch. alliance. What a horrible mistake that was. It was during these dark days that my son decided to delete my toon. (Which he is still very proud of, he likes to remind me that he was an honorary member of Code before I ever joined the New Order)."

Xan still maintains that his son biomassed his character. In the blog post about the fall of Xan's organization, I named his son an honorary Agent. Being awarded such an honour at a young age is indescribably powerful. The pride lasts a lifetime.


"About a month ago, I mentioned to my son that I wanted to get back into the game, he mentioned how he was an honorary member of Code, and that is when I came up with my great idea. We’d start over but this time we’d infiltrate Code. We’d build our own corporation and join it to the CODE. Alliance and then cause trouble internally.

"You see, I believe with all my heart in doing what is right. IRL and in game. It is who I am. And despite all the pure nastiness that the carebears gave me for trying to help them, I was still thinking that they were the ones that needed defending.

"I emailed Gorilla a couple times about the plan and never heard back from him. I figured he was busy or just really busy keeping the AG from bickering with each other. It never occurred to me that he was just ignoring me. So I reached out to my oldest friend in the game, and he was more than willing to help out. So the three of us, Brother Roland, Raven, and my son Master42 created the corp, and we went to work. Enforcing, recruiting and preaching your Word. I even put together a site that I thought was pretty decent.

"It was not long after I started reading your manifesto that I started to have my own doubts as to whether I had been on the wrong side all along. I had seen the nastiness of the new carebear first hand. I have also just spent the last couple weeks with some of the nicest people I had ever met in EVE, right there in the MinerBumping channel. I was starting to see the light."

Xan and his small crew intended to destroy us from within. But first, they would need to join the New Order family and interact with our Agents on a daily basis. It's enough to melt even the most hardened of rebel hearts:

Having experienced life in the Order and in the resistance, the truth was impossible to deny: The Code is right! That's why it always wins.

Then came the question of Xan's fate. Originally, he joined the Order in bad faith. Now his eyes were open, and he only wanted to enforce the Code. Would the Saviour of Highsec find room in his heart for mercy? 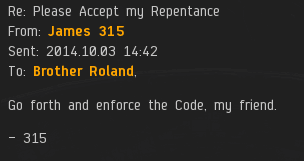 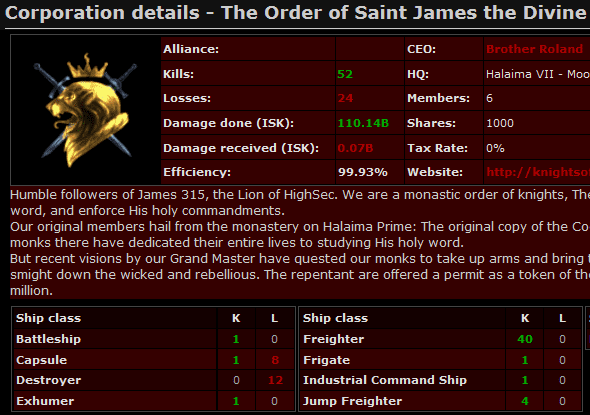 Embracing the Code instantly transformed Xan and his fellow ex-rebels into enormously powerful Agents. As resistance fighters, they had been unable to accomplish anything. Now, as part of the New Order, they found themselves slaughtering dozens of freighters and even a few jump freighters. In a matter of days, a respectable 99.93% efficiency was attained, along with the infliction of isk damage that many nullsec alliances can't achieve. Elite PvP'ers overnight. But more than that, they found the joy of the Code and the New Order family. Reading Xan's description of participating in a ganker fleet on his blog, you can feel the sense of wonder that a true EVE player experiences. 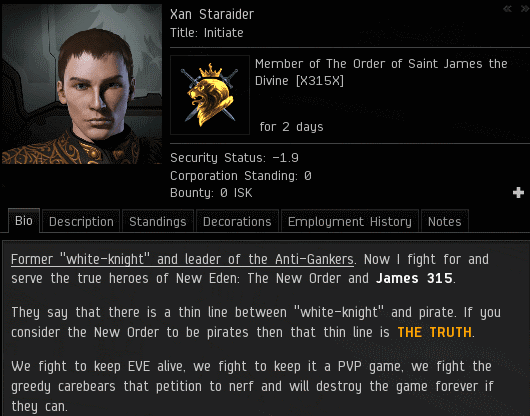 Xan isn't alone in having made the journey from rebel to Agent. In fact, many of the New Order's finest soldiers started their EVE careers on the other side of the Code. We are the most welcoming group in the game. Give the rebels time. If they stick around, they'll discover the truth.
Posted by MinerBumping at 18:27