Agents of the New Order are pretty amazing people. They're known for their personal integrity and keen analytical skills, but these are matched by their finely honed instincts. With a simple glance, an Agent can size up a highsec miner and immediately decide upon a course of action.

Agent Super Perforator noticed a fellow named Domian Audene loitering in Amarr with an unlicensed Venture. It was obvious Domian was up to no good. Super Perforator could have let the miner off with a warning, but instead he chose the less risky option of killing him. Domian sent our Agent the following message in an EVEmail:


"No, you definitely have nothing to do. And you decided to go sum well it's your right but can I be in your schizophrenia not to implicate?"

With those words, everything Super Perforator thought and felt about the miner was 100% vindicated.

Then came the permit dance. The two EVE players engaged in exactly what you'd expect from a competitive PvP sandbox game. It was a series of elaborate rhetorical maneuvers, with each player attempting to steer the interaction in such a way as to advance his own agenda. Today's post is a case study of sorts. For the sake of simplicity, we'll focus on Domian's moves.

Domian took an aggressive stance and attempted to throw Super Perforator off his game. Something told Super Perforator he wasn't in Eansas anymore. Luckily, an Agent of the New Order is never out of his element.

A lot of miners try to re-frame a permit demand as a negotiation. Domian was willing to pay the 10 million isk, but he had demands of his own.

Then came the typical "you only shoot ships that can't shoot back". This charge is ineffective against our Agents--elite PvP warriors all. Entertaining such logic would only encourage miners not to carry weapons and then demand everyone leave them alone because they can't shoot back. (Actually, miners do this anyway, but still.)

Domian wanted some information to use against his opponent. Giving Domian the benefit of the doubt, he was seeking in-game information. The same as when a carebear wishes death upon an Agent. Real life, not in fictional virtual game space and in real life, in-game.

Domian poured contempt on Super Perforator and everything he stood for. He delivered a fire-and-brimstone sermon about honourable combat. This, too, was ineffective. Our Agents already have a Code. They don't need carebears to write one.

You've often heard me say, "my wallet is filled with the isk of those who claimed they would 'never' pay". Eternity is shorter than you might imagine.

At this point in the conversation, Domian realized he was having trouble conversing in English. He requested a copy of the Code in his native tongue. He probably assumed Super Perforator wouldn't have one. 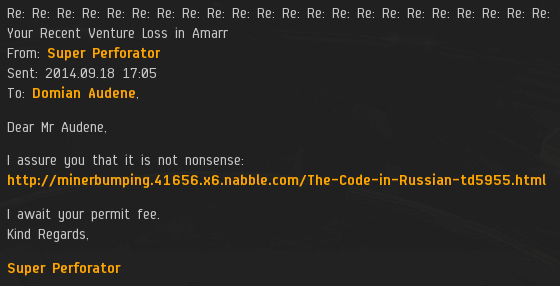 He was wrong. Agent Salah ad-Din al-Jawahiri's The Code in Russian strikes again! 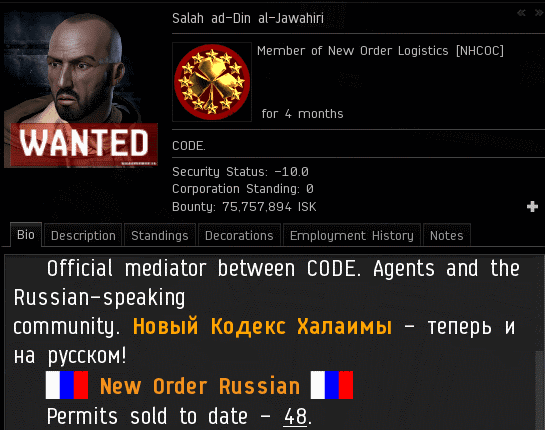 Domian went silent. He didn't have the courage to buy a permit yet, but he did have his very own copy of the Code in Russian. It was another smashing victory for the New Order. Nevertheless, Domian's lack of a permit resulted in Super Perforator ganking his Venture in Amarr again.

Each day, our influence grows--even among previously unreachable groups of highsec dwellers. I look forward to the day when every man, woman, and child in highsec has read, understood, and formally agreed with the Code. It won't be long now, my friends.
Posted by MinerBumping at 17:42