There's no such thing as a random act of violence. Not when the New Order is responsible for the violence, anyway. Each gank is meant to impart a lesson--upon the gank recipient and highsec as a whole. Let's see what we can learn from some lessons that took place during the week of October 12th @ 00:00 EVEtime through October 18th @ 23:59 EVEtime. 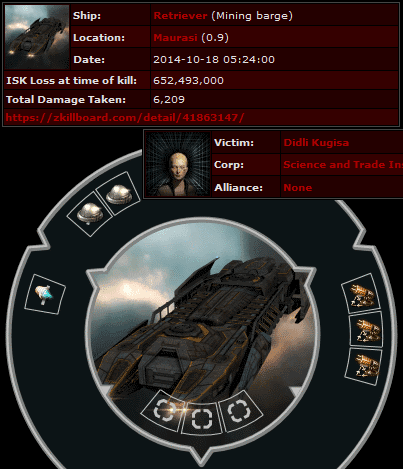 KILLMAIL
Pay attention to details, my friends. Didli Kugisa lost a fail-fit Retriever. So far, nothing out of the ordinary. Then we look at its value: the Retriever was worth 650 million isk! Another significant note: the gank was performed by Agent Ilithyia Borgia in a 0.9 security system. Imagine being so bot-aspirant as to spend 650 million isk on a mining barge, and to choose to spend one's days mining in a 0.9 system.

I noticed Ilithyia Borgia is ganking miners at Maurasi (0.9) / The Forge - this is a change from usual ganker tactics. I am not an expert but I suspect she is using higher grade implants than normal or some other tactic. Maybe someone can shed some light on this.

Maybe someone can shed light on this. Agent Ilithyia explained: "What the outlaws don't realize is I don't need 'higher grade implants' or 'other tactics'. I have The Code implanted in every fiber of my being and my only tactic is to enforce enforce enforce." 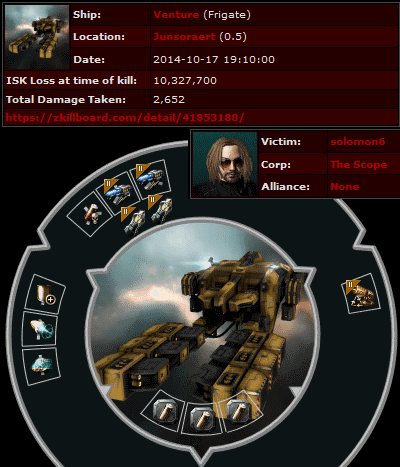 solomon6 lost an unusually fail-fit Venture, which was ganked by Agent master42 of The Order of Saint James the Divine corporation. I know what you're thinking: "It's just a Venture, you're killing new players, this is going to bankrupt CCP, etc., etc." But the story doesn't end there. solomon6's Venture fit was a direct result of bot-aspirancy. And bot-aspirancy corrupts a miner to the core, the very core. So it should come as no surprise that Agent master42 found this inside the Venture: 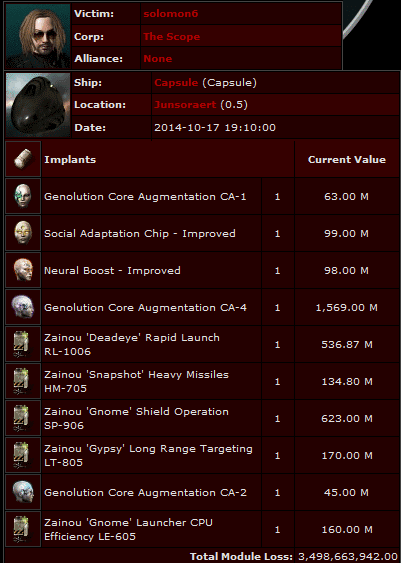 KILLMAIL
Our man solomon6, the "new player" who was innocently puttering around in a Venture, just trying to learn the game? He concealed a pod worth 3.5 billion isk. He would've gotten away with it, too, if not for The Order of Saint James the Divine. No more excuses. Venture pilots must obey the Code, no matter how innocent they try to appear on the surface. 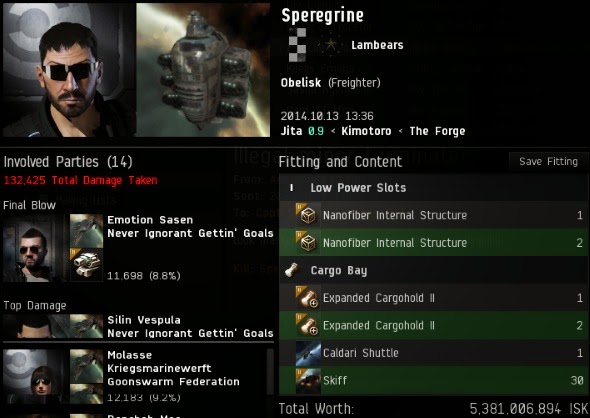 KILLMAIL
The next lesson is about cutting the head off the snake. Speregrine was caught illegally transporting 30 unlicensed Skiffs through Jita. The freighter was the head of the snake, and the permit-less Skiffs were the body. They withered away. Agents Silin Vespula, Molasse, Gad'ui, Alexander Mittani Gianturco, Benchab Mas, Alex Gianturco, Emotion Sasen, Mittani Alexander Gianturco, Turkey Baster, Ikolo, ParticleKnight, Twizzlespark Celes, Amyclas Lacedaemon, and Alexander Sanen were responsible for this kill.


You might assume the 4.3 billion isk pod of an autopiloting freighter would make the Pod of the Week. You'd be wrong, because sadly there was an even worse offender this week: 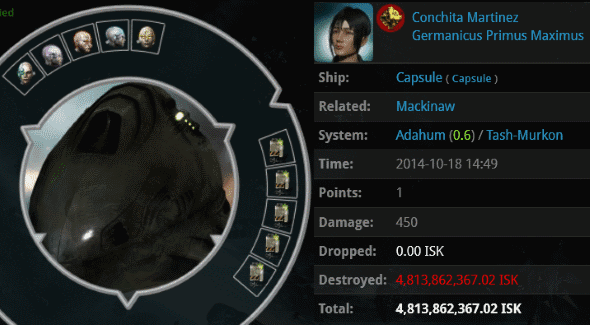 KILLMAIL
Conchita Martinez never gave a second thought to the Code. She thought EVE was about AFK mining in a fail-fit Mackinaw and stuffing one's pod with as many implants as possible. The aptly-named Agent Carebears' Nightmare taught her otherwise; EVE is about the Code and showing respect for my vision for highsec. 4.8 billion isk worth of implants were destroyed. A teachable moment, indeed! 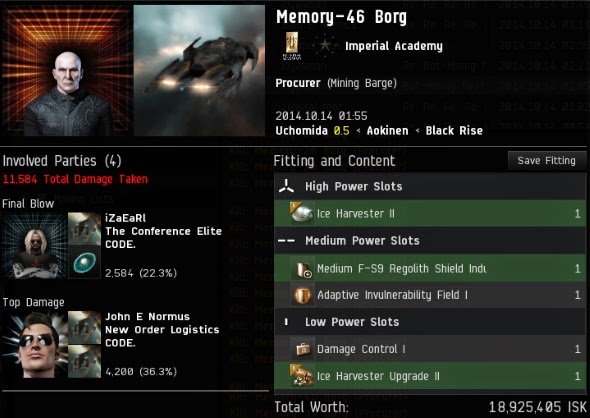 Now for the grand finale. Memory-46 Borg was obviously a bot-aspirant. His name attested to that, even if he was mining in a tanked Procurer. What makes this kill so special? Remember what I said about paying attention to details. Look at the weapon that Agent iZaEaRl was using. It's the icon for a smartbomb. Think about it. Savor it. Oh yes. 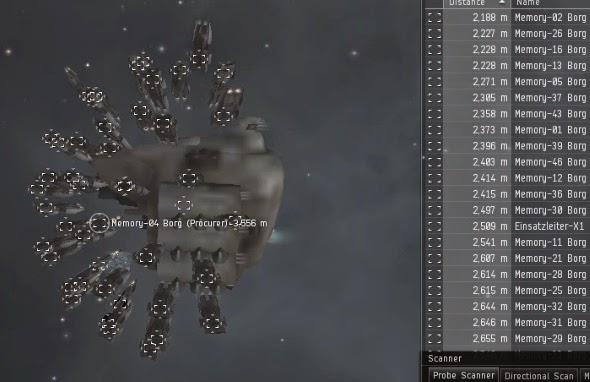 There's nothing quite like smartbomb Megathrons. The endless nerfs to suicide ganking have made the smartbomb ganker virtually extinct. It takes a truly bot-aspirant mining operation to bring the smartbombers out. The Memory-## Borg gang was brought to our attention when concerned locals notified our Agents. I'm sure the Borg have been petitioned many times, but no action was taken against them. In short, the locals reported the Borg to CCP, and then to the New Order. If bot macros aren't detected, CCP considers these reports irrelevant. We don't.

According to the BATTLE SUMMARY, 44 Procurers and 43 pods, totaling more than 4 billion isk, were destroyed. The enforcement was carried out by Agents John E Normus, Mildron Klinker, iZaEaRl, and loyalanon. 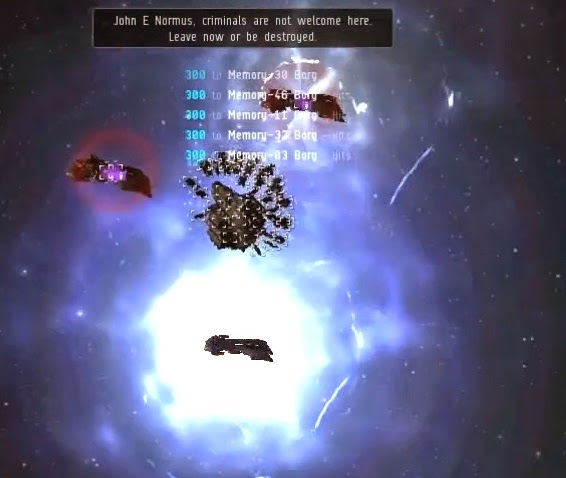 You can watch the spectacular attack on the YouTube video. If you watch the video, you'll notice another very important detail about this operation... 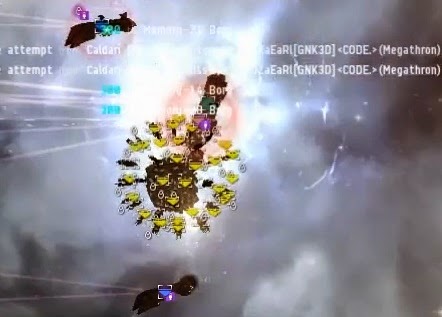 Smartbombing as a gank technique has been nerfed so much over the years that even four battleships with a full rack of named smartbombs, in a 0.5 security system, couldn't bring down all the Procurers, or most of their pods. Not in one attack, that is. So our heroes came back. Forty minutes later. 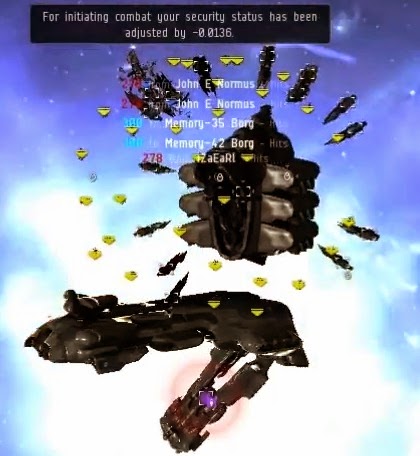 The remaining Procurers--and all the pods--were still sitting there, waiting. Our heroes smartbombed them all again. This time, the rest of the Procurer fleet was wiped out, along with each pod.

My friends, there are only two sides in this fight. You can side with the bot-aspirants who make massive fleets of miners and sit in their pods for 40 minutes after they've been attacked. Or you can side with the heroes who bring smartbomb battleships to kill them all. Which side do you think represents the true spirit of EVE? Choose wisely.
Posted by MinerBumping at 22:04