Some say EVE is dying. Maybe it is, maybe it isn't. All I know is, our Agents are hard at work to keep the game alive:

Apoloclies Lauridian was getting bored of mining in highsec. He may have been close to quitting the game. Now, thanks to the New Order, CCP can expect the miner to spend $55,000 on PLEX. (Personally, I'd pay 10 million isk for a permit.) 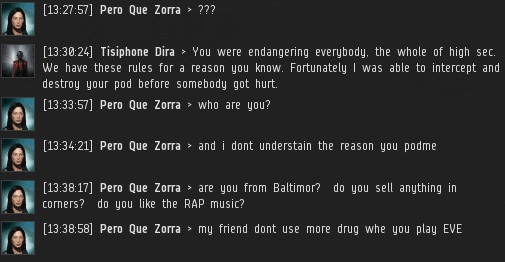 Some carebears always look for the most complicated explanations for why we do what we do. Don't overthink it. Take the Code at face value.

If you stand up for what you believe in, you'll become a target of criticism. Fear not. This is how history is made.

SpliffTwist Chent-Shi thinks if the carebears get as much experience with EVE as we have, they'll win. He's wrong. Our Agents are much more efficient, since their EVE time is spent at the computer. Carebears can log years in EVE, but what percentage of that is wasted by being AFK? 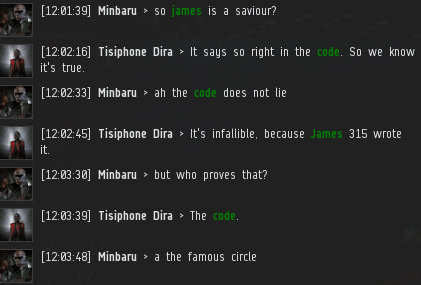 Minbaru is finally getting it. You can't beat a circle--it has no weak points.

You'll need to click this image for the text to be legible. It's the usual: A highsec miner sharing his hopes and dreams with an Agent.

Epic Glacier is behind the times. His message should read, "I'll never pay you a CALDARI CITIZEN 14330909 fucking homo." Gotta keep it clean. 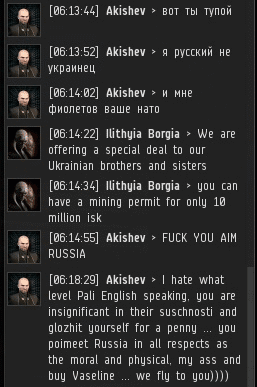 The New Order has gone to great lengths to help our Russian brothers and sisters. Agent Salah ad-Din even translated the entire Code into Russian. But in a pinch, you can teach a Russian to speak English by using Ilithyia Borgia's method.

Now we have the rest of Apoloclies' backstory. Do his motives back more sense, or is it still more logical to buy a 10 million isk permit than $55,000 on funding for rebels? Go with the permit. Besides, funding the rebellion isn't as easy as you'd think. A lot of that money will probably end up in the hands of pro-Order forces.

Miners have very strong opinions about our "real" agenda. Transparency is overrated, I guess. We shout our plans from the rooftops, but they still don't get it.

Notorious highsec "mining consultant" Kalynn Shardani practices what she preaches. I still think these so-called consultants are running a racket. Do miners really need to pay someone to teach them how to produce tears? 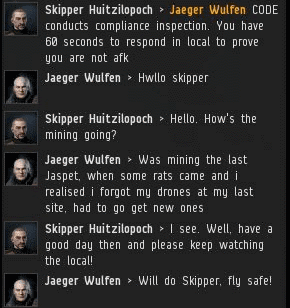 By contrast, a Code-compliant miner is a happy miner. Contact your local Agent and learn how you can join the New Order family today!
Posted by MinerBumping at 19:08