Too Toxic for the Rebellion

Earlier this week, we reported that CODEdot exceeded 1 trillion isk in damage inflicted against our enemies for the month. During October alone, the New Order and its allies have incinerated at least 219 freighters and 15 jump freighters--surpassing even the death tolls of Burn Jita events. We've made no attempt to hide or even vary our freighter-killing activities. Everyone and his alt knows that this has been taking place in Uedama, in plain sight. This leads to an obvious question, one which is asked all the time: Where are all the rebels? And why haven't they been able to stop these regular, predictable ganks?

To find out, we once again turn to our intelligence operatives. They have infiltrated all known anti-Order resistance movements, including the "Anti-Ganking" channel. 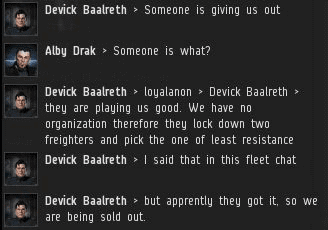 The rebels are aware, of course, that their every movement is being watched and their every word reported to highsec authorities (us).

The success of our intelligence network has demoralized the rebels--not that they need to be demoralized more than they already are.

Of course, most of the time, anti-Order rebels don't busy themselves trying and failing to stop freighter ganks. The lion's share is spent either being AFK or ranting and raving about the New Order in their channel. 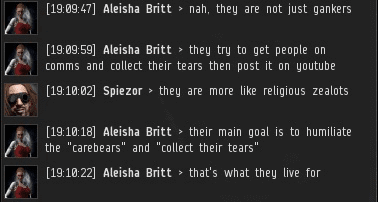 Rebels like Aleisha Britt belong to the Veers Belvar school of thought: "Gankers make carebears cry! Ban them all!"

In truth, gankers don't make carebears cry. We do not force miners to shed tears any more than we force them to make Nazi comparisons or file harassment petitions. The carebears do that just fine on their own. We provide content, and it is up to the carebear to determine the way he or she will respond. 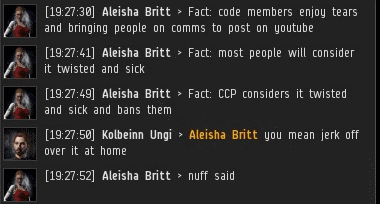 It's worth pointing out that a carebear's tears often violate the Code, which requires them to be respectful in chat and avoid the use of profanity. The Code also requires gank recipients to show good sportsmanship (saying "gf" in local, for example). Some accuse us of "harvesting tears", but our Code has demanded the very opposite from the carebears for years. No one in EVE has done more than the New Order to encourage appropriate behavior.

At times, the outrageous conduct of the carebears offends even the Anti-Ganking crowd. Aleisha Britt was blocked when it became clear her tirade wasn't going to end.

Yet Aleisha is more the rule than the exception. Amusingly, the rebels get so worked up that they sometimes wardec each other!

Naturally, the toxic environment gets blamed on the enemy--much the same way a carebear's tears get blamed on the ganker instead of the carebear. 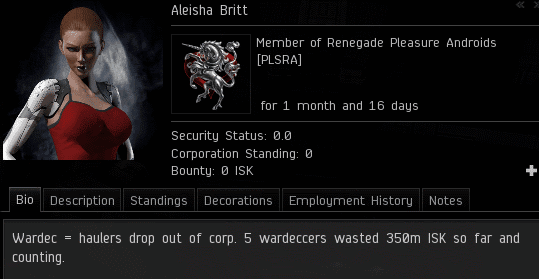 As for the carebear who was too toxic even for the rebellion, she belonged to a familiar corporation, Renegade Pleasure Androids. 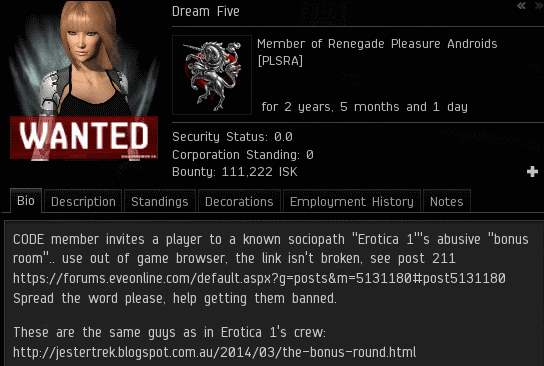 ...Whose CEO is already earning herself quite a reputation.
Posted by MinerBumping at 17:53