The Freighter Pilots Strike Back

There's a very dangerous freighter corp prowling around highsec these days. It's called Renegade Pleasure Androids. As far as we can tell, the corp is comprised mostly or entirely of one bot-aspirant with many alts. They all violate the Code. 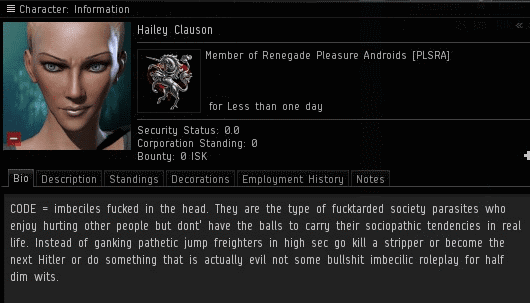 You might recall one of these individuals, Hailey Clauson, who was featured in a Kills of the Week post back in September. Hailey lost an AFK jump freighter. 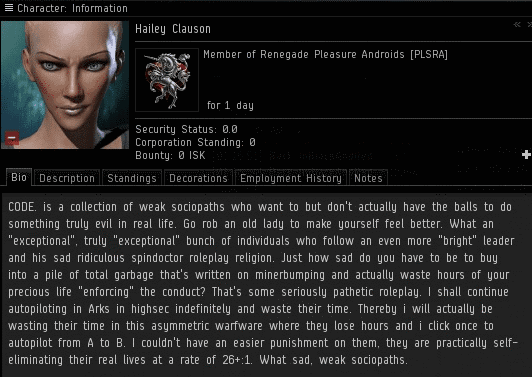 She wasn't happy about it. Hailey preferred that our gankers "kill a stripper" or "do something truly evil in real life", and leave her freighters alone.

No strippers were harmed--not by members of the New Order, anyway. Our gankers continued to enforce the Code. The Renegade Pleasure Androids returned to Uedama several weeks later. One of their freighters was popped while AFK autopiloting. Less than two hours later, another met the same fate.

Now it was time to get serious. The next day, the CEO of Renegade Pleasure Androids, Dream Five, took to the forums. She rallied the people of highsec, urging them to join a "CODE elimination campaign". (If you can't access the thread on EVE-O, you can read the Eve-Search version instead.) And what did this campaign entail, exactly? Scouts and escorts remote-repping freighters? ECM ships jamming our gankers? Counter-bumping? Wardecs?

Nope. She just wanted CCP to ban everyone. Naturally.

You might assume Dream Five based her arguments on the Bonus Round scandal. Actually, it wasn't until 201 posts into the thread that she even found out Erotica 1 had been in CODE., at which point she edited the OP to add the crime to the list.

Dream Five's call for permabans was based on the New Order's practice of ganking freighters and offering them mining permits. She said this was humiliating to freighter pilots. In addition, bans were needed because I'm "self-aggrandizing" and it's "slanderous" to call people bot-aspirants.

As time went on, Dream Five grew more and more excited. Every detail she discovered about the New Order made her more certain that permabans were needed to stop the ganks.

This left open an important question--whether the EVE community would indeed rally to her cause.

Unfortunately, Dream Five was met with nothing but ridicule from her fellow EVE-O posters. Only Anslo expressed support. 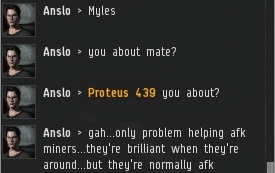 You might remember Anslo from his failed anti-Order "Proveldtariat" movement, which collapsed nearly two years ago. He still holds a grudge.

Dream Five got called out on her true motive, the desire for revenge after her freighter losses. She called the loss of her freighters a "tactical move".

In the end, Dream Five saw no alternative but to spam her own thread with requests for player bans. She didn't like the way people replied to her and pointed out the error of her ways. Nor did she appreciate the ever-present opportunity to purchase mining permits for her freighter pilots. At her request, ISD locked the thread. Thus, another "CODE elimination campaign" ended in ignominious defeat for the rebels. The New Order was victorious once more!
Posted by MinerBumping at 18:47