The Voice of Gamis

Tweets, broken English, angry carebears, and victory. What do these things have in common? 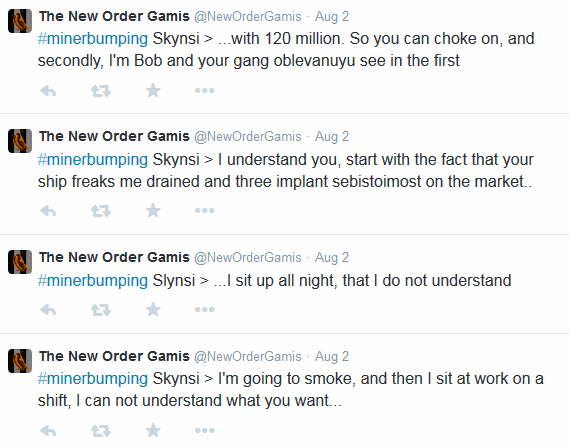 It can only be @NewOrderGamis!

Agent Kalorned is a man on a mission. He's done such a good job supervising the miners of the Gamis system that a promotion was inevitable. 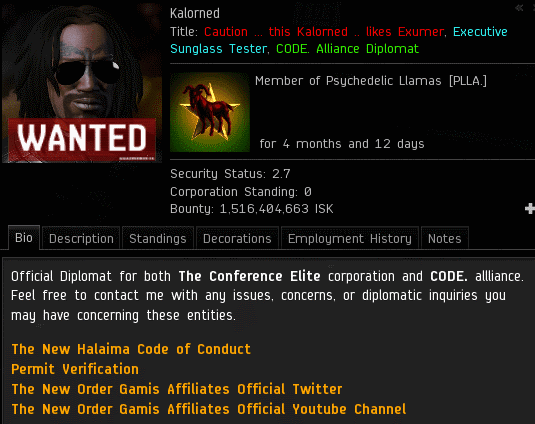 With the latest additions to the New Order diplomatic corps, it won't be long until everyone in the EVE community loves us.

Kalorned has made a name for himself, especially in Gamis. Does a particular highsec system hold a special place in your heart? Join the New Order and begin enforcing the Code there. You'll become breathtakingly powerful, and an instant celebrity.

Like all celebrities, Agents of the New Order get trash-talked by the occasional critic. And yet heroes like Kalorned keep calm and carry on with the Code. Amazing fortitude.

When your enemy tells you to commit suicide, it means he knows he can't kill you himself. Agents of the New Order are known for their invincibility, so remarks like Mazakjr's are commonplace.

We talk about gankers a lot on MinerBumping, but this blog was founded on the truths revealed through the bumping of miners. Kalorned carries a torch for the traditional art of miner bumping.

When you bump a miner, you impart an extraordinary gift upon him or her: You're providing the miner with emergent content. They usually don't realize you're doing them a favor until after the bumping stops, though.

Techlon has been mining in highsec for more than five years. He's developed a lot of bad habits in that time, and he's collected a lot of misinformation.

You'd be surprised how often miners assume I've been permabanned. In fact, it came up in one of the very first MinerBumping posts ever, back in August 2012. When a miner had trouble linking my name in local, he started telling everyone I must have been banned. The rebels haven't gotten any smarter since then.

Among the rebel miners, conspiracy theories are more widely consumed than actual news is. The more baffling and nonsensical the theory, the better. These days many rebels honestly believe MinerBumping is secretly written by someone else. Why wouldn't I write my own blog? Who does write it? Is The Mittani somehow to blame? Or the NSA? One can only guess.

Kalorned and his ganker alts, listed by penelope pissy-pants, have improved Gamis a great deal. The bots and bot-aspirants don't like this. Maybe he's my alt, maybe we're all banned, or maybe--just maybe--Kalorned is an informant for CCP. Confusion is a carebear's default state. The only cure is a steady diet of truth. Every carebear in highsec needs to read MinerBumping each day. For best results, they should read the Code a few times a day, too.
Posted by MinerBumping at 18:34