The Martyrs of Highsec #2

It was a morning like any other--calm, quiet, and ideal for punishing Code violators. A group of Agents did a little practice PvP in lowsec to sharpen their skills for the elite highsec combat that made them famous. Then, out of the clear blue, one of them was banned. Then another. This was no coincidence. Reports kept coming in of New Order Agents being banned. Confusion reigned throughout the day, but there was no mistaking that a coordinated ban wave had taken place. The fearful and unprovoked act inspired widespread outrage.

The events of September 10th were an unprecedented tragedy. Yet there were those who celebrated the loss of EVE life. Extremist carebears were seen dancing in the subreddits. The New Order has always had its enemies, but it was shocking to see bot-aspirants cheer the permabanning of innocents.

To the forces of carebearism, the New Order stands as the most powerful force for freedom in EVE. We hold them back, lest they plunge our beloved game into the darkness of a risk-free theme park. The New Order will continue to fight, and will always remember those who have fallen in the defense of the true spirit of EVE.

When carebears want to scare each other at Halloween, they share stories about D400. He inspires dread among the rebels of highsec. 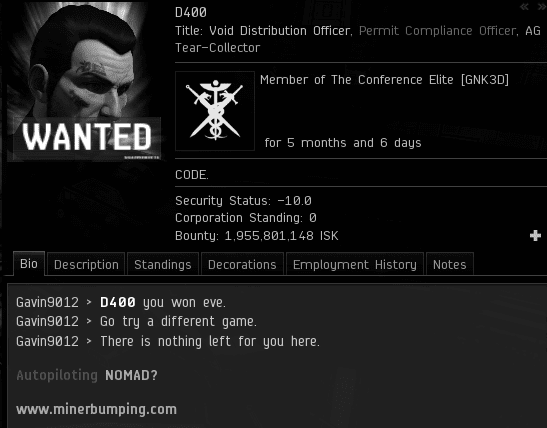 At a time when "solo PvP" more closely resembles "small gang PvP", D400 proved the power of the individual ganker. He has been called The Greatest Solo PvPer Ever. 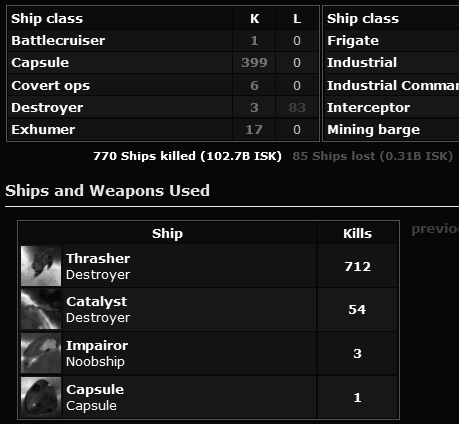 D400, acting on his own, routinely inflicted more damage than entire nullsec alliances. He loved popping pods. He knew implants are not something to be taken for granted. In a single month, D400 destroyed 399 pods. Hundreds of his Thrashers were sacrificed, but he was always willing to give up more. 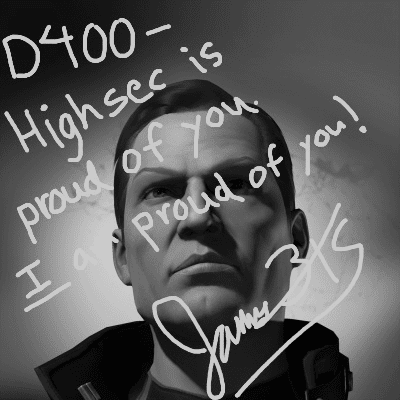 For his contributions, D400 received the rarest of honours: A personalized, signed portrait of me. He can't play EVE anymore, but he has the consolation of knowing he already won the game.

If you woke up one morning and discovered your corp's new CEO was Jerry Rin, someone probably made a terrible mistake. 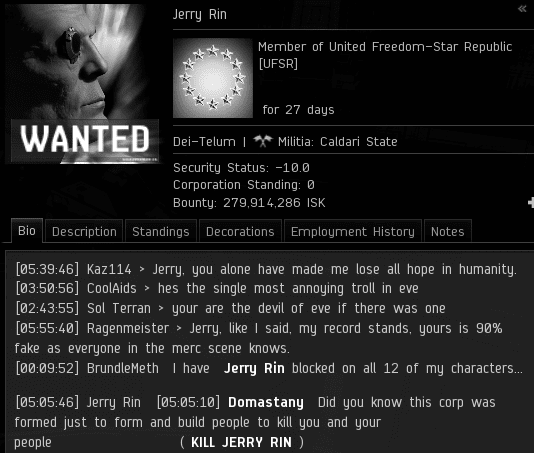 Jerry loved all forms of highsec PvP. Ganker, awoxer, scammer... He did it all. In one of his most famous triumphs, Jerry helped smash the Damned Defeat corporation after a daring awox. He continued to suicide gank under the "Damned Defeat" corp name for months to come.

Some people say he was a sociopath. That he had to be removed from the EVE community. But the Jerry I knew was a man of extraordinary personal integrity. Through all of his corp infiltrations and sabotages, he never forgot who he was. And none of his friends will forget who he was, either: The scammer with a heart of gold.
Posted by MinerBumping at 17:49