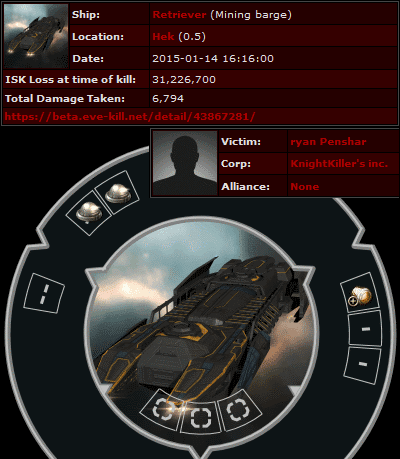 ryan Penshar took it upon himself to mine in Hek using a fail-fit Retriever. Clearly, this was the handiwork of a new player. Our Agents made a judgment call and killed him.

Luckily, the New Order doesn't engage in senseless violence. Ours are the most justifiable, well-reasoned killings you'll ever see in highsec. To aid in the young Retriever pilot's education, our Agents took time out of their busy schedules to answer ryan's questions about how to avoid being ganked in the future. Yet another service from the New Order, free of charge--and another way we build ties with the highsec miner community.

Agent Perspicacious Bukandara politely requested ryan's killmail. But the miner was prickly right from the jump. He demanded to be called "LT" or "Ryan". 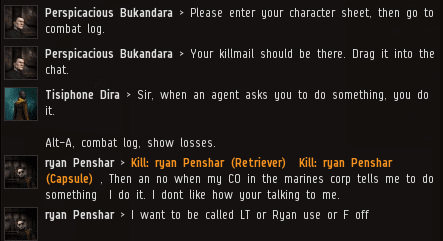 Our Agents taught ryan how to find a lossmail and link it in chat. He didn't bother thanking them. Instead, he said that he would only obey his commanding officer in the Marines. He still wanted to be called LT, which is something he should've considered when creating his character name. 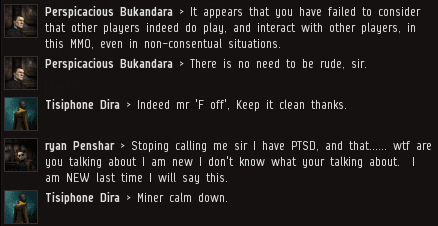 In the midst of his feverish complaints about being new, he mentioned that he had PTSD, and for that reason, he should be called "LT" instead of "sir". 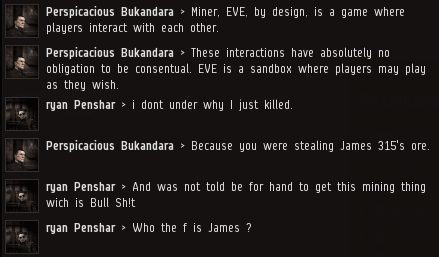 Agent Perspicacious lived up to his name. He patiently explained what kind of game EVE is, and why players can lose ships even if they don't want to. ryan was impatient, though, and didn't seem to want to invest the time needed to learn all of highsec's backstory.

ryan was confronted with evidence that he was an AFK miner. He immediately changed the subject by invoking his real-life military service. Not this again! If ryan really is a soldier, he may have missed his true calling: He deflected like a natural space lawyer.

Perspicacious located the real source of the problem, and his diagnosis had nothing to do with PTSD. The problem was, ryan had never bothered to read the Code before. Our Agent intended to remedy this.

ryan had an answer and an excuse for everything. He even refused to visit MinerBumping to read the Code "because of hacking"... 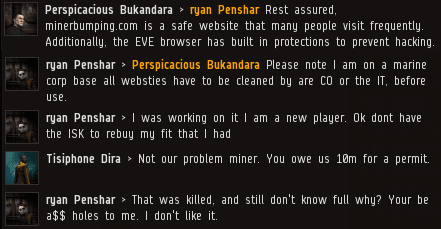 ...and once again, the excuse related to his military service. If anyone in the Marines is reading this, please tell all the IT departments to allow MinerBumping, if they haven't already. This is especially urgent at the one Marine Corps base where no one says "sir". 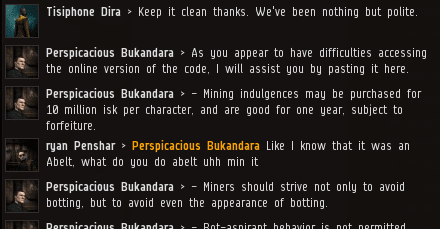 Our Agents are nothing if not accommodating. Because ryan refused to go to MinerBumping, Perspicacious began systematically copying the text of the Code into the chat window. Guess if ryan showed any gratitude for this service?

ryan expressed his gratitude by reporting Perspicacious to a "friend" who works as a GM for CCP. ryan explained that he didn't like the "changing" rules because he's an Iraq war veteran. He even accused our Agent of not helping him enough. That came as a surprise, considering how much time they were spending on the miner. No good deed goes unpunished.

Agent Tisiphone Dira was amazed. This was the first time a carebear petitioned an Agent for addressing him as sir and "not helping him". 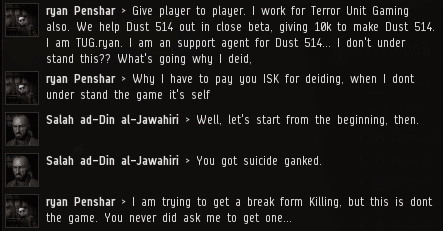 More complaints and demands followed. ryan claimed he came to EVE--a game best known for its unforgiving environment and non-consensual PvP--to "get a break from killing". He also said he was a support agent for Dust 514. You might think Dust 514 is a particularly bad game to play if you want to get a break from killing, the since the whole purpose of the game is shooting people. However, I'm told that after everyone stopped playing Dust, the servers became very peaceful. 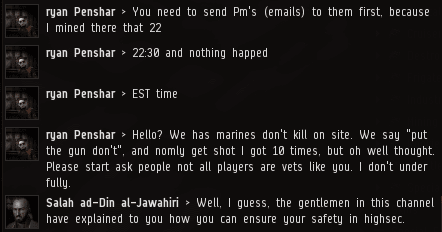 Despite our Agents' best efforts, the matter was not resolved to ryan's satisfaction. From his point of view, it's wrong to gank miners without convo'ing them first, because U.S. Marines always give their targets ample warning before shooting them.

It's true, our Agents don't follow the Marines' rules of engagement. We follow a set of rules that we feel is even more suited to policing PvE in empire space. It's called the Code. We're not trying to save Iraq or the Middle East--just highsec. Let's all respect each other by following the Code when we're in highsec. Fair enough?
Posted by MinerBumping at 20:13